For its latest exhibit, the Hofstra University Art Museum has gone pop. The Lyon, the Which and the Warhol features selections from two major donations to Hofstra’s permanent collection created by photojournalist Danny Lyon and pop artist/icon Andy Warhol. Artworks by Edward Weston, Imogen Cunningham and others constitute the Which, connecting the dots between Lyon and Warhol through shared methods of near abstract portraiture and exploration of the relationship between form, structure, space and composition through physical object presence.

In celebrating the museum’s 50th anniversary, executive director Beth Levinthal states, “The Lyon, the Which and the Warhol encourages viewers to consider how artists employ portraiture and physical presence as well as other tools to break the barriers of societal stereotypes.” 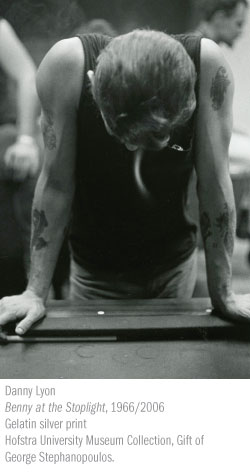 It’s this subculture, seeded by the sexy biker cool of James Dean and Marlon Brando and the uber-glamorous aura of Marilyn Monroe that Warhol both fetishized and helped to popularize. From his perch, Warhol had a unique way of quietly looking down his nose at the material world while simultaneously glorifying it and making it larger than life; this may very well be the core ethos of the unassuming yet cynical paradox behind the nebulous notion of “hipster cool” as we know it today.

Warhol ties into this exhibit thanks to his Polaroid fetish. Already well versed in the practice of making “still films” by the 1970s, Warhol was obsessed with the evolving photographic technology of the day. Perhaps it gave him ever-increasing access to the artistic tools and ideals he valued most: Glamorous repetition, efficient workflow, saturated pop presence and immediate, ambiguous sexuality. He pointed his lens at his celebrity friends, Factory acolytes and dirty-rich patrons as only Andy could, manipulating their likenesses to create expansive silkscreen projects and to create his signature avant-pop portraits with their dominating sense of pure size and star power.

To understand Warhol is to understand his subversive thirst for instant gratification (which the Polaroid certainly provided) and his ability to delay or even obliterate gratification all together—as seen in his laconic, formless and often frustrating film experiments. In the Hofstra exhibit, Warhol’s portrait “Evelyn Kuhn,” a simple snapshot of the ‘60s model and a human skull side by side, shows that regardless of the medium, Andy’s genius was in using others to fill his own void (page 84). In this photo there is no pretension, no attempt at style, no sense of the artist at all. It just looks like a love letter to Vivien Leigh and Alfred Hitchcock. At a glance we can see the pulp of pop: Glamorous, vapid, provocative and ultimately perishable. Andy knows with perfect ease what we’d all just as soon forget—everything dies and, despite all our preening and posturing, form eventually becomes formless.

The notion of transience, space and physical presence runs thick through the works of the exhibit’s other strong players. Danny Lyon’s biker portrait “Benny at the Stoplight” (previous page) is brilliant and provocative in its articulation of curvature and the human form in time and space, but it quickly transcends all academic interpretation and bleeds with a nostalgic, smoldering idea of the very “birth of the cool.”

Edward Weston’s “Legs In Hammock” also evokes the emerging sexuality of the ‘60s Dean/Brando/Monroe zeitgeist and does so by using silken bodily curves in carefully composed space to both incite fantasy and create isolation—a kind of psycho-artistic amputation. It’s this casual intersection of beauty and the macabre that ties Weston back to Warhol’s constantly evolving paradoxical aesthetic and also threads him all the way to Hitchcock. 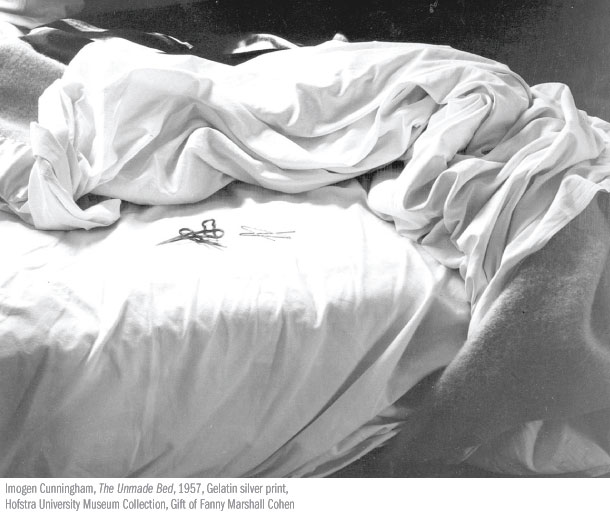 Imogen Cunningham’s “The Unmade Bed” (above) is a quiet standout thanks to its absence of human form. White bedding is pulled back in ruffles and waves, sending out sad whispers to the body that has abandoned it. It leaves a white void (Save for a small pair of scissors. What are they for?!) and invites the spectator to paint the image and tell the story for himself or herself. This photograph is the pinnacle of artwork at large, an empty canvas onto which the viewer can project his or her own imagination. And that’s exactly how Andy would’ve liked it.

The Lyon, the Which, and the Warhol is on view from January 14 thru May 19 in the Hofstra University Museum’s David Filderman Gallery, Joan & Donald E. Axinn Library Ninth Floor, South Campus. For more information call (516) 463-5672 or visit hofstra.edu/museum.