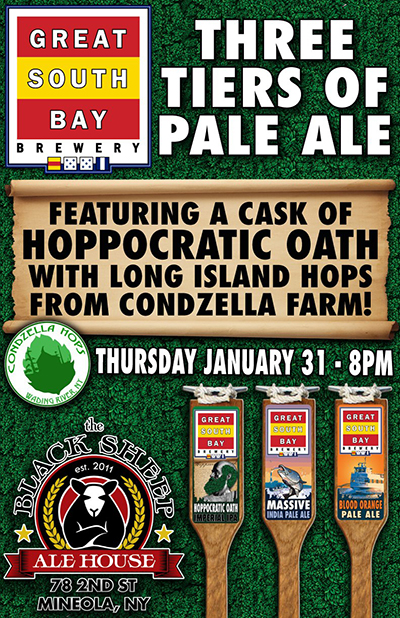 The three-beer event features a cask of Hoppocratic Oath, a 9.00% ABV IIPA, with Cascade hops from Wading River’s Condzella Hops.

“You can’t get any fresher than with hops farmed in your backyard, and that’s why we use Condzella Hops,” said Rick Sobotka, owner and brewmaster of Great South Bay Brewery. “The hops used in our cask of Hoppocratic Oath provide a serious citrus hop aroma with piney floral notes. The smell has a fragrant grapefruit air to it with mild tropical esters. The taste is full of grapefruity hopness, mild tangerine and grassy pine notes, with plenty of other tropical elements to compliment the citrus.”

Great South Bay Brewery released the 2012 batch of Hoppocratic Oath on January 17. The beer debuted in 2010.

Hoppocratic Oath is our salute to hops. The blending of six different varieties of hops over many separate additions throughout the brewing process imparts an immense aroma and flavor with just the right amount of bitterness. While this brew checks in at about 9% alcohol, the huge malt backbone and body comes in to smooth things over into an astonishingly drinkable beer. After one sip you’ll be lining up to take the oath!