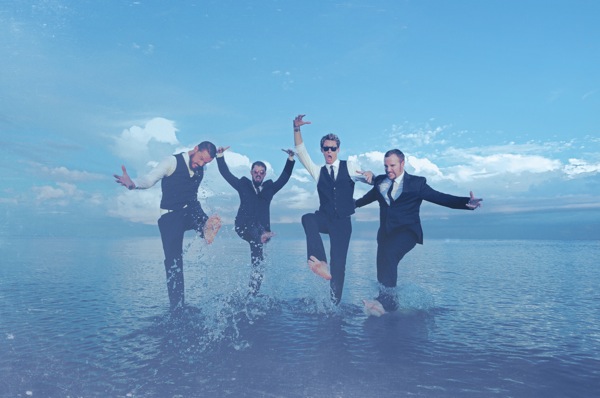 Ballyhoo! started out as a pop punk band but after lead singer/guitarist Howi Spangler discovered groups like Sublime, Goldfinger and 311, their sound transformed into punk rock reggae. (They’ve even been called a reggae version of Incubus) And while the band—including drummer Donald Spangler, bassist JR Gregory and keyboardist Scott Vandrey— has a California vibe, they hail from Maryland, have played with the likes of 311 and Toots & the Maytals and were listed on MTV’s Top 100 Bands to Watch. The quartet is known for its energetic, party-like shows and will be playing music off of its latest full-length, Daydreams, at NYC’s Gramercy Theatre on February 9th. Frontman Howi Spangler answers some questions about the music and New York shows:

Pulse: How do you describe your sound aside from rock/reggae?

Howi: We’ve been referring to ourselves as #punkrockreggaesexmusic as of late!

P: Who would you most like to perform with, and why?

H: I’d love to play alongside Dave Grohl or Billie Joe Armstrong. They’re both super talented and their sounds have been an influence on how I write music.

P: You’ve played on Long Island before—at Ollie’s Point. Did you like playing there? Any plans to play LI again in the future?

H: Yeah, Ollie’s is a lot of fun. The crowds have always been pretty wild, with high energy and an appreciation for our live shows. We’ll definitely be back to LI again! Lots of good friends and a solid fan base there.

P: As a Maryland band, what do you like about playing in New York?

H: We’ve played in NYC many times… There’s a certain energy in New York that’s hard to explain. Similar to LI, there’s just a solid appreciation for live music. We got to play CB’s lounge next to CBGB’s in 2004 when it was still there. Wasn’t exactly playing CBGB’s, but close… We packed a party bus full of 50 friends and fans from MD and unleashed them on the city after pre-gaming the entire way up. Was a pretty amazing night.

H: We actually just finished recording our fifth full-length album last week. We’re shooting for a summer release, but we’re actually pre-selling the album as part of our Hardcore Hooligan package (for hardcore fans). The package includes getting your picture in the album art, advance listening parties of the album with the band telling stories about each song, and a special edition version of the record that will have exclusive tracks. You can find out more at www.ballyhoorocks.com

Check out Ballyhoo! on the Winter Wonderland Tour with openers Kayavibe at Gramercy Theatre on Saturday, February 9th.