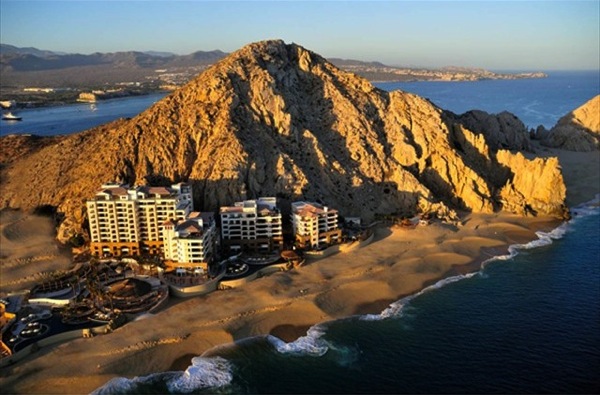 Often, resorts insulate guests from the true jewels of a destination, but Grand Solmar Land’s End Resort & Spa sits in Cabo’s geologic marvel jewel. Spectacular roaring Pacific Oceanfront aside, the towering orange-sandstone Moab-style rock formations surrounding this place make your jaw drop—before the hiking starts. Stones-throw from this guilty pleasure getaway is a hike option between jutting 200-foot-high surf-sprayed cliffs to a private narrow hallway of a beach, which then invites you over rock formation to discover famous Divorce Beach, via its back door. Divorce Beach, for those who remember the original (1968) Planet of the Apes, is where Charlton Heston tragically stumbled upon the mostly buried and irrelevant Statue of Liberty. 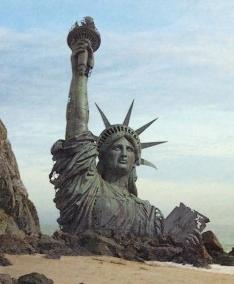 For those who never saw that flick, imagine this: five-star digs on the literal southern tip of Mexico’s Baja Peninsula in the midst of what should be a natural World Heritage Site. 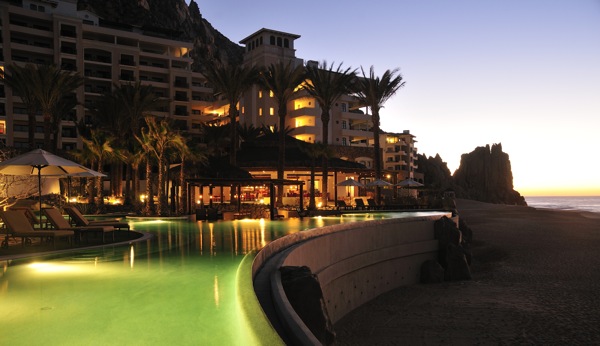 My guilt about staying in a new resort that must have displaced some of Baja California Sur’s wildlife was eased when a few sea turtles came marching my way. Any remorse about blowing my budget that wasn’t eased by the options afforded by my sweetly-appointed room’s full kitchen was evaporated by two incomparable infinity-pool bars. There’s just something about sipping a cocktail chest-deep in water between Mars rock museum pieces and fierce, aqua-blue waves.

While touristy downtown Cabo San Lucas is only a ten minute walk, I couldn’t stop peering from the pool bar up at the Presidential Suite that’s the first to rival the opulence I’ve beheld only in the Kingdom of Brunei. Then, a Tequila Sommelier appears armed with an arsenal of brands, limes, and lore…begin my agave wander 1,000 miles south of the California border.

This wonderland is not exactly affordable Cabo, but living in a stone-encased wonderland by the pounding surf? And, the huge dining room table in my studio suite is allowing me to calmly organize activities in a part of Mexico that is very safe for visitors, and even has drinkable tap water. 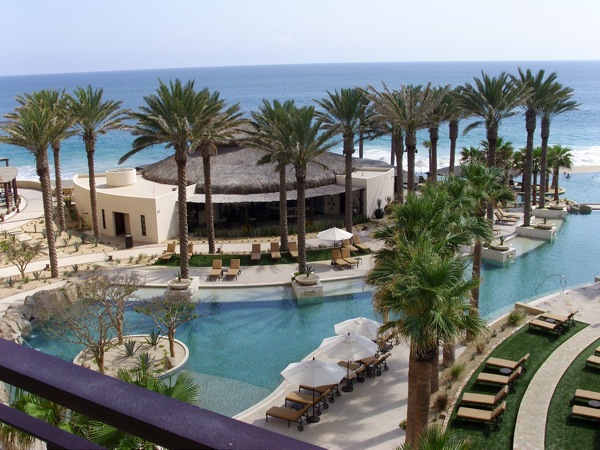 The only danger here is the volatile undertow created by the merging of the Sea of Cortez and the Pacific. You actually need to sign a waiver to go swimming.

* Cabo Adventures (cabo-adventures.com) took me on an enlightening outback safari hike through El Kuelele, a desert cactus-forest sloping toward the Pacific. The entertaining guide-naturalist noted that the plentiful multi-armed cardon cactus can live up to 450 years and grow as high as 40 feet. 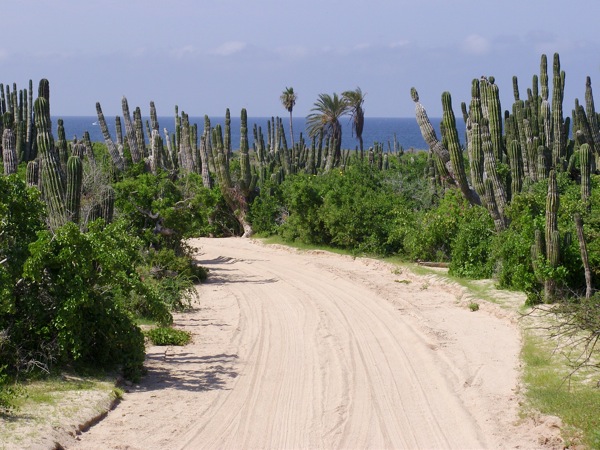 The trek concluded on the beach with a hokey camel ride, but I learned something interesting from the camel trainer who is originally a Saharan Desert Tuareg nomad from Niger. Before the U.S. Civil War, the army imported camels and trainers from the Middle East as western frontier caravan pack animals. One of those camel trainers, a Syrian named Elias, moved to Mexico, married a Mexican, and had a son. His son, Elias Calles, became the President of Mexico in 1928. Cabo Adventures resurrected the animal theme the next day when I didn’t just swim with dolphins, I rode one as it swam. I’ve stared an Antarctic-residing whale in the eye while in a kayak. Gazing into a pool-living dolphin’s eye wasn’t quite as supernatural, but equally hypnotizing.

* Land’s End connects via pedestrian pathways to other sprawling and diverse Solmar vacation communities—all within a godly rock garden on the beach—with stirring restaurant options. The adjoining resorts include Playa Grande and The Ridge Luxury Villas, both upscale. The Ridge, overlooking it all, has an epic outdoor patio on a rock mountain saddle; dueling ocean/desert views and an amazing menu put this restaurant on my all time top-10. Request to dine on outdoor patio.

* Heartfelt charity: the Solmar Foundation isn’t kidding about empowering the lives of disadvantaged local people via optional $10 guest donations—and theirs. I visited two of their facilities, an adolescent job training shelter (carpentry, hairstyling, etc.) and an orphanage for sexually-abused kids. They are making a difference; solmarfoundation.com and casahogarcabo.com.

Cabo Adventures will assist you in enjoying all of the regional hits, including swimming with dolphins. cabo-adventures.com. 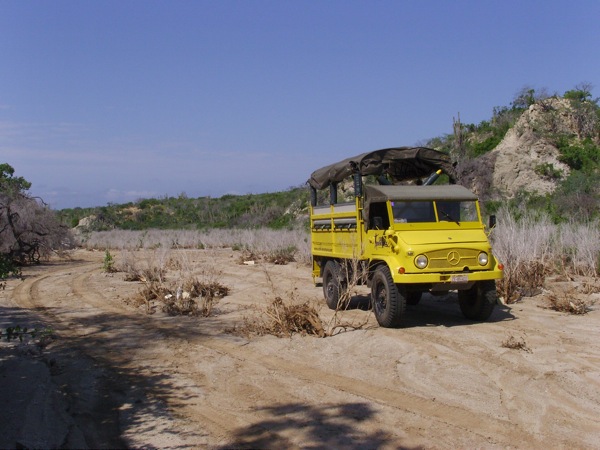 Cabo adventures on the move

Ps, Dear Mom, been meaning to tell you about a special relationship I’ve been hiding in Cabo, Mexico… 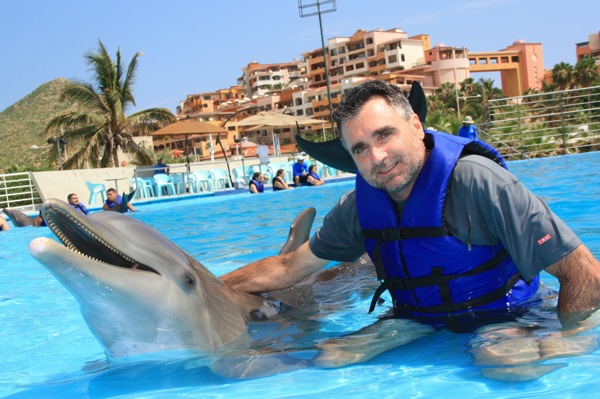 Ps, The Pacific Ocean-side road trip from Cabo San Lucas to Todo Santos on Route 9 ranks as a National Park drive, without entrance fee or tolls. Say hi to the clumsy but harmless, bat-sized butterflies. Those cactus skeletons are porous wood, who knew.