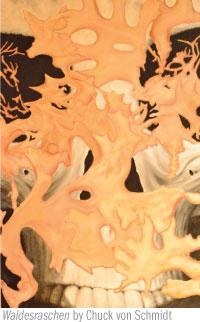 To Chuck von Schmidt, the world is a treasure trove. In his diverse aesthetic, everything from bronze to beetle wings has the potential to convey meaning. Over the years, the Dix Hills-based sculptor has shared his imagination, his spirituality, his humor and his work with audiences and patrons from Alaska to Greece. In March, it all comes back home when his Faces, Inside & Out exhibition of sculptures and other works runs at the Alfred Van Loen Gallery in the South Huntington Library.

Though his art may be exacting and wonderfully detailed, von Schmidt’s approach is not. His willingness and ability to make something out of nothing literally puts the entire world at his artistic disposal. This full immersion method led him down some very compelling thematic paths to some interesting locations.

“For almost twenty years I have been working on a series of conceptual sculptures relating to floods called Antediluvian Memories,” von Schmidt says. “I go to historic flood sites and gather soil and water, photograph the site and note the GPS coordinates, which are printed on the photos. I seal the soil and water in the chambers of an hourglass and mount it in a wooden housing, which I have turned on the lathe and I include a little essay on the historic flood.” This project gave him an excuse to travel to Johnstown, Paducah, New Orleans, Galveston, Key Largo, England, Holland, Dresden, Prague, Venice and others. Most recently Irene and Sandy provided him with grist for additional pieces.

Von Schmidt holds in spades that which you cannot teach: A sense of adventure, willingness to experiment and, above all, the ability to complete the circle that connects his inspiration to his penchant for inspiring others. Through belief and craft, von Schmidt is doing everything he can to obliterate the line between thought and expression and fortify the bridge between intention and result.

Deborah Katz is curating von Schmidt’s exhibition and has strong insight into what makes his work so compelling. “On immediate introduction to Chuck von Schmidt his energy is discharged and he reveals his passion and his humor,” Katz says. “Using a variety of unorthodox materials, the variation in his direction and the physical way his work appears gives the viewer insight into the mind of a true artist. Chuck explores non-traditional ways to allow his personal vision to physically appear. He creates work that shares his commitment and his psyche, while giving a delightful interplay between the physical piece and our comprehension of it.”

His series of the faces of the Buddha, a major feature of the upcoming exhibition, speaks to this well-synergized aesthetic. Designed as a peaceful, yet defiant, response to the Taliban’s 2001 destruction of sculptures in the Afghanistan province Bamiyan (Place of Shining Light), von Schmidt’s representation of the Buddha speaks to the undying power of spirituality and to the artist’s role as eternal torchbearer of all things beautiful in this world, material and otherwise. In our hyper speed, highly polarized present, when civilized culture and tolerance are routinely threatened by hostile differences or rampant indifference, the artists and shamans, not the warriors and headhunters, are called upon to rebuild.

In this role, von Schmidt has never been short on reverence for the physical world or on faith in what hides “behind the curtain.” But meeting Pope John Paul II in 2005 to present a commissioned work certainly jolted his already spiritual disposition. “The high point of my life,” von Schmidt said as he fondly recalled the experience. “In the Vatican, when we were taken into the Clementine Hall, I was placed in the front row with my sculpture. I was the fourth person called up to greet the Pope. He listened to the introduction and thoughtfully caressed the sculpture I held out for him. Then he gave me his hand. When I stood before him and gazed into his eyes it was as if there were only two people in the world at that moment. It filled me with such peace and serenity. I mean, where do you go after that? For a sculptor, the greatest inspiration is Michelangelo and to think that my sculpture now rests somewhere in the halls of the Vatican in the company of his work. That’s as good as it gets.”

Faces, Inside & Out is on display from March 2 to 27 at South Huntington Library’s Alfred Van Loen Gallery in Huntington Station. A public artist reception will be held on March 2, 2-4pm. For more information, call (631) 549-4411 or visit shpl.info.