It’s never been a problem for Italians; their food has always been approachable. But Greek cuisine has to work harder to prove it’s not only for Greeks. Chef Michael Psilakis’ goal is to take Greek mainstream, and it starts at Roslyn’s MP Taverna.

Before earning accolades from Esquire, Food & Wine and Bon Appétit magazines Psilakis was born into an immigrant Greek family living in East Northport. He grew up tasting the flavors his mom created and watching her prepare meals every night. “I was the oldest son of this traditional Greek family that had 30 people over every weekend and parties of 200 five or six times a year,” Psilakis says. “I was making sure people had a drink, making sure everyone was happy, making sure we fed people. I was built to do that job.”

Given this background, maybe it’s no surprise that Psilakis earned the industry’s praise without formal culinary training. He rose to the national stage by elevating his mother’s flavors and in the process forced modern Greek food into the national conversation by earning a Michelin star at NYC’s Anthos.

Had his father not passed away in 2007 Psilakis would probably still be experimenting with modern ingenuity. “After my father’s passing I had an epiphany,” Psilakis says. He describes a vivid scene at his mother’s house when he, his then two-year-old son and his brother gathered to prepare the traditional spit-roasted lamb for Easter. “We’re getting ready to put the lamb over the charcoal. Right before we did, as my father taught us, we wet our hands with water, rubbed the animal down and then seasoned it with salt and pepper.” It was a moment he recalled sharing with his father at a young age. That’s when Psilakis decided to turn away from high concept food to bring traditional Greek cuisine to the masses. “Food no longer was art; that didn’t matter to me anymore,” Psilakis says. “What made sense was this idea of planting seeds for memories. Showing people how food can be used as a catalyst to bring people together and start memories.”

And that’s the idea behind MP Taverna. A comfortable, casual place where families are introduced to Greek flavors at a slower pace. The food is straightforward—meatballs, bulghar salad, hanger steak, roasted lemon chicken—with a focus on traditional flavors. Psilakis hopes Greek becomes the answer to the proverbial “What do you feel like having tonight?” Soon, it won’t be so Greek to you. 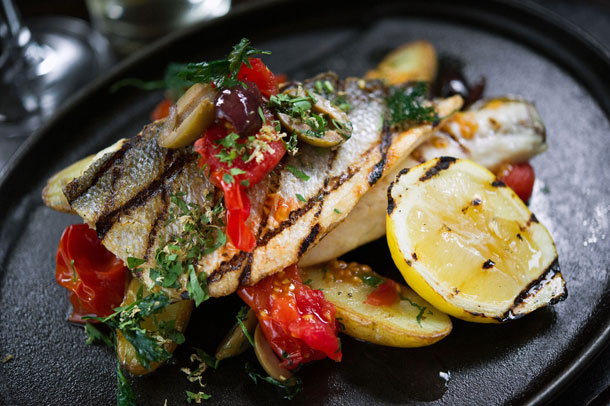 Method:
Pre-heat a grill to med-high. Paint fish with EVOO season with salt and pepper, and place on the grill. Char on each side for approx 8 min.

For warm salad, in a large heavy-bottomed pan add 2 Tb. EVOO and heat through. Brown garlic and potatoes. Then, add tomatoes, olives, onion rings, dry oregano, and feta cheese. Transfer to a serving platter and place the fish on top of the warm salad. Squeeze fresh lemon juice on top, then drizzle with EVOO, and sprinkle with fresh herbs.