One night in 1927, the heart of Prohibition, a raging storm drove the schooner William T. Bell aground at Oak Neck, the sandy stretch of land where Bayville meets Centre Island. Nearby residents soon discovered it wasn’t laden with lumber as it was supposed to be, but with bootleg liquor from Canada. The crew was rescued but quickly disappeared. So did most of the cargo.

“For some reason, they didn’t bother to report it to the Coast Guard for two days,” said David Rapelje, director of The Bayville Historical Museum. When officials finally arrived—after residents hauled away barrels of whiskey, Scotch and malt extract—they decided to tug the ship out to sea and dynamite it. But that didn’t entirely do the job, Rapelje said. “The hull remained and they wound up cutting it apart.”

Long Island is rife with colorful stories about bootleggers, rumrunning vessels, speakeasies and stills during Prohibition from 1920 to 1933. The coves and crannies of Long Island’s shores and its proximity to New York City, home to millions of thirsty folk, made it a hotbed of illegal importing from Canada, the Caribbean and even Europe. Commonly, large ships anchored in international waters (at first three miles offshore, later changed to 12 miles) and smaller boats owned by local fishermen or farmers would gather the goods and deliver them to waiting trucks, some of them owned by gangsters like Dutch Schultz who had an office in Patchogue. 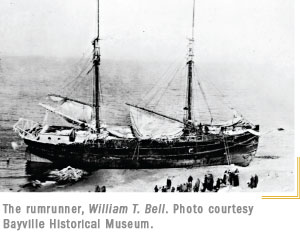 At the Greenport waterfront restaurant then owned by Frank J. Claudio, some of the boat operators docked under his restaurant, which then rested on stilts, and passed their loads up through three trap doors. Two still exist, one behind the bar and one in the kitchen, according to Bill Claudio, Jr., Frank’s great-grandson and the current proprietor of Claudio’s. Many bottles were loaded on trucks headed for New York City. “A lot of gangsters were out here, too. Bugsy Siegal would come out here to negotiate and send trucks,” Claudio said. Nearly everyone was involved in bootlegging, “even the policemen when they were off duty, they were doing it too.” Some of the inventory stayed at Claudio’s, which had a fine French restaurant downstairs and a speakeasy upstairs with a peephole and probably a secret password. Downstairs, diners could sip glasses of “water,” which quickly disappeared via a hidden dumbwaiter (also still there) if there was a raid. But there is no record of anyone getting caught, Claudio said. “Payoffs were made and if ever there was a raid on Claudio’s, we would get notice.”

The speakeasy inside Riverhead’s J.J. Sullivan Hotel may have never had to fear a raid because it was frequented by members of Tammany Hall, said Ed Tuccio, present owner of the hotel and of Tweeds Restaurant & Buffalo Bar, named after “Boss” Tweed. Nevertheless, the speakeasy was well hidden. During Prohibition a wall was built, where there is now a short glass partition. The small area was supposedly a barbershop, but most people passed right through to the bar (which also boasts the trophy head of the last bison Teddy Roosevelt hunted in the Dakota Badlands). A trap door on the second floor, which still exists, was used to pass liquor from the bakery next door (which either hid the booze or made it, since liquor and bread require similar ingredients), but the dumbwaiter that brought it downstairs has been removed.

Tuccio and a bar patron, Duane Lewin of Aquebogue, recounted stories about other operations, including a Jamesport man who hid bottles in his stable’s cellar, reachable only by a trap door in one of the stalls, and another man who surrounded his still with oyster and scallop shells to disguise the sweet grain smell.

Actually, that distinctive sweet odor led to the 1927 discovery in Woodbury of the east’s largest still, said John Hammond, the Town of Oyster Bay historian. A Nassau County patrolman riding down Woodbury Road noticed the smell and traced it to a barn, which burned down as police started to remove the distilling paraphernalia.

Fire figured in another bootlegging discovery, this one in Bridgehampton in 1931, when a liquor truck overturned in a ditch on Montauk Road. The driver tragically burned to death. Before the police arrived, nearly 100 people had gathered and (as with the William T. Bell) “confiscated a considerable portion of the wares with which the truck was loaded,” according to a New York Times article unearthed by Ned Smith, the Suffolk County Historical Society’s librarian. 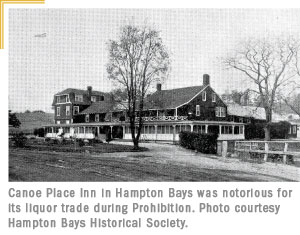 While raiding a speakeasy on West Patchogue’s Summit Avenue in 1930, Suffolk County officers uncovered another distillery, this one inside a chicken coop where a 25-gallon copper still was going full blast, the Suffolk County News reported. Farther east, Canoe Place Inn in Hampton Bays housed a notorious speakeasy, said Brenda Sinclair Berntson, Hampton Bays Historical Society president, who has led a drive to restore the inn. “According to my dad, my uncle was a night guard at the inn and he said they had guard dogs on the property at night during Prohibition to alert them to visitors.” The nearby Scotch Mist Inn, which burned down in the 1960s, was said to have “tunnels underneath it for the purpose of evading and hiding liquor.” The tunnels are supposedly still there, she said. “Needless to say I can’t verify this.”

Dan Sheehan, who leads tours for the Northport Historical Society, heard similar rumors about his hometown and tried to verify them. “I heard you could enter them through a large drainage pipe at the bottom of the village so I got in my kayak and went in to see what would happen. It became apparent to me that there was no way in hell to bring booze in that way. My feeling is that everything was kind of loose and no one needed to use a tunnel.” Among Northport’s several speakeasies, he said, was one in a garage, now bricked up, down an alley off Main Street between the Ship’s Inn and Lics Ice Cream. Another was in the Northport House hotel, which stood at Main Street and Bayview Avenue until the 1960s, now the site of a park. “From what I understand it was an open secret that you could get a drink in there. A lot of people were looking the other way.”

Even where there was strong support for Prohibition, as was the case in Port Jefferson (bolstered by local Ku Klux Klan approval), rumrunners landed on the shores and local establishments like Barker’s Hotel, the Evergreen, the American House and Bennett’s Restaurant served liquor, according to Port Jefferson Village Historian Ken Brady.

The baymen of the South Shore did their part, too, said Nancy Solomon, executive director of Long Island Traditions and author of On the Bay, a book about bay houses in the Town of Hempstead. During the roaring ‘20s, they were often used to hide contraband. Hotels and dance halls also grew up in the marshlands, enjoying the same protection of being on remote islands. One was Charlie Johnson’s hotel on Meadow Island (south of Merrick), where couples, families and party groups “enjoyed dancing, liquor and the scenic vistas.”

One memory Solomon recounts is that of Jack Combs, a bayman who shared a house with his partner “One Arm Charlie” in the Haunts Creek area (north of Jones Beach). They stored the cash they made from smuggling booze in a cigar box under a cot, where the bills were soaked during an extra-high tide. Combs purchased thumbtacks and the two men tacked the money to the walls. Just as they finished, a federal marshal kicked the door open with his gun drawn and gaped at the hanging bills and shouted, “You are under arrest!”

“What for?” Combs asked.

“Possession of alcoholic beverages,” the marshal answered. But they only had money, Combs protested. “Ain’t against the law to have money.”

“You have a point,” admitted the officer. And he left.