Ba-na-na-na-nuh. Yeah. You know the riff. A blue-collar blues/rock rebel with rough vocals and a growlin’ slide, George Thorogood has infiltrated ears and bar jukeboxes with “Bad To The Bone,” “One Bourbon, One Scotch, One Beer” and “Who Do You Love?” People drink with his music. People cry with his music. Sometimes even both.

He continues to tour and while most within his age bracket are obtaining hip replacements and napping through reruns of In The Heat of the Night, he’s still a ba-ba-badass. A happy ba-ba-badass.

Niko Krommydas: How are you?
George Thorogood: BAD. 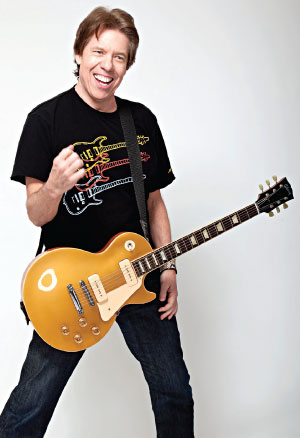 NK: Do you ever get annoyed when people bring up “Bad To The Bone”? I’m sure it happens a lot.
GT: Ask John Steinbeck if he’s ever bothered when people mention The Grapes of Wrath.

NK: What makes a good blues song?
GT: You gotta be blue. That’s obvious, right? Paul McCartney’s “Yesterday” is the greatest blues song ever written. I mean, the man is saddened by the death of his mother. What could be more blue than that? That’s why everybody likes it. The one emotion, Niko, that everyone experiences from their birth, to the day they die, is pain. Everyone can relate to pain. Not everyone lives a happy life. When you’re born, they smack you right on the butt. That’s pain.

NK: You’re born into something that doesn’t make much sense.
GT: Exactly. That’s why people like rock music, because they want to get out of that pain. I don’t play blues anymore, I play rock music. It lifts spirits. The day is long gone for me where my baby left me, and I ain’t got no job, and my car broke down, and police wanna kill me. Life is good. I’m too happy to play the blues right now.

NK: We just had an election and political issues have often influenced rock. How is the country doing?
GT: Change is what it’s all about. We need to move forward. I’ll reiterate, again, why I want to play as much progressive music as I can. There was blues, then electric blues, then rock n’ roll and then rock. It was an evolution of something that keeps you moving. When the politicians run and say, ‘Hey we wanna keep America the same as it always was,” you have to ask why. You don’t want to do that, because it was terrible. Women couldn’t get good money and jobs, black people couldn’t vote and children were treated very badly in my generation. You need change and you have to keep moving forward to do that. People talk about the economy, but what about the ecology? We need to take care of that first.

NK: You still have an active tour schedule. What’s changed since you first started touring?
GT: Everything. Transportation is better. The venues are better. We don’t have to haul our own equipment. We have time to rest now. Things were pretty rough in the 70s and 80s.

NK: Can you still live in a van and succeed in 2013?
GT: Let me put it to you this way: If you can play a musical instrument, you won’t go hungry. If you can play real good, you’ll eat real good.

George Thorogood and the Destroyers Live
March 17, The Paramount, Huntington
As if you needed another reason to drink on St. Patty’s Day.