The deep red walls of Nelson DeMille’s writing room are left over from the previous tenant and he hasn’t gotten around to changing the color, even though he hates it. Neither has he bothered to replace a couple of adjustable leather chairs that are stuck in a low position. After sitting in one, he mumbles a reminder to himself.

DeMille has rented this third-floor space with its serene view of the Garden City Library’s green lawn for at least five years. It’s where he does all his writing these days. “If I’m here, I’m not doing anything else. There’s only one thing to do here and that’s write.”

The multi-roomed office below it, which he’s had for many years and shares with two assistants, is for the more mundane tasks of a best-selling writer, like dealing with foreign rights, e-book royalties, movie rights, advertising and promotion. “You’ve got to treat it as a business,” says the author of 17 novels (plus 10 early true-crime paperbacks that he doesn’t count), starting with By the Rivers of Babylon in 1978 and including The Gold Coast, The General’s Daughter, Night Fall, The Gate House, The Lion and his newest, The Panther, his sixth book starring NYPD Detective John Corey.

The small office building is in the heart of the village shopping area, steps from the Long Island Railroad tracks and just a few blocks from his home, a Tudor Revival mansion he designed for himself, his wife Sandy and, since 2006, their son James. DeMille has two other children, Alexander, 32, and Lauren, 34, with a previous wife. Born in Jamaica, Queens he grew up in Elmont, graduated from Hofstra and has lived in Garden City since 1975. Along with his friend Susan Isaacs, who lives in Sands Point (and is also part of a group of top mystery writers who meet regularly at Michael’s restaurant in Manhattan), he is probably the most famous non-East End novelist residing on Long Island.

“I read books, I go to good restaurants,” he says about the few hours he takes off while working on a new novel. He and Sandy often join friends, most of them not writers, at local restaurants. He sees his son off to school in the mornings and they go on weekend outings. But it’s only between books that he gets to relax, travel and otherwise “try to catch up on my life.” He’s taken as much as three months off. “But it’s also a trap, a pitfall. You’ve got to be careful what you do with your downtime. If you’re not writing, you should be doing research or at least thinking about your next book.”

The Panther rose to number one on The New York Times and Publishers Weekly bestseller lists and that made him change his mind about what to write next. At first, he was not going to center on John Corey. Though revisiting the same character is a crowd pleaser, it’s more difficult: “You have to find a new story every time. But it has to fit with the character’s backstory and it has to fit with the job you’ve created for him.” However, with the success of The Panther, which also generated movie interest, he’s invented a new adventure for Corey and started writing. “He’s going to be on a Hostage Rescue Team, a small, elite unit within the FBI, either in Afghanistan or Pakistan.” The new book is scheduled for publication in spring 2014.

For the long term, he’s considering options. He could write a literary novel or try his hand at a memoir, something else he’s thought about. Or he could just re-up with his publisher of 30 years for more thrillers.

“The easy thing to do is to sign another contract. That’s my comfort zone.” But if he ever retires from that, he muses, leaning back in his low-slung office chair, his eyes getting a bit of a faraway look, “I could just write a book, without discussing it with anyone. I could give it to an agent or an attorney and say, go sell this. I could write it on my own terms.” 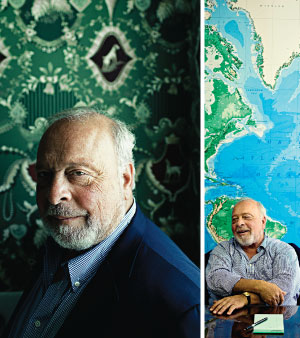 To write, the important accoutrements in his red writing room—apt for a creator of blood-stained thrillers—are the bouquet of pencils in a cup on his desk, a pencil sharpener, a coffee maker in an alcove (12 to 13 cups a day, all caffeine, “Otherwise, why drink it?”), a large ashtray for his cigarettes and neatly-shelved reference volumes in a bookcase behind his desk.

The World’s Great Religions. The Muslim Almanac. Yemen. The Lonely Planet travel guide to Oman, UAE and Arabian Peninsula. Gray’s Anatomy. These are some of the books DeMille consulted to help create The Panther. The novel sends Corey—first introduced in the Long Island-based Plum Island and now an agent in the Manhattan office of the Anti-Terrorist Task Force—on a dangerous assignment in Yemen, one of the most chaotic and violence-prone countries in the Middle East.

What you won’t find in the room is a computer. DeMille doesn’t use one. He writes his books with pencil on white legal pads. The pads used to be yellow, but now, at age 69, he finds the white ones easier to read in evening light. “It stands out better. Toward the end of a book, the last two months, you know that time is running out, so you work late into the night. I work till about 11 and Saturdays and Sundays. It’s like a term paper. You try to pace it, but you can’t. And you’re never ahead, you’re always behind. And you’re always behind because you don’t know when a book is going to end.”

His assistants, Dianne Francis and Patricia Chichester, type his words into computers. They also print any research he wants from the internet—including maps and what turned out to be a useful overhead view of the American Embassy in Yemen, which figures in his Panther plot. “You couldn’t do this years ago,” he confides. They even print his emails, which he likes to read, and they type and send any replies. “I listen to my fans. It’s like market research. The fan mail now comes as hundreds and hundreds of emails through my website and you learn something from them.”

He has a sophisticated website and three of his short stories have been turned into low-cost Kindle Singles, a form he thinks has a viable future. He’s grateful that sales of his older books have increased because they’ve become low-cost e-books. Of course, he’s never read an e-book—DeMille is computer savvy without being an actual user. Nevertheless, his characters occasionally step up to a keyboard.

Corey, the wisecracking hero of The Panther, gets on the internet—on his own—to research the dangerous Al Qaeda leader that Corey and his wife, FBI agent Kate Mayfield, are sent to find and capture or kill before he kills them. Their quarry is known as al-Numair, or The Panther, but Corey learns from Wikipedia that his real name is Bulus ibn al-Darwish. “No wonder he changed it,” says Corey, the book’s narrator. He also learns The Panther was born in Perth Amboy, New Jersey, of immigrant parents, and graduated from Columbia University “with a degree in economics—making him an Ivy League terrorist. He should have gone to Wall Street—same work, better pay.”

DeMille says he based the character on the real-life American-born Al Qaeda leader Anwar al-Awlaki who was killed by US counter-terrorism forces in Yemen. Most of the plot points and character details in his book, however, were his creation, as was the feline nickname.

Some observers think DeMille has patterned tough-guy Corey, who doesn’t like rules and isn’t afraid to talk back to a boss or an enemy, at least partly on himself. The similarities are there, he admits, “Maybe the sarcasm, certainly his worldview. Obviously, we have different jobs. But as far as personality, there is a lot of John Corey in me.” They both drink Dewar’s and soda, he adds.

Besides using books and the internet to research The Panther, DeMille interviewed people who have worked in counter-terrorism and who have been to Yemen, including retired NYPD Detective Kenny Hieb, whom he thanks in the book’s acknowledgments. He also mentions a young man named Matt Longo, a friend of his older son who visited Yemen to learn Arabic.

But visit the place himself? Surprisingly—especially considering the details in his novel—DeMille didn’t travel to Yemen. “It got dangerous. There have always been kidnappings and other problems. But it became particularly dangerous about three years ago. There’s a minor civil war still going on. They’re shooting at each other. Al Qaeda has actually taken a few of the towns, and then you have separatist groups and the tribal areas that have always wanted independence from the central government. It’s a lawless society.”

He seriously considered going there and consulted a friend in the Department of Defense. “They said if I went, I needed at least two bodyguards. Professional, trained body guards, people who do this for a living.” Still, he adds—this must have been a hard decision and even harder for a tough guy to concede—“If I was younger, I would have gone… You reach a certain age and third world travel becomes a little more of a challenge. Not physically, but I felt if something went wrong there, it wasn’t just me. I have a wife and a six-year-old. People are getting killed there.” He’s never been to the Middle East at all, he adds, and Yemen was never on his wish list, anyway.

“I want to go to Israel, that’s where I want to go. And to Egypt.” He had put off going with his first wife, who is Jewish, and his second, a born-again Christian, though both wanted to visit. This time, he’s determined to go with Sandy. “We will go. Eventually.”

Nelson DeMille, in his rare non-working moments, likes to spend time with family and friends, often close to his Garden City home or on the East End.

Restaurants (the category he kept returning to): Giulio Cesare in Westbury; “any Tom Schaudel restaurant” like CoolFish in Syosset; Stresa in Manhasset; Rialto in Carle Place; Walk Street in Garden City for holidays including Christmas Eve; La Marmite in Williston Park for Valentine’s Day; Ruth’s Chris in Garden City for steak.

Hotels: The Garden City Hotel for its restaurant-bar Rein and for recommending to visitors; the American Hotel in Sag Harbor for its restaurant and a place to stay; and Gurney’s Inn in Montauk for the spa, especially “in winter when it’s not crowded.”

Private dinner: Oheka Castle, where he and his wife Sandy held a wedding dinner for 20 guests in the Charlie Chaplin Room.

Private clubs: Seawanhaka Corinthian Yacht Club on Centre Island, where he and Sandy hosted a big wedding reception, celebrate July 4th and send their son for sailing lessons; the Atlantic Beach Club, where they go to the beach; and the Cherry Valley Club in Garden City, where they play tennis.

Places to take his 6-year-old son: The Long Island Aquarium in Riverhead and he Montauk Point Lighthouse area: “He loves it there.”

Entertainment: All the North Fork wineries” and Belmont Park racetrack in Elmont, near where he grew up: “They got a lot of my money.”