Baltimore likes to paint itself as the punkish, disrespected, smart-ass little brother with plenty to say, but too much attitude to come right out and say it. A full two decades after my undergraduate years in this historic port city, I took my family on a weekend getaway to “Charm City” and it did not take long to see past Baltimore’s bravado and rediscover a city that’s by turns blissfully artistic, cynically intellectual and raggedly independent.

Baltimore’s paradoxical nature stems from its geography and its complex, conflicted history. Essentially defining the Mason-Dixon Line, Baltimore has a wealth of Southern hospitality and a firmly adopted sense of Yankee culture and sophistication. During the Civil War, Lincoln sent troops into Baltimore to quell secessionist riots, yet the city was also home to abolitionist pioneer Frederick Douglass and a main stop on the Underground Railroad. It’s a city that accepts and proudly flaunts its profound dualism.

Harborplace remains a monument to Baltimore’s long resurgence. In the heart of the harbor, our commodious suite at the funky Pier 5 Hotel offered heartwarming views of the cityscape to the northwest and across the Inner Harbor to the south. Late on our first night, after putting the family to bed, I stepped out and walked in solitude along the cobblestone piers. I quickly fell into a light meditation as the harbor lulled against the bulkhead and my reflection seemed to rise up in spirit, shimmering off the rippling harbor in the moonlight.

The sacred hipster part of our Baltimore “trip” started at the Papermoon Diner. The cramped space is bedazzled in a mind-blowing array of cool kitsch—Legos, Pez dispensers, dolls, superheroes, Disney characters and boundless vintage schlock all swirl and swarm the walls and ceilings in one massive pop culture hallucination. The menu puts an equally quirky twist on good ol’ comfort food with perfectly textured shrimp with grits and a lights-out turkey, ham and havarti sandwich on sunflower bread with honey mustard (the “Jack & Jill”) and of course, a core part of everyone’s food pyramid—the Kaptain Krunch milkshake.

Baltimore is not a perfectly gridded city, which only adds to its twisting, turning, brick-laden charm. But in terms of logistics and relative proximity, it is a dream. Within three blocks of one another in Harborplace, my wife and kids climbed through the three-story maze at the Port Discovery Children’s Museum, walked the oceanic spiral staircase at the National Aquarium and rocked a 3,980,000 score on the original 1953 Williams Manufacturing Co. Nine Sisters pinball game at the National Pinball Museum. 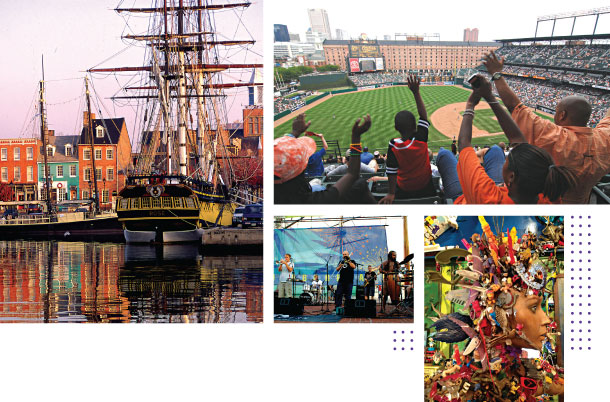 Across the harbor to the south is Federal Hill. Here General Samuel Smith, who was instrumental in winning the Battle of Long Island under George Washington during the American Revolution, used his diplomacy and savoir faire to build mercantile relations with the indigenous Piscataway Tribe and fought to repel the British at the iconic Battle of Fort McHenry in 1814.

Rich history aside, Federal Hill is also home to the American Visionary Art Museum, a brilliantly conceived space (three spaces really) full of works by lesser known artists. As I lost myself in the current thematic installation, The Art of Storytelling, I couldn’t help but think of my own story, and the major part Baltimore played in it.

If the Inner Harbor is the heart of Baltimore, then Fell’s Point is her star-spangled soul. Once a launching pad for privateers who tormented the British Royal Navy with stealth and guile, Fell’s Point still has that mysterious, maritime vibe thanks in no small part to the endless array of vintage watering holes tucked into its tight alleyways and side streets. But never mind the voodoo of Bertha’s, the sublime sweat of the Cat’s Eye Pub or the longshoreman’s shithole grit of The Horse You Came In On. They’re all wonderful places, all playing host to the ghosts. The ghosts of the pirates who cursed, swaggered and sailed from these ports. The ghosts of the slaves who sought refuge on their way to freedom. The ghosts of the founding fathers who charted the course of a fledgling nation. The ghost of Edgar Allan Poe, zigzag staggering from lamppost to lamppost, conjuring glorious horror until he passed out face first in his own filth and later died. And the ghosts of college kids like me, tasting freedom for the first time and gloriously punching holes in the balmy spring night.

Speaking of spring, baseball is a big part of Baltimore’s story and the christening of Oriole Park at Camden Yards in 1992 helped launch its renaissance. As did Cal Ripken, whose legendary status as baseball’s “Iron Man” added tremendous credibility to the city’s aura of resilience and underlying toughness. But Baltimore’s relationship with our national pastime runs deeper—all the way back to the Sultan of Swat whose life and achievements are archived at the Babe Ruth Birthplace and Museum. This very small and very enjoyable destination is only blocks from Westminster Hall, where I finally caught up with Poe at his grave (yes, of course you can hear the beating of his hideous heart).

Driving north on Charles Street, Baltimore quickly reveals its intellectual side as the cozy, pastel row houses of Charles Village give way to the gravitas of The Johns Hopkins University, whose south side plays host to the Baltimore Museum of Art. A vastly underrated collection of Degas and Rodin sculptures resides at BMA, as does Gertrude’s, a five-star bistro owned by celebrity chef John Shields. I purposely held out for Mr. Shields’ crab cakes at brunch. Paired with a perfect Bloody Mary or two, the entire experience left me feeling just exactly…perfect.

Maybe that’s why I wandered alone into the BMA’s sculpture garden as the family piled into the Jeep, ready to truck it back home on I-95. Strolling quietly past the smooth forms, the jagged figures, the soft abstracts, as I’d done so many times before, I looked north through the mellow fog toward the idyllic Hopkins campus. I thought to go further, to walk the hallowed grounds of my past. But my family—my future—was waiting. I looked back one last time and in the mist, I saw one last ghost: An aspiring writer with his head on fire, with plenty to say but too much attitude to come right out and say it.

And so the story goes…