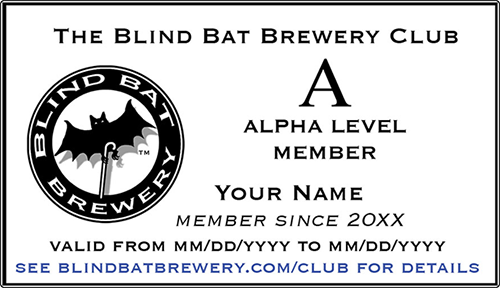 The club, which features five levels, will distribute membership benefits when Blind Bat Brewery opens a new facility and, subsequently, switches to full-time operation. Dlugokencky, who currently brews in a shed behind his residence, is currently scouting buildings in Farmingdale and expects to announce a location “sometime in March.” The new brewery will open “by the fourth quarter of 2013.”

“I had considered a Kickstarter or Indiegogo campaign, but neither would allow me to offer contributors what I think they would be most interested in, which is beer,” says Dlugokencky, who has decided on a semi-custom 10-barrel brewhouse. “I was inspired by both the CSA, or Community Supported Agriculture, model and what a number of Long Island wineries are doing with wine clubs.”