Supporting their seventh record, Koi No Yokan (loosely translates in Japanese to love at first sight), the Deftones bring their difficult to categorize, but primarily aggressive style of rock to Huntington’s The Paramount. Drummer Abe Cunningham took some time to speak with the Pulse about the tour, making the album and why you might never see an acoustic record from them.

LIP: How are you and where are you?
AC: I’m doing really good. We were over in Europe for, I guess, nine shows. We’ll be up in Toronto and then in Montreal and then back down to the States. The tour’s going great, the reception has been really, really good.

LIP: How does the reception overseas compare to the US?
AC: It’s kind of funny. We’ve been going over [to Europe] the better part of 20 years and initially there was definitely a difference. I think these days, no matter where you go, you find people are the same no matter where you’re at: people want to get down and have a blast. The crowds are very similar now, but European crowds used to be way more of an up-and-down jumping sort of thing, as apposed to American crowds who are more circular, if you will. It’s kind of funny, now they’re sort of the same—I don’t mean that in a bad way, it’s just people are looking to have a good time. 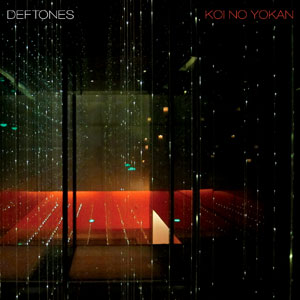 LIP: Do you think the Internet has helped with that?
AC: Definitely, the rate of information and things out there that people can snatch in a second and get turned on to. It’s amazing man. It’s a different world; I’m from a different time [laughs]. I’m all about it though you know.

LIP: It sounds like Koi No Yokan came together smoother than previous records, very much like Diamond Eyes (2003), because it was a more collaborative effort.
AC: Yeah. We’re very lucky to have the last two opportunities [records] to turn out the way they have after many years of doing things such the wrong way. And hey, you live through these things man; it’s part of living life. God man, the last two records have been such a breeze to make, just a really enjoyable, light experience. Whereas the records in the middle of our career, starting with White Pony (2000), is when things started to get crazy. It’s pretty well known that the next two after that were, the self titled (Deftones, 2003) and then Saturday Night Wrist (2006), just really some of the worst times I’ve lived in my life. I mean, of course great things happened, children were born and all kinds of things like that, but as a band it was really tough. Communication was nil, of course many, many other factors—rock’n’roll shit.

LIP: You guys have spoken quite extensively about Chi (bassist injured in a car accident in 2008 that left him in a coma). Is there new information you want to get out there?
AC: The whole Chi thing; we’re still trying to figure out how to deal with it to this day. He’s my brother, he’s our brother, and he’s not here with us. We all did these things together and created this thing together. I think people still need to be aware of his situation and he’s got a lot of love from all over the world, from people that he touched. That’s a good place to be. As far as a band from, that point on, we just…you know, we’ve been friends for 25 years…we’ve been a band for 25 years, so more than half of our lives. We learned to appreciate what we have: our health and our band. It’s something we all created and we learned to respect it and really be thankful to be upright walking around while our brother is not. That being said, these last few records, we just said fuck it, let’s just get down to it man. We don’t want to look back, we’ve found a new way of doing things and it feels really good. We’re just on a new plane man, a new way of doing things—a positive plane.

LIP: The new record starts out with Swerve City, continuing the trend of hard-hitting, riffy openers. Is that something you guys plan on?
AC: I don’t think so. When we make a record we pretty much write enough songs to complete the album. We might have a couple of extra things left over, but over the years we’ve done a lot of the editing and when we write, if it’s not sticking we toss it away. So we’ve sort of edit as we go and then when it comes to figuring out the sequence we all get together and everyone has their equal say, their dream sequence and we write it down and if there are similarities, that’s what sticks for the album sequence. I don’t think we’ve ever really tried….[to start the album aggressively]. I don’t know, that’s interesting, I’ve never really thought about it like that. Of course you want to have a little something to grab people but who’s to say it couldn’t be Rosemary or a Digital Bath, that is a little more mellow?

LIP: Think the worlds ready for a more stripped down, acoustic record?
AC: I don’t know about acoustic. I have no problem doing things like that. I’ll tell you right now that Stephen [carpenter, lead guitarist] is so anti…he’s so funny that way, he’ll say “Fuck that, these songs are meant to rock.” But you know we’ve done some acoustic things before and the songs sound great.

LIP: How do you explain your productivity now, 25 years later, seven records when some of the other bands you came up with haven’t been as productive?
AC: I don’t know, that’s up to them. We’ve been a road band. We’ve been a band for 25 years but far as having albums out and having a record deal and all of that it’s been about 17 or 18 years, so you could say, well why have you guys only put out seven records in 17 or 18 years. We’re a touring band. Generally we’ve always done 2 to 2 1/2 years in between records. We’ve done touring in between and that’s something we relied on to spread the word and earn a living. We’re also living life in those periods too, I think a lot of the bands that had a lot of popularity at that time were pretty keen at popping a record out as quick as they could each time to keep the momentum. Some bands would pop a record out every year, because they were doing so well. We kind of go by our gut, for better or worse, but we are still here today. And we’re having a fucking blast.

LIP: You guys started touring in your early-mid 20s. How has touring changed now that you guys are a little older?
AC: It’s been pretty much the same. You can do anything you want as long as it’s property thought out. Now we have about a 1 1/2 to 2 years to plan each tour so that it’s well though out and there are breaks involved. We’re grown up now and the band is everything; we’re all family and all friends and we love each other man. We back each other. We try to do a couple of months on and then home for a couple of weeks, if possible, to keep sanity and to keep everyone happy, which is the most important thing. It’s a different world these days. Around the world people are hurting for money. You have everyone touring due to lack of record sales, I mean U2 and Metallica in jets up above a thousands bands in vans on the ground, and then bands like us in between with a couple of busses and semis going down the road. We’re all in your town.

LIP: If you had to pick a place in the US, where do you love to play?
AC: East coast—the Northeast [laughs]. It’s funny because we’re lucky as hell, we busted our asses for years and there is definitely some luck involved. Chino and I were 15 when we started this band, we were sophomores in high school. The goal was obviously to play our town as much as we could, then it became, lets play the next town over. I mean it sounds simple, but that’s where we’re at today. My whole thing is I’m down to play anywhere at anytime, and always looking to play the next town over. We’re from California and it was always a huge thing [to play the East coast]. I mean so many bands that we grew up loving, and still love to this day, are from the East coast and the New York area so it’s a huge thing. I remember the first time playing the Roxy, or the clubs around town. The first time we played the fucking Garden was unbelievable. It was a major milestone.