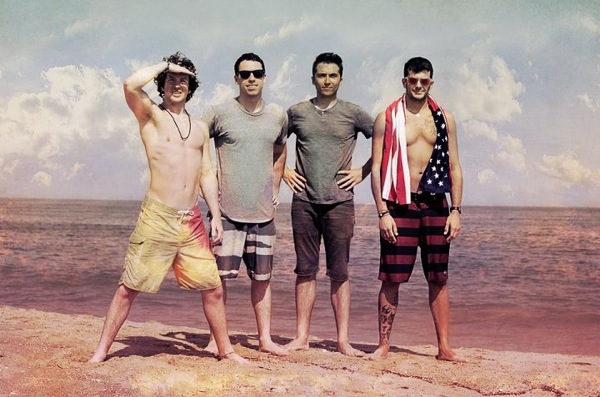 From “Lola” by Diamond Youth

It may seem odd that the lead singer of alt-rock band Diamond Youth recently covered a Frank Ocean song but the twenty-something rockers also listen to R&B, including Prince, Ace of Base and even Justin Timberlake. The Baltimore and Chicago-based quartet recently released its latest EP called Orange, featuring a mix of melodic and rockin’ songs like the catchy, energetic title track, for which the band recently released an MTV Buzzworthy video.

Pulse: How do you describe your sound (aside from alt-pop-rock)?

Justin: The overall aesthetic is alternative/indie-rock. Our influences include Nirvana, the Beatles, Foo Fighters and the Beach Boys. If you wanna get crazy, you could add Prince.

P: Do you do most of the writing- lyrically and musically- for the band? What are you inspired by?

J: We actually write the songs pretty equally. Any of us could text a guitar riff, email a garage band demo or video chat with a vocal melody at any time. We’re all constantly writing music in general. Once we get together in the same city, we jam on the ideas that are most exciting and see if there are any that shine through. Most of the time, this is fueled by two gallons of coffee.

P: Are you still a DIY-type band that creates all of your own art work, merchandise, web sites and videos? Do you all have other jobs?

J: Absolutely! We just love creating any kind of art whether that’s a song or the music video for that song. I like the idea of being able to collaborate with my friends on so many different levels… In terms of jobs, yes, we all work in various ways to pay the bills. Sometimes that’s graphic design, sometimes it’s joining a Devil Sticks street performance group.

P: What’s been your most exciting live experience so far, and why?

J: We recently did a few shows with Braid in the Midwest and it was definitely surreal. It was exciting because i grew up listening to them—and now I can say we both slobbered onto the same microphone.

P: Which well-known bands can you see Diamond Youth opening for in the future? Who would you most like to tour with?

J: My favorite venue so far in NY is Saint Vitus Bar. We just played there yesterday with PJ Bond and Turnover on our tour and it ruled. The venue is like seeing into the mind of Alice Cooper… The sound was great and the whisky was better.

P: Which song do you most like to play live, and why?

J: My favorite song to play live right now is “Orange.” I just love the speed and energy of the song. It always gets some weirdo dude in the crowd to start flailing his arms. I love it.