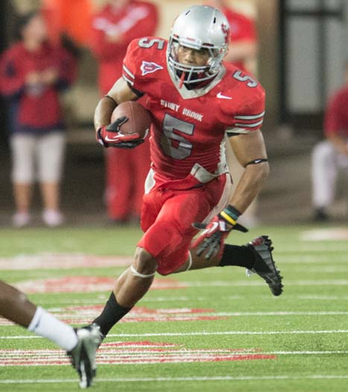 Now Maysonet, who started his college career at Hofstra University before they dropped their football program, will try and become the first player from Stony Brook drafted by an NFL team.

“I know I can play in the NFL and have a good career,” Maysonet told ESPN New York. “I have confidence in my ability and my work ethic.”

It’s not uncommon for FCS players to make the jump to the NFL level, but it’s not easy. He is currently projected as a late round pick, even after starring on the FCS level with more than 4,700 yards in three seasons.

At the combine in Indianapolis, held at Lucas Oil Stadium, Maysonet performed in the three-cone (7.21 seconds), and the short shuttle (4.43), amidst a number of team interviews, drug tests and psychological exams.

He’ll find out his fate on April 27 during the later rounds of the NFL Draft.