If Michael Krasowitz’s work brings him a fraction of the out-of-body thrill his spectators experience, he’s in for quite a ride. The prolific Huntington Station-based painter, who is showing at Art on A Gallery in the East Village through mid-April, is on a journey that iconoclasts like Picasso and Chagall initiated a full century ahead of him. “I am definitely inspired by both Picasso and Chagall for sure,” said Krasowitz. “I think Picasso’s process began the evolution in art to see behind the surface of experience. I believe Chagall was seeking a similar expression.” In channeling the masters, Krasowitz’s efforts are rooted in sound technique, voluptuous forms and a kaleidoscopic use of primary color. His intention is to poke holes in our everyday understanding of the human experience and to contemplate the spiritual experience. 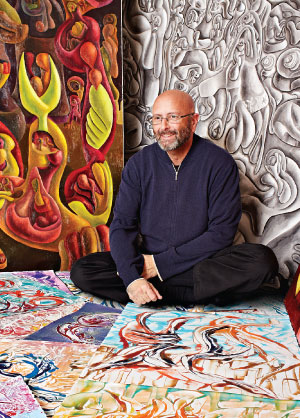 If all artists are clever thieves, count Krasowitz among them. He filters many ideas and influences through his process before yielding wildly original results. The overall aesthetic is something of a visual siren song, a psychedelic offer we can’t refuse. Perhaps we’re drawn in because the spiritual journey that Krasowitz is trying to understand (and render) is common to us all.

Works like Sedona and A Knight at the Opera might be considered Krasowitz’s signature pieces. They’re saturated representations of an exaggerated reality filled with richly colored and textured figures. Their distorted bodies and heads fill the canvas with a dripping sense of strange transcendence. A Summer Day fuses intention and function by subconsciously reimagining the mise-en-scene of the Sgt. Pepper’s album cover, inviting Mr. Kite and his colleagues along for the fun. Looking at Krasowitz’s work, the rambling sheets of William Burroughs’ uneasy literary hallucinations, the cinematic surrealism of Buñuel and even the echoed depths of Roger Waters and The Wall are all felt. “My work deals with the deconstruction of memory, how the mind organizes feelings and memories. The image becomes a single moment, yet it is constructed over a long period of time. Forms are organic; they flow freely in the space of the piece and find their space as a plant finds root or space in the sky.”

While Krasowitz is certainly an oil and canvas painter in the classic sense, he’s come to fully embrace technology like so many other contemporary artists have. He’s in the midst of a daily blog-like exhibition in which he cranks out a print every day, posts it on his website and circulates it via social media—making Krasowitz something of an art-centric Owsley Stanley of the digital age, just without the paper. “One of the great advantages to using contemporary technology is the ability to experiment rapidly and create many iterations of an idea. I am able to work through many ideas and develop a style of image-making in an intuitive and spontaneous way.”
Krasowitz also acknowledges one of the positive shifts the internet is forcing on the art world and the world at large: It’s leveling the playing field. “It also goes to the idea of art as a commodity. One-of-a-kinds are more valuable than multiples, larger pieces more expensive than smaller ones, but in the virtual world these things break down and become more democratized.” 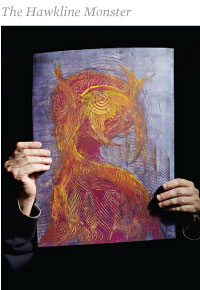 At his highest frequency, Krasowitz seems to echo the philosophies of authors Ken Wilber, Wayne Dyer and Eckhart Tolle. His ultimate goal is to obliterate goals altogether. He enjoys the bliss of pure creativity by foregoing ownership of the process to become a conduit of creative energy. “I think the most challenging part is to trust that something will happen as I work, trusting myself as well as the mystical manifestation of the work,” Krasowitz emphasizes. “What we call consciousness is limited. Our human experience is much more complex and diverse. I think of making art as an exploration of this unseen space. This has taught me humility. The more I try to control the outcome the more contrived the results. I’m just trying to be a facilitator of this experience.”

Michael Krasowitz’s paintings are on display as part of the Faces in The Crowd exhibit at Art on A Gallery, New York City. See his daily mono-prints at thedailykrasowitz.blogspot.com.