Do you know how to watch a movie? This probably sounds like a silly question because most of us have been watching films since childhood and have learned the grammar so well that it feels intuitive. But the machinery falls apart when we approach films that move beyond conventional storytelling. Funny, we don’t complain when a poem doesn’t have an easy-to-follow plot like a novel, yet we expect a movie to have a clearly-defined story. 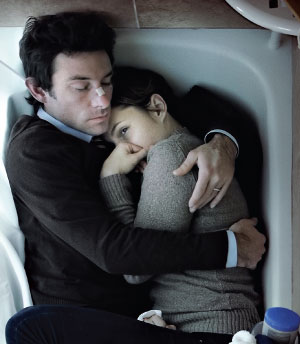 Few in the industry raise this question more than Shane Carruth. This bold filmmaker first burst into our consciousness in 2004 with his mind-bending Primer, an impossibly twisty tale about aspiring entrepreneurs who build a time machine in their garage and soon find themselves lost in a seemingly endless series of reversals and betrayals. For those willing to enter Carruth’s cinematic labyrinth, the film could be endlessly seductive. Primer inspires viewers to watch it often and study it closely until it reveals its secrets. But that wonderful seductiveness is also the film’s greatest flaw. Numerous websites are dedicated to unlocking Primer’s mysteries and many viewers become obsessively lost trying to decipher what happened, missing out on the film’s deeper meanings.

Upstream Color, Carruth’s new rabbit-hole of a movie, will undoubtedly inspire similarly obsessive viewing. However, no one watching this haunting and powerful new movie could think that any amount of viewing would lead to solving the film’s endless ambiguities.

In 1845, Henry David Thoreau purged his life of anything he viewed as unnecessary and went to live in an isolated cabin. Thoreau wrote about his experiment in his classic masterwork Walden. The book, which is featured prominently in Carruth’s film, is one of the few obvious touchstones of Upstream Color, which could be read as a nightmarish modern adaptation of Walden.

Without explanation or preparation, Carruth plunges us into the experience of two people. The woman works at a movie special effects house. The man is a middle manager. Each is abducted by a strange cult and taken over in both mind and body. Everything is stripped away from them: Their money, their beliefs, their confidence and even the certainty of their memories. They are forced into the awareness that they are simply pieces of a larger process. Unmoored from all they took for granted, they must find their way in a new and suddenly alien world with nothing to hold onto except each other. Actually, that plot description barely begins to properly evoke the phantasmagorical experience of watching this mesmerizing film. Carruth throws us without warning, like his protagonists, into a universe that is both familiar and utterly mysterious. Depending on your approach to the film, Upstream Color will take you on a journey that is either frustrating or hypnotic. The choice is yours.