From “On a Grove” by The Second Hands

The Second Hands are Long Island’s answer to The Swell Season (folk duo Glen Hansard and Markéta Irglová) with a storyline similar to the Irish musical film Once (two lovers making music together). Singer-songwriters Geoff Schroeder and Laura Hoch met at an open mic at Martha Clara Vineyards in 2009. A Mattituck native, Schroeder had recently returned from a two-year stint in Nashville, and was doing his “one-man band thing,” playing drums and guitar at the same time. Apparently Hoch was impressed and when the native Floridian sang a Hank Williams tune the following week, Schroeder “fell in love with her.” They began writing music together almost immediately. “We play mostly folk and roots-based music but we both love soul music, roots reggae, rock and roll and country,” notes Schroeder, who sings and plays guitar, mandolin and banjo. “We both really discovered a lot of music together. She turned me on to Gram Parsons.”

Schroeder grew up listening to his parents’ music: Bonnie Raitt, Bob Dylan, Neil Young and The Band. It wasn’t until he was in his late teens and early 20s that he got into soul and old-time country like Roger Miller. Hoch, whose father lived in Westhampton, grew up in Southern Florida with her country music fan mother. In the small rodeo town of Davie, Hoch was exposed to Gram Parsons, Lucinda Williams, Lyle Lovett and the Cowboy Junkies. “I think I absorbed that type of songwriting and it always felt like a natural part of me,” recalls Hoch. “Country music certainly wasn’t considered to be cool by my young peers, so it was sort of a closet fetish until college when I felt like I could dive into it without shame.”

While studying studio composition in the music program at SUNY Purchase, Hoch played guitar and sang as a solo act. She moved to Manhattan for a couple of years, became part of the “anti-folk” movement and toured Europe with the band Herman Dune before returning to Long Island. She and Schroeder now live in Greenport with her two elementary school-aged kids.

The duo started out playing covers to get gigs, calling themselves The Second Hands because they were playing “second hand songs.” The name stuck. Their self-titled debut was recorded at Caroline Doctorow’s studio in Bridgehampton and engineered by Pete Kennedy of folk-rock duo The Kennedys. It consists of ten quirky yet heartfelt originals featuring vocal harmonies and a stripped-down sound accompanied by mandolin and electric guitar throughout. “In a lot of bands, the instrumentation is the big thing and the vocals and the lyrics come secondary,” says Schroeder who was influenced by Marc Bolan’s guitar playing. “But I think, especially on our first record, the songs are all very lyrical because the words are very important to the songs that we write. And the instrumentation wasn’t secondary but it was just simple.” 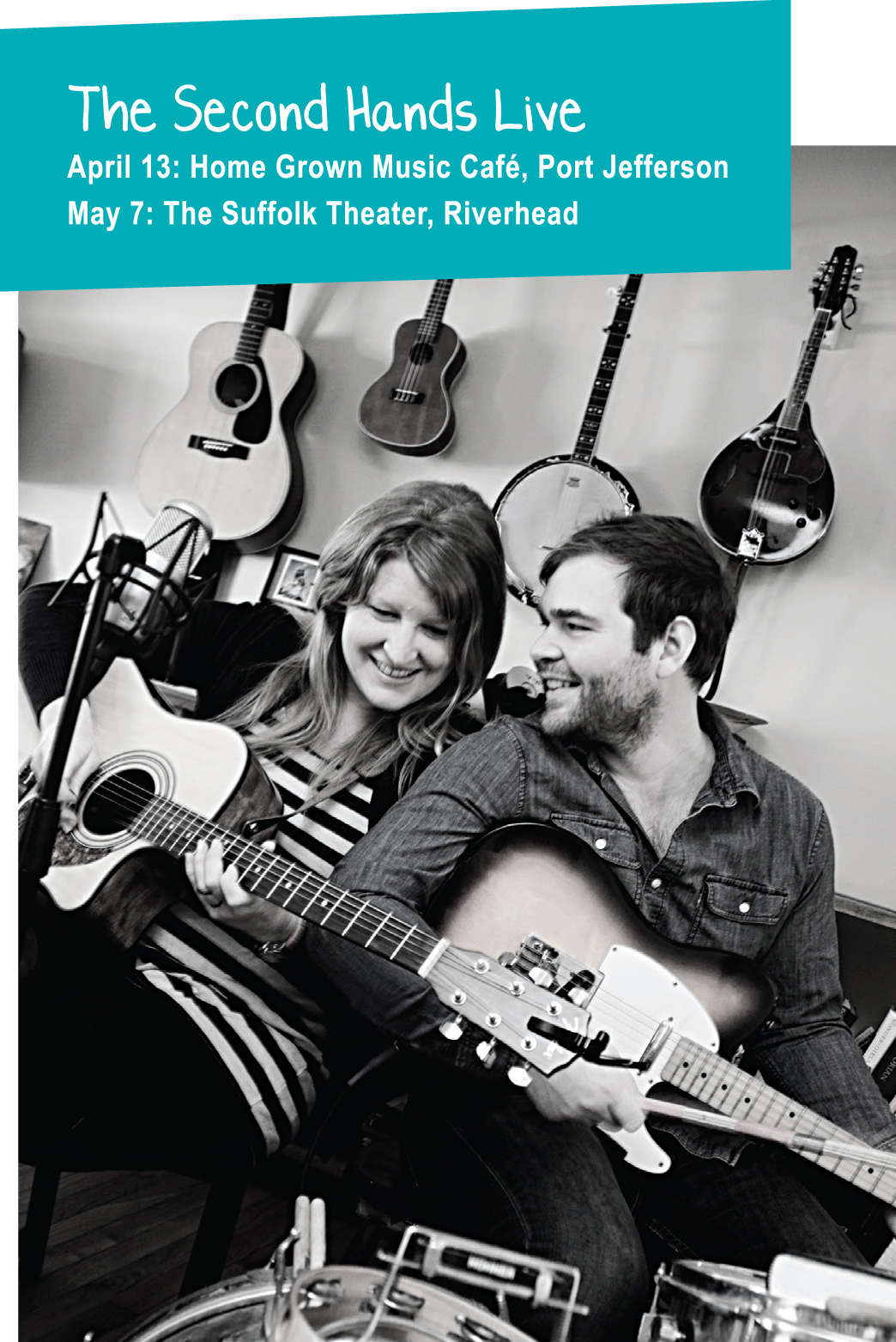 A number of their songs are written about one another (Schroeder’s favorite song to perform live is “On a Grove,” which he wrote about Hoch and her upbringing), but imagery-filled songs like Schroeder’s “My Indian’s Engine” (about living life to the fullest) and Hoch’s “Love is a Brute” involve the element of fiction. “I’ve recently had a lot of fun writing songs as stories,” notes Hoch, who also plays the ukulele and harmonica. “‘Love is a Brute’ is a sad story of a woman who is madly in love with a bad man. I picture her as the other woman who knows she’s being terrible but can’t break the addiction.”

Opening for the Dirt Farmer Band (featuring Larry Campbell and Amy Helm) last August at Peconic Bay Winery, where Hoch and Schroeder also work full-time, was exciting for them as fans of Levon Helm, and they intend to tour the northeast and release a new album by the end of the year. “I’d like to bring in some more musicians on the next record to add a little more production value,” Schroeder says. “Maybe some drums, but no John Bonhams, none of the crazy guys… It’ll still be lyrically-based, rustic folk with some soft, quiet tunes but will also get loud and gritty with more electric guitar and compelling beats.”