California native Joe Hayes traveled cross-country after brewmaster stints at Sudwerk Brewery and Red Rock Winery & Brewery before joining Black Forest Brew Haus in 2003. The German-style brewpub’s model of on-premises brewing and no outside distribution was perfect for Hayes who could focus on quality recipes, not marketing. “I’m a traditional brewer and I’ve always enjoyed the idea of going somewhere in your immediate area for a specific brewer or beer,” says Hayes. “I didn’t want to fight for shelf space and worry about how my IPA is selling compared to the others, so the brewpub atmosphere was ideal.” Hayes brews Amber, Hefeweizen, Pilsner and 18 various seasonals in a copper-clad, ten-barrel system situated amongst customer tables (like hibachi, but undoubtedly hipper). The seasonal collection includes Maibock, a malty, smooth-finishing beer balanced by light hopping and completed after six weeks of lagering. “It’s our true first sign of spring,” says Hayes. 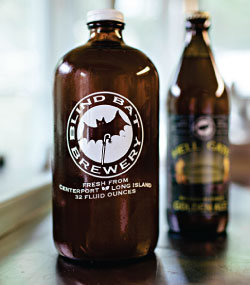 Brew News
Blind Bat Brewery is officially leaving the nest, er, cave. Paul Dlugokencky operates the nanobrewery in a shed behind his Centerport home, but is now expanding to a space in Farmingdale. Dlugokencky launched a beer club to raise funds for the transition and will reward members with beer. Perfect. blindbatbrewery.com. Blue Point Brewing Company hosts Cask Ales Festival on April 13, featuring 30+ breweries and the first appearance of their Mosaic IPA, which contains Mosaic hops and will pour from a 1,250-gallon cask. Swimming anyone?