It was one of the most brutal matches in wrestling history. The 1998 battle billed as Hell in a Cell began with Mick Foley (as Mankind) grappling with The Undertaker on top of a 16-foot-high steel cage. Foley took two gigantic bumps (wrestling lingo for hard falls) that night: The first when he was willingly thrown off the cage, crashing his 280-pound frame through a ringside table. The match appeared to be over as he was wheeled out on a stretcher, but Foley climbed back up to the top of the cage and the fight resumed. The Undertaker then choke-slammed him and the ceiling of the cage gave way. Bump number two. Foley fell through and landed flat on his back in the ring below. He briefly lost consciousness, but came back and the bout continued with more blood and mayhem and, of all things, thousands of thumbtacks that Foley himself scattered across the ring before he was body-slammed on top of them. The night ended for him with a few gaps in his memory, a dislocated shoulder, a concussion, several bruised ribs, internal bleeding, countless puncture wounds from the thumbtacks, a dislocated jaw and the loss of at least one tooth, which was famously photographed coming out of his bloody nose. Most of all, it cemented his legacy as one of the most hardcore and daring personalities in wrestling history.

Although aspects of this show may have been planned, it was anything but fake.

Now Foley returns to the ring in a less violent fashion with his induction into the WWE Hall of Fame at Madison Square Garden on April 6. “I’ve been pretty close to Vince McMahon over the years and he still has a warm spot in his heart for me,” says Foley who’s been semi-retired since 2000, performing sporadically. His last match for the WWE was at the Royal Rumble last year, where his Mankind persona appeared and revived Mr. Socko, the sock puppet he keeps in his pants and stuffs in his opponent’s mouth with his classic finishing move known as the Mandible Claw. “When the sock came out I got the sixth standing ovation of my career. The first five were when I was headed for triage at the emergency room.” 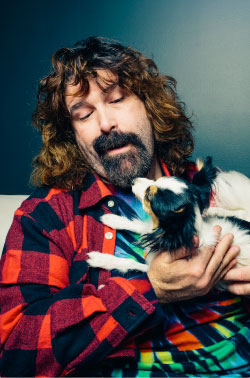 Foley grew up in East Setauket and attended Ward Melville High School where his father Jack was the longtime athletic director. He played lacrosse and wrestled in high school before going to SUNY Cortland and eventually pursuing professional wrestling. He paid his dues on the wrestling circuit, traveling all over the world gaining a reputation for his stuntman-like style and peculiar characters such as Cactus Jack (a hardcore bruiser) and later Mankind (a deranged schizophrenic) and Dude Love (a comedic hippie). “I’ve wrestled in 49 states and 40 countries… The way to climb the ladder in the wrestling world is to lay the groundwork for a grassroots following. You build up credibility with the audience. You work hard and put on a good show,” Foley says.

Foley was the heavyweight champ three times for the WWF (now the WWE), held the tag team belt eight times and was one of the main attractions during the 90s when wrestling enjoyed its last great peak in popularity. In 1998, after the Hell in a Cell match, Foley was overwhelmingly ahead in Time magazine’s online voting for Man of the Year but the magazine deemed him ineligible and eventually put Bill Clinton and Ken Starr on the cover.

Foley parlayed his wrestling experiences into a productive writing career, penning 10 books including four memoirs about his time in the ring. The first two—Have a Nice Day: A Tale of Blood and Sweatsocks and Foley is Good: And the Real World is Faker than Wrestling—both reached number one on The New York Times bestseller list. Along with his memoir series, Foley has also written four children’s books and two novels. “The biographical non-fiction worked well as an extension of the wrestling,” Foley says. “To get people to buy a novel requires a leap of faith. I’m proud of the work I did there, but it’s hard to make a living writing novels and I have four kids.”

In person or on tv, you’ve seen his bearded face, his smile and his flannel shirt, all of which are recognized worldwide. But those who know him best usually identify his great big heart as his most distinguishing trait. In his spare time Foley is a board member of RAINN (Rape, Abuse and Incest National Network, co-founded by musician Tori Amos) and a worker bee for the Muscular Dystrophy Association and Be a STAR, which the WWE formed with The Creative Coalition. “My wife Colette and I got involved in RAINN because there were not a lot of guys involved, only survivors and women. Be a STAR works hand-in-hand with that cause, helping to put an end to bullying. With MD we see kids that die too young. In the other causes we can make a difference if we speak up loud enough and long enough. I’ve spent several hundred hours online with victims of abuse, talking them through it.”

That ability to connect with a person in need just as easily as he did with a crowd of 20,000 screaming fans endeared Foley to legions of supporters. Considering his mic skills during his wrestling career, it’s no surprise how comfortable he is on stage doing stand-up comedy, a routine that is more storytelling than an unconnected string of jokes. “I try to make them laugh and even think about things a little.” Foley relied on political material in his act before the 2012 presidential election. “Now I need some new material,” he says. “So I’ll go to the local comedy clubs and try things out, see what works. I try to do four gigs a month when I’m home on Long Island.”

He’s universally beloved, comfortable speaking in front of a crowd and no stranger to tv, so it would be natural for politics to appeal to him, as it has for Jesse “the Body” Ventura and Linda McMahon. But while Foley briefly considered a run for the United States Congress, he “decided politics weren’t for me because the campaigns were so long and so ugly. I didn’t want to get home for dinner and have to go back out at night to be criticized.”

The closest he’s come to the big time political arena was being stuck in traffic one day with his eldest son Dewey. They got snarled up in the sirens and hoopla of a serious motorcade and as he glanced out his side window, Foley saw President George W. Bush looking at him from the back of a limousine. Bush smiled and mimed the bang-bang gesture Foley made famous as Cactus Jack. “Hey,” Foley said to his mystified son. “That’s George W. Bush.”

“I thought you hated that guy,” said Dewey.