I think that I shall never see
A poem lovely as a tree.

From Trees by Joyce Kilmer

Frank Bailey was a sickly boy born in 1865 to a physician and amateur botanist father who took him on nature trips to improve his health. The forays into the forests led to Bailey’s lifelong love of trees, resulting in his involvement in Brooklyn’s park system, where he also developed neighborhoods as president of the Title Guarantee Trust Company. But he also created the 42-acre Lattingtown sanctuary known as the Bailey Arboretum, which has been open to public since 1968. 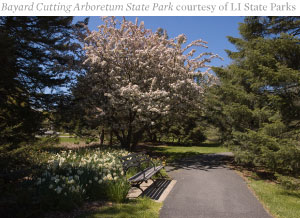 Bailey purchased the property and satirically named it Munnysunk before launching his mission to influence other horticulturists so that “tree gardens may some day become as common as flower gardens,” he wrote in his autobiography. He planted nearly extinct Dawn redwoods discovered in China, including one that became the world’s largest in circumference and the arboretum’s star.

About 100 feet tall, the tree is at least 17½ feet in girth and recently required 20 children holding hands to form a circle around it, said Michael Maron, superintendent of the arboretum. Open every day year round, it has trails, ponds, a children’s habitat and a picnic area. This month the arboretum offers nature walks and its monthly family nature adventures begin on April 7.

Another prominent tree collector was William Robertson Coe who used his fortune from businesses in railroads and insurance (including insuring the Titanic) to build the 409-acre, Oyster Bay estate now known as the Planting Fields Arboretum State Historic Park. A railway exhibit in its Coe Hall Mansion is planned for April 4 and the annual Arbor Day Family Festival is on April 27-28. “[Coe] imported big old trees,” said Vincent Simeone, director of the arboretum. “Linden and beech and oak are typical of the estate era. We have a large old weeping hemlock from the original estate.” Coe hired the Olmsted Brothers, whose father Frederick co-designed Central Park, to plan the grounds. There are close to 4,000 different types of trees now and as many as 20,000 individual trees. New species of shrubs and trees are added regularly: Rhododendrons, tree peonies from Asia, magnolias. “Mr. Coe might have had three or four dogwood species, but now we have 20. We don’t introduce things that are inappropriate, however. We wouldn’t put in a bamboo collection. It’s a European style, a landscaped English park look,” that keeps with Coe’s English background.

In April, more than 100 different styles of magnolia will be in bloom at Planting Fields. 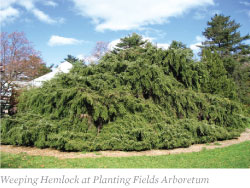 The Bayard Cutting Arboretum, a 691-acre state park in Great River, is a bit older. William Bayard Cutting started the estate in 1887 after prospering in railroads, sugar beets and real estate. “He was one of the founding members of the New York Botanical Garden and was well-connected with famous plant collectors, botanists and plant explorers,” said executive director Nelson Sterner. The aforementioned Frederick Law Olmsted (of Central Park fame) helped design the arboretum on the Connetquot River before Cutting’s wife and daughter transferred part of the land to the state after his death in 1936. They wrote that it “shall be an oasis of beauty and of quiet, and that it shall be a source of pleasure, rest and refreshment to those who delight in outdoor beauty.”

The property includes a mansion (with a café), a barn, pathways, woodland gardens, perennial gardens, ponds, a river walkway, many rare and unusual trees like bald cypresses and black tupelos and a five-acre back lawn with Adirondack chairs and other seating. “It’s the type of place that really has a tremendous following. It’s generational. Some people have come for 30 years and bring their kids and their grandkids,” said Sterner. In April daffodils and tulips brighten the areas between trees and on May 4 the arboretum celebrates its second annual “I Love My Park Day.”

Since part of the purpose for many arboretums is scientific study, it’s fitting that two are on university grounds. The one at LIU Post in Brookville opened on Arbor Day in 2002, but “the groundwork, if you will, was laid out in the 1920s when it was a country estate,” grounds manager Case Joosse said. The Tudor mansion on the 307-acre campus was once the home of cereal heiress Marjorie Merriweather Post and her husband, Edward F. Hutton, of Wall Street fame. They hired renowned landscape architect Marian Cruger Coffin, who also worked for the Fricks and other Long Island families, to design gardens and plant trees.

There are now 4,000 trees on the campus, but only about 125 are part of the 40-acre arboretum, which offers a self-guided walking trail and is open to the public from dawn to dusk seven days a week. About a dozen trees are left from the estate days, Joosse said, and new ones have been planted since he arrived in 1981. Older trees include Blue Atlas cedars from Northwest Africa and a Scotch elm that is actually two elms grafted together. Japanese dogwoods, set to bloom in April along with daffodils, tulips and forsythia, are among the newer trees. Originally the grounds were developed to “duplicate the estates of England” and “to basically show off,” he said. However the arboretum is for “education and community outreach.” Biology classes make use of the trail and Joosse occasionally leads group tours.

The entire 240-acre campus of Hofstra University in Hempstead is an arboretum, too. One of 430 recognized by the American Public Gardens Association. Though the school started in the 1930s on a property originally owned by Dutch immigrant and lumber magnate William S. Hofstra and his wife Kate Mason, it covered only 14 acres and was more like a farm than an estate, said arboretum director Fred Soviero. Though many acres and trees have been added since, a Japanese Katsura is the only tree left from that time. 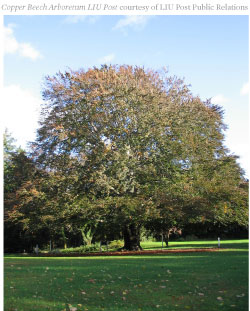 Hofstra’s North Campus was once part of Mitchel Field, an airfield riddled with concrete runways until a beautification effort started in the 1970s added flora, resulting in more than 12,000 trees representing about 625 different species, including 110 different kinds of conifers in a pinetum, Soviero said. The pinetum includes a Monkey Puzzle, an angular tree from the Andes Mountains in Chile that was planted in the mid-90s and can grow to be 100 feet tall. “It’s unusual looking, very spiny. You can’t touch it.” Other unusual trees are an upright green pillar oak, a Shumardi oak, maples and ornamental weeping cherries. Trees likely to bloom in April are the Okame cherry trees, flowering apricot trees with purple and pink blossoms, star magnolias, cup and saucer star magnolias and Cornelian cherry trees, which are in the dogwood family. Many shrubs will be flowering, too.

Markers identifying 400 to 500 of the trees assist the science classes who study them. Art and creative writing classes also use the arboretum and Soviero has spoken to students about trees in literature. Shakespeare, Elizabeth Barrett Browning and Robert Frost praised trees, as did Long Island-born Walt Whitman, who wrote: “Why are there trees I never walk under but large and melodious thoughts descend upon me?”

“It creates an environment for students that is part of their learning,” Sorviero said. “It’s as much a part of the students’ experience as their classrooms, culture and the arts.”

From Under the Greenwood Tree, a song in Shakespeare’s As You Like It