When the British were, as the oft-quoted mnemonic goes, coming, or rather about to come, one balmy evening in April 1775, legend has it that Paul Revere set up a system to alert the patriot world in New England of their intentions. One lantern would be lit for a few clandestine seconds if the bad guys were to come by land and two would appear if they were to come by sea. That way, the good people of Concord would know the deal and take the necessary precautions to preserve their liberty and put the finishing touches on making the country we know and love today.

Sometimes I wonder what would’ve happened if the good people of Williamsburg had time to set up such a system before the place was invaded by Manhattan refugees, gentrification and what might one day be called Close Encounters of the Hipster Kind if imagined in proper cinematic fashion. But, alas, they didn’t and what happened happened. The rest is another kind of history for another kind of story because Brooklyn has been and will always be defined by a timeless hipness and community spirit that doesn’t have to stop and smile for the camera.

Three if by day…

Coney Island, playground of Beat writers, high school lovers and amusement park aficionados, has been rebuilding since Sandy, which caused quite a dent in the architecture and lives of the folks who live in and around there. But Coney Island is resilient and by the time you’re reading this it will most likely be on its feet smiling proudly and welcoming you to its zany good time. On certain days, particularly cloudy ones where the sea breeze pushes brine and fantasy up through your nasal passageways, it feels and looks a lot like Atlantis or some other fabled city of yesteryear’s imagination. And on other days when the sun shines at the right angle, the wise old rickety Cyclone appears young and mighty again as it exchanges stories with the new boys on the boardwalk and boasts of how it and the Wonder Wheel took your parents for a ride while they shoved hundreds of Nathan’s Famous Franks down the hatch and licked the mustard off each other’s lips. 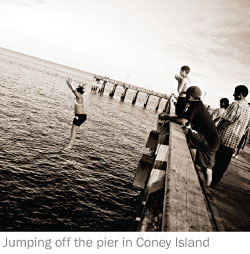 If the parks of New York City were jewels gracing its necklace, Prospect Park would be the one everyone keeps talking about after the party’s over. It’s not as big as Central Park and certainly doesn’t have the history and hoopla, but god is it beautiful. Its hills frolic and play like a child while its dark woodlands repose like a pensive friend who is all ears. The park is 585 acres of dynamic ecological habitat for all sorts of amazing flora and fauna—and stuff for humans, too. There are ball fields and greenways and spaces to barbecue and hold various events. You can run and bicycle and even go for short hikes. In the summer months, the Prospect Park Bandshell hosts the Celebrate Brooklyn! summer arts festival, which features a wide array of incredible artistic talent like Yo La Tengo and Belle and Sebastian. There’s even a zoo complete with sea lions and pandas if you’re into that kind of thing, though most people who visit the city’s most beautiful park will note that it’s an escape from another kind of zoo they’re after.

Among the neighborhoods surrounding the park is Prospect Heights. Here the historic and totemic Grand Army Plaza and its gigantic arch greet revelers and mischief-makers with stoic prominence and muscular grace. It’s quite a sight to see along the way to the Brooklyn Public Library’s central branch, a behemoth of a building that will make you consider books as apostles and the stories and information in them the only religion worth following. The library hosts concerts and art exhibitions throughout the year, but if it’s a real museum experience you’re looking for, head down the street. The Brooklyn Museum is the second largest art museum in the United States. The first is the Met in Manhattan (seeing a pattern here?), but the Brooklyn Museum feels more diverse in its curatorial arrangements and long-term installations on display. Perhaps this is indicative of the borough itself, an über diverse place where all are accepted and live alongside each other like, well, the greenhouses of The Brooklyn Botanic Garden, which is also not too far down the road.

Four if by night…

As the sun sets past the farthest reaches of the BQE and you make your way toward the land of giants, consider a pit stop in the truest melting pot of them all. It’s Fort Greene and it’s spectacular. There is a lot of commotion over the building of the Barclays Center (much of it for good reason), but it definitely electrifies the place with Jay-Z-like energy, wide-eyed wonderment and miles of amazing restaurants. A French restaurant next to a Cuban restaurant next to an African restaurant…the really good ones were around before the neighborhood blew up, of course. Just ask Spike Lee, Fort Greene’s favorite son, where the good stuff is. He’ll tell you. If you’re lucky, he may even direct you toward the Brooklyn Academy of Music, which plays his films and a whole lot more. World-class programming for a very worldly neighborhood whose shine is turning heads right now. 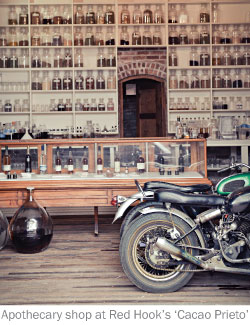 DUMBO stands for Down Under the Manhattan Bridge Overpass and if you think a place with that moniker might be a bit weird, it was, up until a few years ago. Before the lofts and boutiques and atypical art galleries arrived, DUMBO was a noisy bunch of streets and industrial warehouses en route to Brooklyn Heights. Now it’s home to the recently transplanted (from Williamsburg, no less) Galapagos Art Space and its authentic burlesque shows and Nerd Nites, and St. Ann’s Warehouse for fans of edgy music and the avant-garde. And what goes better with an intoxicating Brooklyn night out than the literal icing on the Jacques Torres chocolate cake or doughnut or brownie or whatever else is on the menu for the end-of-the-night feast of dessert at Brooklyn Bridge Park? Not much.

Follow the park west and you’ll cross into Brooklyn Heights, where Walt Whitman may have written “Crossing Brooklyn Ferry.” Either way, the words of the poem are woven into the architecture and the view of the Brooklyn Bridge is breathtaking enough to remind you of a more innocent and wide-open America of possibilities. It might make you shift into anaphoric poetic cadences yourself. (Here the promenade sinews its way along the coast and undresses lower Manhattan’s most intimate skyline. Here you meet your cobblestone self genuflecting in front of brownstones.) The famous Grimaldi’s Coal Brick-Oven Pizzeria is in Brooklyn Heights and even though original owner Patsy Grimaldi moved on, the food is still delicious. If stirring up trouble is your kind of mischief, walk next door to Patsy’s new place Juliana’s and start some static about whose sauce is the best. Fists may fly like pizza pies.

The pulsing heart of BoCoCa—which is a portmanteau for Boerum Hill, Cobble Hill and Carroll Gardens—is Smith Street, a little nook of great restaurants, amicable bar-hopping and overall good vibes. It’s filled with unique fashion stores that are open late for little drop-ins after a night of drinking and eating (what I like to call “bar shopping”). It’s kind of like Huntington or Patchogue gone wild with regard to eateries and culture. And sort of like Northport in its fierce support of all things local (though that’s changing). Smith Street used to be the conduit between the quintessential Brooklyn of Court Street and the gritty reality of Hoyt Avenue Housing. It was truly a place of transition, connecting two worlds so vastly different yet so geographically close. Now fifteen years later and officially “turned over,” Smith Street is at another kind of crossroads. It’s blending the youthful impishness of Williamsburg and the late baby boomer aesthetic of neighborhoods like Park Slope, which for the curious is fine enough as a destination—there are plenty of options.

The most admirable and interesting part of Smith Street—and the idea of a neighborhood “turning over” as a whole—is that it somehow retains the integrity of the community it used to be (minus the crime and violence) while being the community it presently is. The newly renovated Latin American restaurant El Cibao (now called El Nuevo Cibao) is a good example. It was there before the start of the boom and it’s still there now doing what it does. And it’s doing well enough that it has undergone some major aesthetic renovations. In other words, it’s got its skinny jeans on while serving up the same amazing camarones it always has. These are the successes by which to measure a community, no?

Steve’s Authentic Key Lime Pies
The veritable bomb of sweet godly sour bliss, Steve’s Authentic conduces a sort of euphoric “droolgasm” that is known to have made one seduced celebrity (who will remain nameless) follow the signs after hours to the random pier in Red Hook where the stuff is made only to find the shop closed. At which point he collapsed to his knees and screamed, “Oh, the horror, the horror!” stevesauthentic.com

Sheepshead Bay
Fishing. Brooklyn-style. This is the real deal if you want to get a feel for the old world and something uniquely Brooklyn minus the fanfare of modernity. The Sea Queen is a good place to start. seaqueenvii.com

Brooklyn Bowl
Some might call this Williamsburg, but I’m going to say Greenpoint for all intents and purposes and add that with tons of lanes, delicious food, great beer and rocking music, compliments of the great Peter Shapiro (The Capitol Theater, Wetlands), this is about as fun as it gets for a night out. brooklynbowl.com