The twists and turns in Mike Tyson’s life paralleled those that boxing fans saw in the ring throughout his career. His bouts were must-see events, ranging from totally awesome to truly bizarre, and provided a unique kind of entertainment only he could have offered.

Now another plot twist: The critically acclaimed one-man show Mike Tyson: Undisputed Truth, directed by Spike Lee for the stage. In order to get it off the ground, Tyson first had to embrace the mistakes he made as part of his life story. Then he had to lay them on the table for everyone to see and criticize—from his rape conviction and incarceration to his outrageous in-ring antics, including the bite heard round the world in 1997. The show is a window into his life and his mind: Part drama, part comedy, part theater and part real life. But then again, Mike Tyson was always larger than life and had a way of blurring those boundaries.

Long Island Pulse caught up with Tyson in the middle of his 10-week tour.

Long Island Pulse: What can people expect when they go to see Mike Tyson: Undisputed Truth?
Mike Tyson: They can expect a roller coaster of emotions. Everyone knows about me from the headlines, but here the audience finds out why I did this and why I did that. 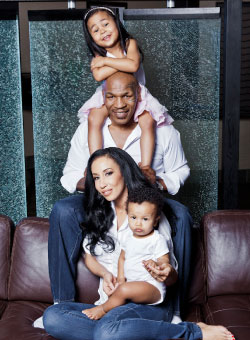 LIP: Why tell your story in this kind of forum?
Tyson: My wife and I went to see [the play] A Bronx Tale with Chazz Palminteri and it was so entertaining. He’s a great storyteller.

LIP: Why do people find Mike Tyson so fascinating?
Tyson: I have no idea. I don’t think I’m that exciting. I don’t look at myself that way. I’m just happy that I’m able to entertain them.

LIP: Would you ever be a trainer or promoter?
Tyson: I so desperately would like to get involved, but I’ve got so much interest in building my life and my family, paying our bills and cleaning up a lot of the baggage from my past life. I love this boxing fraternity more than ever. Forget about the money, boxing gave me the inspiration and made me believe I could do anything and that I could be the best in the world. No man could beat me in my prime. It was an awesome feeling. And it gave me confidence in other aspects of life also.

LIP: In what ways did your upbringing set you up for success as a boxer?
Tyson: My trainer, Cus D’Amato, was my mentor. He had great perception. Cus was familiar with Brownsville. I grew up in Brownsville. He knew everything in my environment and never took me out of my element. He was able to push me, gave me confidence and looked after me. I became his project.

LIP: Did you love to box or was it strictly a career for you?
Tyson: I loved making Cus D’Amato happy. That meant beating anybody, hurting anybody and that’s what I did. My goal was to make him happy. I never had a father, but I could imagine what it was like for a child who couldn’t live up to his father. I thought it must be so humiliating. I felt I was nothing. I didn’t want to live anymore. He talked about dreams and what I could be one day. He’d tell a lot of stories and I liked the sound of them. I’ve never met a person like Cus to this day.

LIP: During your career, you were viewed as one of the baddest men on the planet. Now because of The Hangover and some of the late-night skits, some might view you as more of a lovable figure. Which is it?
Tyson: In order to be the baddest man in the world, to be that particular individual, and in order to be the person I am now, to be this individual, you have to adapt. You have to have the ability to adapt to survive. I want to survive.