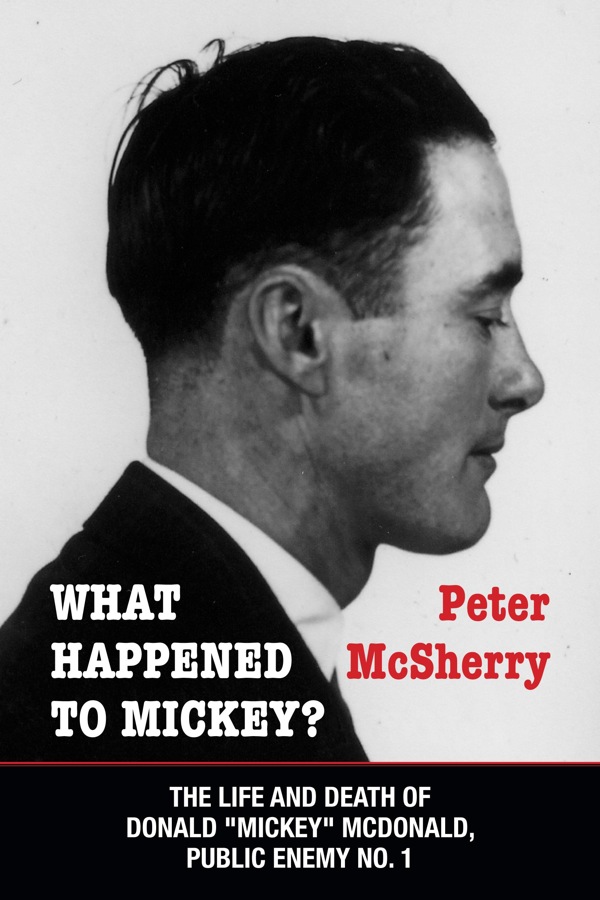 The water heater died this morning—just after you got into the shower.

That was, of course, right after you spilled coffee on your lap. Then, when you jumped up with a scream on your lips, you upset the plate that held breakfast.

Right onto the floor.

Some days are like that: you wish you could just disappear where nobody would find you. And in the new book “What Happened to Mickey?” by Peter McSherry, you’ll read about one man who somehow did.

Because of its brutality, the murder quickly made national headlines: small-time Toronto bookie Jimmy Windsor was relaxing after a busy day of collecting bets, when several men entered his house, beat Windsor , and killed him in front of his family. The public was terrified; it was 1939 and many considered this audacious crime as proof that gangsters had infiltrated Toronto.

Mickey MacDonald (later, McDonald) was born in 1907 in Scotland and moved with his family to Canada in 1914. By all accounts, little Mickey was a good boy until about age eleven, when he started committing small thefts.

Those petty capers escalated until Mickey was well-known to fellow criminals and police alike. Usually drunk, he was constantly in and out of jail and had unapologetically lured his younger brothers into similar lives of crime. He was, therefore, a natural suspect, especially since rumors placed him at the scene of the murder. After the trial, when Mickey was found guilty of Jimmy Windsor’s murder and sentenced to “hang by the neck until dead,” he screamed that he’d been framed.

Just days before his scheduled death, Mickey won a new trial. Amazingly, he was deemed innocent then, and set free.

But freedom obviously wasn’t something Mickey appreciated. Though he’d gotten sober while in jail, he continued living an unsavory life, cumulating in a heist that became known as “ Toronto ’s Greatest Crime of World War II” and a daring escape from the hard-time prison cell to which he was sent.

So what happened to Canada ’s infamous Public Enemy Number One?

Author Peter McSherry has theories, and in “What Happened to Mickey?” he explains them and shares rumors, posing the question of how long McDonald continued his crime spree after escaping and how long he survived. In learning about McDonald’s reckless life, I daresay that few readers would be surprised to someday learn that he temporarily cheated death, just like he continually cheated justice.

That cliff-hanging mystery becomes the perfect ending to what truly feels like an old noir black-and-white gangster movie on paper—and since a good part of it occured relatively recently, I think this book has an audience that’s wider than it first seems. If, in fact, you’re a history buff, an old-time crime fan, or if you just love a good gangster story, grab “What Happened to Mickey?” and watch your time disappear…