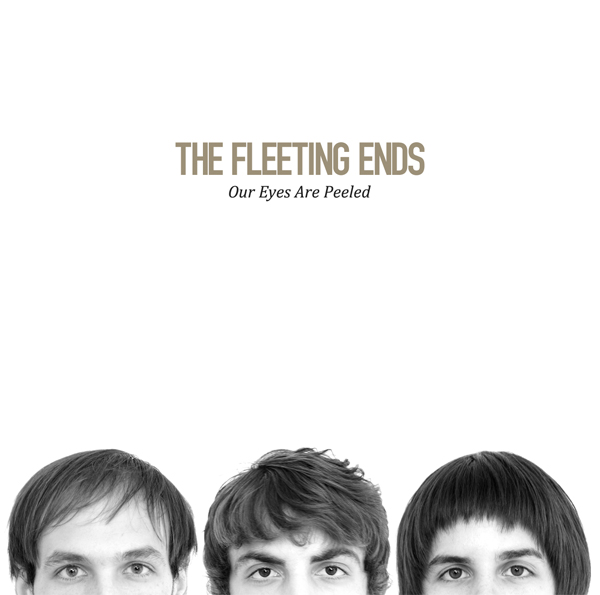 Ring in the spring with some upbeat rock—featuring two-part vocal harmonies, catchy hooks and surprising string arrangements. Indie power-trio, The Fleeting Ends, just released its second full-length, Our Eyes Are Peeled, and will be playing four shows at NYC’s The Living Room in April—the 2nd, the 9th, the 23rd and the 30th—in addition to The Studio at Webster Hall on May 11th. The record cover is reminiscent of the White Album by The Beatles, an influence which can be heard on many tracks.

The Philadelphia-based twenty-somethings—Matt Vantine on vocals, guitars and keys; Matt Amadio on vocals, drums, and percussion; bassist Rusty Langley—often listened to George Harrison’s All Things Must Pass when making Our Eyes Are Peeled. Aside from The Beatles, the band is inspired by the likes of Neil Young, The Cure, Blur, The Cars, The Pixies and The Verve.

“The biggest inspiration is other people though,” admits Langley. “Every song on the album tells a story about someone or a certain type of situation.”

“If you like catchy music with good lyrics and nice harmonies, then you’ll most likely find something to like about us,” notes Langley.

Having already won a Philadelphia songwriting competition and played numerous festivals including SXSW and Musikfest, The Fleeting Ends are definitely a band to watch. When they hit New York City in April and May, they also may be accompanied by their friend, Alfiya Latypova, on violin and keys.

“We’ve been known to do many covers,” reveals Langley. “Currently, we play ‘Barbarism Begins At Home’ by The Smiths, ‘I’m Waiting For the Man’ by The Velvet Underground, and ‘One After 909’ by The Beatles… We’re also working on the entire Steely Dan discography and planning to do a series of tribute shows.—this may or may not be a joke.”