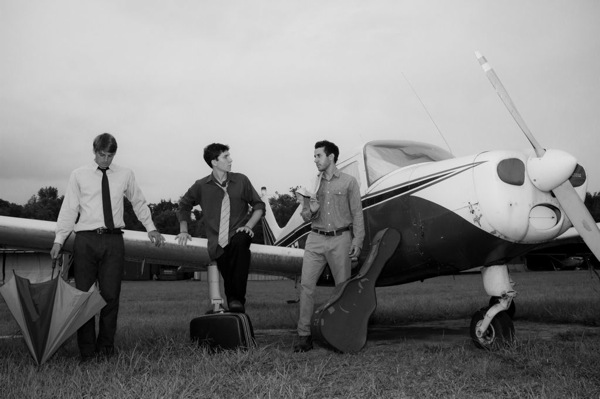 Three-piece roots rock and blues band, Mission South, is often compared to Dr. Dog, Ben Harper and The Black Keys. The DC-based trio—Dan Miller on guitar/vocals, John Beck on bass/vocals and drummer Max Harwood—is about to release its second EP, Migration Vol. 2, and will be headlining NYC’s Sullivan Hall on Thursday, April 11th.

With beginnings as a garage band, the best friends’ original songwriting and energetic live performances have garnered them a spot on DC Deli Magazine’s poll for Best Emerging Artist of 2012 and performances at Austin’s SXSW festival.

Lead singer Dan Miller dishes about everything from his diverse musical influences and covers to the meanings of his songs and how he hit Ben Harper’s sound guy with a CD.

Pulse: Who are your biggest musical influences?

Dan: Otis Redding, B.B. King, Charlie Parker, Bob Dylan, Tupac Shakur, Derek Trucks, and any innovator of sound who can evoke and convey sincere emotion through the music they play and create.

P: What’s your song “Peaches” about?

D: “Peaches” speaks to the contradiction one encounters when reflecting upon who they currently are, and who they were yesterday. A lot of times we sacrifice and do things we don’t enjoy to get to where we hope to be. And at the age of 22, you’re constantly redefining yourself and what you hold to be important.

The chorus refrain “I do it all for you,” is self-reflexive in this case, assuring me that all these things I do will make me better in the end. Although lyrics like that allow the listener to connect to the song on whatever level they feel.

D: We’re currently using the term “Roots Rock” to describe it. I say “currently” because, as a young band, our style changes pretty frequently. Our sound is certainly raw and at times experimental, but we like to carve pockets of soul, pop, and jazz influences into it.

P: Who would you most like to tour with? Why?

D: I’d like to tour with three bands. One of them is Star and Micey out of Memphis. They are great musicians and some of the best damn people you’ll ever meet. No shortage of good times would be had, and that always makes the journey much smoother.

The second band I’d choose is Kings of Leon. I’ve recently gotten into watching YouTube videos where they completely freak each other out onstage and backstage, and I think it would be great for entertainment—and for giving you confidence in your own band to see people fight like that.

Lastly, I’ll say Ben Harper. People liken my style to his a lot, and I think he’s an artist that has crafted a very long and diverse career for himself, which is something I respect highly in today’s music world. Would love to shoot the breeze with that guy for a while. I also once nailed his sound guy in the face when I threw a CD on stage at one of his concerts, so I’d apologize for that too.

P: Where did the band’s name come from?

D: A good friend of mine that I worked with during the summers in California would save up all his money from our summer job and then travel through Mexico and Latin America for as long as he could until he ran out. Every year, like clockwork, he had the same plan. The guy was in his mid-30s and one of the happiest people I knew. He would always call it his “Mission South.” The friend had found his place in the world, and the name is an allegory for exactly that.

P: Have you played in NY before? What do you like about playing here?

D: We’ve played in New York a of couple times, usually in Manhattan or Brooklyn. I like playing in the city because there’s an air of importance there that rubs off on you, makes you feel like you’re doing something right. We have a ton of fans in the city so it’s always a blast, and everything is open super late there, so there’s never a shortage of good times to be had.

D: I’ve really enjoyed performing “Saint” off of our new EP Migration Vol. 2 coming out April 9th. It’s a really beautiful song that John wrote, and a slower moment in the set. This song always sort of engulfs me when we perform it live, and I always come out feeling energized and ready to rock the last couple of tunes we’ve got on deck.

P: Do you play any covers live? Which ones?

D: We’ve been playing a cover of Prince’s “Kiss” lately because Prince is the bomb and we were able to put together a really cool version of his classic tune. A fan came up to us after a show recently and rolled up his sleeve to reveal an enormous Prince tattoo. He said we’d done the man justice. Pretty sure that’s all the validation you need in life.