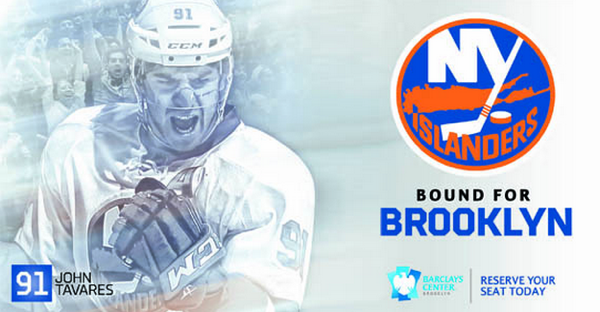 It was perfect timing for the folks at the Barclays Center to send out an email about Islanders season tickets just as they picked up a win and moved into the eighth and final playoff spot in the Eastern Conference with their latest 5-2 victory over the Winnipeg Jets on Tuesday.

“Bound for Brooklyn” was written on the email blast with a photo of John Tavares pumping his fist, likely after one of his 23 goals (second in the NHL) this season. Not so fast. There is still some winning left to do in Uniondale.

“Barclays Center will hold 14,500 seats for Islander home games, and is currently accepting deposits for priority to purchase season tickets.”

That’s all well and good, but 2015-16 is still a long ways off. Can we focus on the positive that is still left to happen at the Coliseum, please?

Tavares has been the backbone this year, but everyone has bought in. Nabokov is almost back to his All-Star form from 2008, winning 17 games so far through Wednesday afternoon. Of course it’s a far cry from his career-high 46 wins in 2007-08 with the Sharks, but he has been strong, including wracking in three shutout victories.

Don’t forget Matt Moulson and his 37 points this season, many of which are the assists to goals from Tavares.

Anders Lee, a prospect out of Notre Dame who finalized his deal with the Islanders before making his debut against Winnipeg, scored his first NHL goal against the Jets. It’s yet another memorable moment in the hallowed grounds just off Hempstead Turnpike.

“I was just trying to get the puck to the net, especially in the first period,” Lee said after the game. “I was so surprised. I just threw it on net, it happened to go in, and the boys came to congratulate me. It was pretty awesome. My head was spinning at that point. If it wasn’t enough to be playing in my first game, that was really exciting.”

Islanders fans have their heads spinning too as of late with the team in the thick of playoff contention. As of Wednesday afternoon, the Islanders are tied with the Devils at 39 points. New Jersey is in seventh, the Islanders are in eighth with the Rangers breathing down their necks (37 points).

We’re still two years off, but wouldn’t it be something if the final game ever played at the Coliseum were a playoff win? That seems awfully perfect. The push starts now.