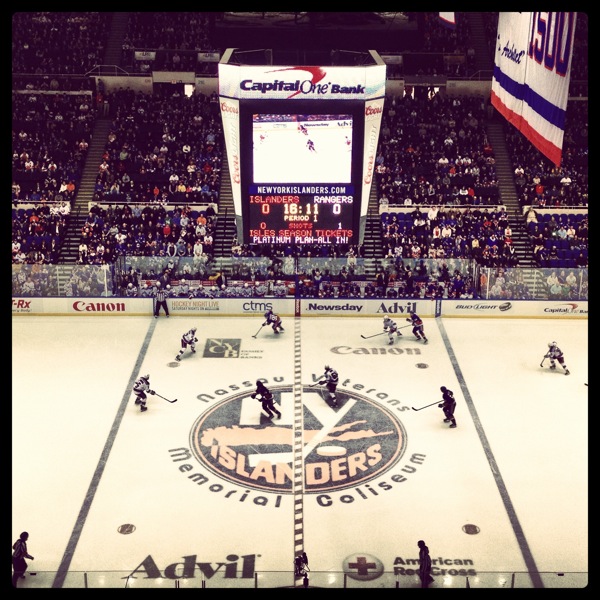 They’ll take the point. Against their feisty and hungry rivals from the west, the Islander played one of their best games of the shortened 2013 season when the Rangers came to Uniondale on Saturday night.

The Islanders, who outshot the Blue Shirts each period and controlled the puck a majority of the contest, lost 1-0, in overtime when Dan Girardi roofed a shot over Evgeni Nabokov’s right shoulder.

“It’s tough to swallow the pill to play the way we played,” said Nabokov, who has led the Isles to an 8-2-1 record in the last 11 games, “but on a positive, we played well and both teams were battling. I think both teams deserve a point, that’s for sure. It’s like a playoff game, that’s exactly how a playoff is, lower scoring games, a battle everywhere in front of the net.”

The second period was one of the most electric, energetic and complete 20 minute sets of hockey the Coliseum has seen in a long time; crisp shooting, timely saves, strong puck movement and a powerful presence.

The only problem was Rangers goalie Henrik Lundqvist was simply unbeatable. The reigning Vezina Trophy winner made a number of glove saves and was always in the right spot to put a hold on any celebrating for the Islanders faithful.

“We’ll take the point and move on,” said Islanders coach Jack Capuano. “It was a good game, it was a good pace. I thought that was one of the better hockey games that we played all year.”

With Islanders legends Mike Bossy and Kenny Jonsson in the building and legendary broadcaster Jiggs McDonald on the television call (Howie Rose was in Minnesota with the Mets for WFAN), there was a feeling of yesteryear familiar around this time of the season. It’s the feeling of playoffs and an extension on the schedule for another couple of weeks.

Even the game notes are starting to pack historical lines that haven’t been thought of or researched in decades:

*Capuano recorded his 81st head-coaching win with the Islanders on Thursday and tied Terry Simpson for second place on the Islanders’ all-time wins list.

The Rangers took a slow and daunting skate over the Islanders logo back from the far corner of the ice after Girardi scored. Cheers and jeers showered the Coliseum.

“I thought we did a lot of good things, but the result is not the way we wanted it,” said Nabokov.

The Islanders have one more home game on Tuesday, April 16 against the Panthers, a lowly Eastern Conference opponent, and five games after that as the playoff hunt continues.