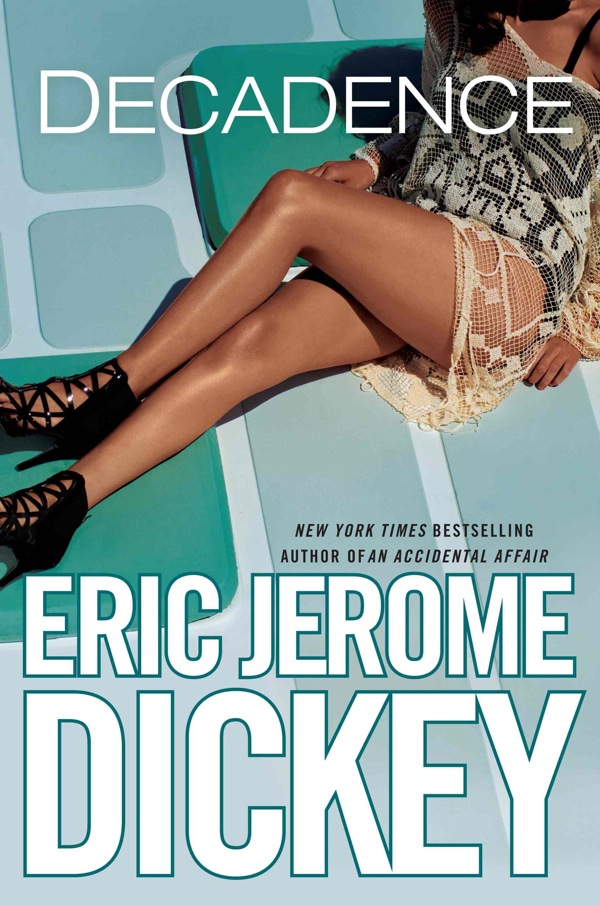 You’ll try anything once.

You’re daring when it comes to a new restaurant, new clubs, new fashion, pretty much anything. Something different for your plate? Bring it on. An activity you’ve never done before? You head the line. New technology? They call you First-Adopter.

Being open to new adventures keeps life fresh and exciting. And, as you’ll see in the new novel “Decadence” by Eric Jerome Dickey, embracing new experiences can also fulfill fantasies.

It had been six weeks since she last saw her lover, Prada, and though their weekend together left her sated, it wasn’t for long. She had hoped that her friendship with the soldier, Bret, would turn into a repeat of their one-night stand, but friendship was all he seemed interested in. And so, filled with desire, Nia Simone applied for membership to Decadence, a very exclusive and private swinger’s club four hours away from her Smyrna townhouse.

Decadence fees were astonishing, the medical process was thorough, and the interview was long and deeply personal, but Nia Simone had nothing to hide. She was used to being naked in front of others and she wasn’t afraid to describe her fantasies. She wanted new experiences, club rules were simple, and very little was off-limits.

On her first visit, she turned from Watcher to Doer. Decadence was a lover’s playground and she wished she could bring Prada with her, though she knew he’d never share her. And since monogamy was boring, sharing was what Nia Simone really desired.

But while Decadence was everything she needed it to be, it wasn’t as anonymous as she’d hoped.

Years before, when Nia Simone was in college, her heart was broken by her first love, a man who cheated on her with her pupil. It was still a fist to her gut when she thought about him—so seeing him in the club, watching him please that woman, brought white-hot anger to Nia Simone, and a need for sexual revenge.

Looking for a different Shade of Gray? You might find it here, so bring your oven mitts.

Yes, indeed, “Decadence” is hot with a capital “H.” It fairly blisters with explicitness—but it’s also relentless. Author Eric Jerome Dickey starts the action literally on the fourth word of this novel and he barely lets up until the end of the book. Alas, that relentlessness sometimes made me lose interest, which is when I started noticing a handful of words that are overused to the point of silliness, and a main character that speaks in tedious, faux-poetic metaphors.

To the good, though, there’s a thin plot in this book—which is better than some I’ve read in Dickey’s erotica collection. But really, let’s be honest: the plot isn’t why you’d want this book in the first place.

In case you didn’t catch on, this book is for adults only and shouldn’t even be kept in the same room with kids. If you’ve got that covered, then go ahead and give “Decadence” a try.