Zebra is coming up on 40 years of blending rock god riffs with thoughtful lyrics. Their landmark record Zebra is enjoying its 30th anniversary and singer/guitarist Randy Jackson, bassist/keyboardist Felix Hanemann and drummer Guy Gelso are getting together at the NYCB Theatre in Westbury on May 19 to celebrate. While it might not be sexy, dramatic or very rock ‘n’ roll, the secret to Zebra’s longevity, success and fulfillment boils down to integrity, diplomacy and the power of dreams.

“The longevity has a lot to do with the music,” said Hanemann as he and Jackson relaxed in the back of Massapequa’s Blue Parrot before a recent acoustic Jackson gig. “I think we were honest, that’s the overlying thread throughout the whole thing. We’re comfortable with each other, probably too comfortable. I think a lot of people get that about us. There’s no pretension. And we’re lucky enough to have an audience that comes to see us. Otherwise there’d be no reason to play.”

Zebra was born in New Orleans in the 70s, soaking up influences like The Beatles, Led Zeppelin, the Moody Blues and Pink Floyd. As they started to outgrow the under-appreciated New Orleans rock scene, Zebra got word that bands like Rat Race Choir and Twisted Sister were killing it in Long Island clubs like Hammerheads and My Father’s Place and they followed their collective muse north.

When Zebra was released in 1983, WBAB jumped on it, as did MTV. Zebra was the new Led Zeppelin IV. “Who’s Behind the Door?” was the new “Stairway to Heaven.” As other FM hits like “Tell Me What You Want,” “Take Your Fingers From My Hair” and “The La La Song” hit the charts, Zebra went gold. And while the band toured with the likes of ZZ Top, Aerosmith and Cheap Trick, Zebra continued to play locally (and still do). Zebra was grounded, yet transcendent. Zebra was badass, but they were also pensive and poignant. Above all, Zebra was ours. 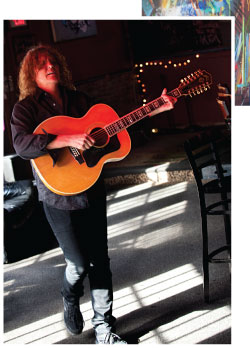 “Some of my best friends are up there [on Long Island],” said Gelso by phone from Louisiana. “There are so many great drummers and great musicians up there. It’s like I have two homes. First place I hit when I’m up there is either a great diner…or a bagel shop.”

On-stage, Zebra is as riveting as ever. Gelso is the best of both worlds, he’s got all the groove of John Bonham and all the pyrotechnics of Neil Peart. Hanemann is equally intense. All hell breaks loose when he steps away from the keyboards to rip the bass line on “Wait Until The Summer’s Gone.” And Jackson is both spellbound and spellbinding when he becomes fully immersed in his richly woven tapestry of string intricacies and melodic delivery. The sum of it all is magical in a way that only power trios can be; Zebra manifests the sacred geometry of triangles and the gut punch of power chords.

“The formula between the three of us just works,” said Gelso. “Felix is like a rock on bass. He and I just click. I can go off and do some crazy shit and he’s right there. Randy’s up front doing his thing and I get my cues off him. When I go off and work with other musicians it’s just never quite as good as Zebra.”

In conversation, Hanemann is affable and matter of fact about a broad range of interests from fine art to the NFL. Without trying, Jackson is an enlightening cross section of Led Zeppelin itself; he is both the swirling mysticism of Page and the hopeful flower power of Plant. In some ways, Jackson remains an old-school southern gentleman. He’s poetic and loquacious with an expansive knowledge of history, politics and music, all wrapped in the faint remnants of a Cajun drawl that peeks through with greater frequency the more animated he becomes. It’s a lot of intellectual diversity to fit into one project. And what has pulled it all together for Zebra since the beginning, aside from great chops, is chemistry, mutual respect and a desire to be great.

“We dreamt,” said Hanemann point blank. “I think musicians had more freedom to do what they wanted,” Jackson concurred while discussing the changes in music since Zebra started out. “Record companies were seeking out weird stuff, not safe stuff. When you’re a musician, you want to make music, you want to get chicks, you want to make money, you want to be famous. And when famous is first on your list, and money’s second…that’s not reality. That’s the lottery.”

Despite the flowing mane, the double neck guitar wizardry and the prog rock aura, Jackson is, spiritually speaking, the anti-rock star. He believes that abandoning selfishness in favor of a compassionate collective ideology not only drives his personal success and fulfillment, but that it could drive the world, too. It all begs the ultimate question, and you can’t ask anything of Zebra if you don’t ask them, with all sincerity, “Who’s Behind the Door?”

“I don’t know,” said Jackson. “Some people think it’s a song about God. And maybe it is. If you look at the lyrics, it vacillates between philosophy and a love song. The whole point of it is…get rid of the ego.”