I may consume a beer in May. I may paddleboard across Lake Ronkonkoma with a gang of nuns, too. Crazy month.

After performing a “ceiling to floor” renovation, Chris Motisi tackled his beer portfolio, adding 35+ bottles with a focus on diversity. “We installed coolers and added some larger bottles of different beer styles, which weren’t here with the old place,” says Motisi who opened The Local Ale House last September, replacing Island Park Ale House. “There’s good beer in Island Park and Long Beach, but it’s in the beverage centers. I wanted to change that and have a solid list for a bar.” If one prefers keg-flowing liquid, Motisi also pours 12 drafts, including Brewery Ommegang Rare Vos, a spicy, fruity Belgian pale ale.

Brian Curtin recently replaced Guinness with Long Ireland Beer Company Breakfast Stout and was not assaulted with a sand wedge. “There was a huge uproar until people tried it,” says Curtin, general manager. “It was amazing to see their reaction turn from anger and dismay to pleasure.” Curtin has promoted craft beer at Blackwells for three years, pouring 10 drafts with most “made only miles away.” Though plagued with false preconceptions, Curtin wants people to know they can stop in without golfing or wearing a collared shirt. “Our biggest disadvantage is that the bar is so beautiful and our property is so well kept that people think it’s a private club. We want everyone to know that nothing is pretentious or formal here.”

John Swaine Jr. debuted a 21-draft growler station last year. While pours are primarily local, exceptions are granted for some non-Long Island exclusives including Tröegs Brewing Company Nugget Nectar and Dogfish Head Craft Brewed Ales 120 Minute IPA. The latter is dry-hopped daily for one month and then aged for another on whole-leaf hops. Back to the locals, sometimes they try to move in: Larry Goldstein and Anthony LiCausi of Holbrook’s Spider Bite Brewing Company are longtime customers of Lake Ronkonkoma Beverage and even attempted to operate their brewery within the store. That’s love. 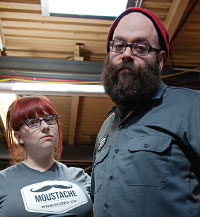 Brewery Hoppenings
There is a new brewery growing on my face. Moustache Brewing Company secured a location in Riverhead (joining Long Ireland Beer Company) and is preparing for an autumn-ish open. Owners Matt and Lauri Spitz raised $30K+ for the brewery on Kickstarter and will start with two beers: Everyman’s Porter (a smooth porter with chocolate and coffee notes) and One Drop Pale Ale (a citrusy sessioner). Oyster Bay Brewing Company is not growing on my face, but it will open in May. Gabriel Haim and Ryan Schlotter, homebrewers for two years, are starting with Amber, IPA, 2xIPA, Wheat, Raspberry Wheat and Stout. Haim’s cousin was brewmaster of Indiana’s Broad Ripple Brew Pub for 23 years, so beer is in his blood.