It was just a real estate deal.

In 2005, three years before the real estate bubble burst, Bellport-based entrepreneur Thomas V. Schultz and his investment partner, author Lawrence E. Joseph, saw picturesque Bellport as a great place to flip houses. Schultz honed in on a small cottage that was, as per his partner’s wishes, “the least expensive house in the village.” During his initial visit to the house, Schultz didn’t actually find the life’s work of obscure expressionist master Arthur Pinajian. Pinajian’s work found him.

“The realtor who was showing the house had stepped over the work countless times just to get by it,” Schultz explained as we pored over dozens of carefully stored Pinajian originals in Schultz’s now bustling Gallery 125. Schultz, who happens to have a degree in art history, recognized by the signatures and dates on the paintings that the vast stash was the life’s work of one artist. He also realized by the quality of the work that the discovery was potentially significant.

“[The artwork] was all around me: In the main house, in the garage, in the attic,” explained Schultz. “I made a snap decision that it had to be saved. We feel [Pinajian] knew we were capable of doing what we’ve done, which is to get his work to the next level. We were crazy enough. [Joseph] had the money and I had the time. We feel Pinajian chose us.”

Schultz’s serendipitous encounter was the second wave of fate to save the Pinajian collection. When Pinajian died in 1999, his cousin, painter and writer Peter Najarian, flew across the country to bring closure to his cousin’s affairs. When Najarian arrived in Bellport, Pinajian’s sister Armen (who cared for Pinajian his entire life) was literally in the process of hauling Pinajian’s work to the curb per his dying wishes. Najarian interfered and wrestled with the work for weeks, saving most of it and surrendering only a small, moldy minority of the collection to the jaws of the sanitation truck. “So it was almost thrown out…twice,” remarked Schultz in amazement.

What Schultz ultimately recovered was the complete canon of an unknown, yet undisputed expressionist master. It was a 360 degree arc of Arthur Pinajian’s life: His work, his philosophy, his brilliance and ebullience. Realizing what they found, Schultz and Joseph steadily enlisted a team of experts and assistants to help them protect, restore, organize, photograph, validate and subsequently bring the “Pinajian Discovery” to light. As a result of this process, Pinajian has quickly come to be recognized, as renowned art scholar William Innes Homer has dubbed him, “one of the greatest hermit artists of the world.” 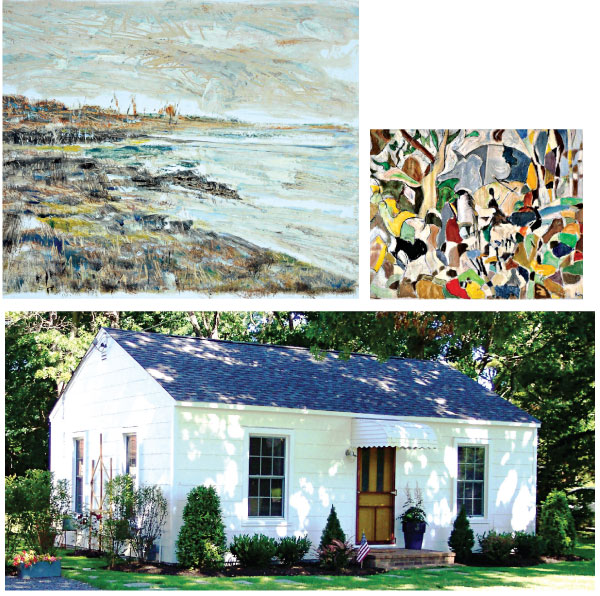 Born in Union City, New Jersey, in 1914, Arthur “Archie” Pinajian grew of age during the Great Depression and became an accomplished commercial and comic book illustrator prior to his service in World War II. After the war, he traveled some in the American Southwest and in Mexico, but split the majority of his time between Bellport and Woodstock, New York (both locales would be subjects of many of his breathtaking abstract expressionist landscapes). Clearly caught up in the artistic, cultural and idealogical shifts around him, Pinajian’s work gradually moved away from form and gravitated towards the formless.

“My gallery wants to hold my work until October, as she expects a women’s convention to visit here then. All this is quite boring, I know, so it is best to forget this selling bit. The horrible part is that they want crappy work or innocuous sentimental sketches. It seems my work is not even understandable (imagine that!) and I am too far out. The galleries can’t sell art since the public doesn’t know what it is…I am now trying to get my work to look like the crap that will sell and though I find this difficult I am determined to do it.”

This compromised effort did not last long. Pinajian’s creative obessions and experiments were not to be contained. In considering his scope of work over several decades, it appears as though he was caught between movements. His works often exhibit qualities of multiple disciplines simultaneously, fusing elements of impressionism, fauvism, cubism, surrealism and abstract expressionism, often with staggering results. He was both a student of Matisse and Picasso and a peer of de Kooning and Johns, but he seems to have slipped through the cracks of recognition during his prolific sixty-six year career. His commercial exile seems self-imposed, born not of bitterness, but of pure resolve. From Union City, New Jersey, April 24, 1970, Pinajian wrote:

“We may be thrown for a loss momentarily and set adrift, but we must philosophize ourselves back into our true orbit… The idea is to make money at what one wants to do and not to do what makes money… This gallery business makes a professional out of one without making him an artist… This duality in my mind will fester until I am able to push through to what I want and until I can put it on the line no one will ever see it.” 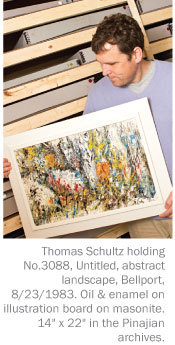 Aside from his unwillingness to do anything other than follow his instincts, what makes Pinajian special is the non-linear excellence of his career. He was equally adept as an illustrator, figurist, relativist and abstractionist. He was an extremely thoughtful artist, with a ploughman’s work ethic and a firm commitment to process. Pinajian was a loner, but a painter’s painter, dedicated to craft and fully engaged in the circular process of self-cultivation and effusive execution.

Like so many of the masters, his immersion in the metaphysical came about by way of a lifelong love affair with nature. His series of abstract landscapes depicting Woodstock’s Overlook Mountain and the harbor beaches of Bellport are particularly dense and passionate—intricate matrices of acrylic fireworks with just enough symmetry and cohesion to ground us and just enough strangeness to set us free. Pinajian’s intensity and his frequent mastery of delightful chaos speak to the mystery of the mind’s eye. His best abstractions are beautifully balanced, with a circulatory system similar to a Phillip Glass composition. They are firmly rooted in soothing tones that are steadily and subtlely subverted to create art that pushes beyond intellectual understanding to evoke a purely visceral experience.

“I feel I have come through the artistic mill and can now do anything I want. It does make things easier and I am sure it will work out… My inspiration is greater than ever now that I don’t have to share it with anybody. It is all mine and I shall pursue it with all my power.”

The universal connecting of dots that led Schultz and Joseph into the Pinajian vortex continues to reveal itself as of this writing. In the spirit of the artist himself, Schultz and Joseph are pursuing Pinajian’s artistic destiny for art’s sake, starting with the exhibition, Arthur Pinajian: Lost Master on view this month.

“It’s an amazing story,” said gallery owner and fine art collector Howard Shapiro by phone from Miami. “These are the things that you hear about and you dream about, but you never expect to be part of it.” Like all those touched by Pinajian’s work as this legacy unfolds (this writer included), Shapiro is unwavering in his enthusiasm. So much so he compares Pinajian to French impressionist master Claude Monet. “Due to the power and beauty of (Pinajian’s) landscapes,” Shapiro says, “I think, in time, Bellport will be to landscape what Giverny is to landscape.”

Arthur Pinajian: Lost Master, will be on exhibit at East Hampton’s Lawrence Fine Arts beginning May 20. Essayist and art historian Peter Hastings Falk will give a talk on Pinajian on Saturday, June 1 at 2 pm. For further details, contact the gallery, (516) 547-8965 or lawrencefinearts8@nullgmail.com.