It’s a phenomenon that hits every form of exercise, even yoga. Some call it the plateau, hitting the wall or simply getting bored. But to get the most out of yoga you need to push past your comfort zones. Luckily yoga studios across Long Island offer a number of diverse styles to make finding a new class as easy as stepping into a deep lunge. 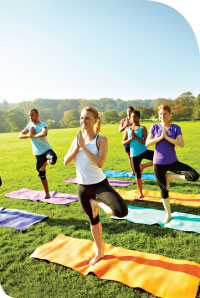 1. Laughter Yoga
The world needs more laughter, which is a founding tenet of laughter yoga. The style’s founder Dr. Madan Kataria calls it a “global movement for health, joy and world peace.”

The idea is that laughing first leads to happiness, rather than the other way around. “Laughter clubs” all over the world meet under the guidance of Certified Laughter Yoga Leaders (CLYL). Often the forced laughs become real and your body experiences the same health benefits during artificial laughter as from spontaneous expressions of joy.

No mat, no towel, no expensive yoga pants needed: Just show up with an open mind. And lest you think this yoga practice is all fun and games, laughing burns approximately 400 calories an hour.

Best for: Beginners or those with limited mobility.

2. Kundalini Yoga
Called the yoga of awareness because the style awakens “kundalini” energy believed to be along the lower spine. Gurus believe that if you coax that energy up and through the body, you can achieve an elevated state of spiritual consciousness.

This type of spiritual yoga uses breathing, poses, chanting and meditation in an effort to recruit not just the muscular, but the glandular and nervous systems of the body. Practitioners report tingles, a sense of healing and a renewed sense of energy.

At Blue Firmament Holistic Center in Rockville Centre, Kundalini is recommended as part of a holistic treatment plan for everything from Alzheimer’s disease, asthma, diabetes, pain, stress-related diseases, addictive behavior and mental disorders.

Best for: Those looking for spiritual as well as physical healing.

3. Yin Yoga
Most yoga involves stretching, but Yin yoga takes that to the next level. Often called a “deep, juicy” style of yoga, Yin’s poses are held longer at an intense point of flexibility to open muscles and all that grisly stuff: Tendons, ligaments and your joints’ creaky corners.

During a class at Breathe N Flow Yoga in Freeport, students move through a series of quiet floor poses to help open up any blockages, either physical or energy-based. Students believe the asanas—positions held for three to five minutes—target both the connective tissues of the ligaments, fascia, joints and bones and the “chi” and “prana” running through the body.

Best for: The tight, the sore, the injured, the creaky and the athlete looking for relief.

4. IntenSati
This mix of high-powered aerobic moves with the mindfulness of yoga is the brainchild of Patricia Moreno, who founded the style after struggling with eating disorders and depression. The classes feature what Moreno calls “affirmations in action,” a twist on the traditional yoga mantras. Practitioners are asked to repeat words and phrases like “gratitude” or “I embrace power” to encourage personal growth and positive thinking. The unique workout also incorporates elements from dance and martial arts.

Instructors trained in the style are listed on SatiLife.com and they’ll teach the classes at yoga studios and traditional gyms.

Best for: The fit yogi who wants to combine the sweating of a cardio session with the meditation and mood-boosting of yoga. 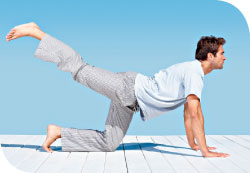 5. Broga
This one goes out to all the guys out there: Broga teachers have tailored yoga classes for guys. Taught from a male perspective, Broga was designed to help men who might otherwise be scared off by an intimidating atmosphere reap the benefits of a yoga. Broga is often described as the yoga “where it’s okay if you can’t touch your toes.”

Aerial Fitness in Riverhead is one of only six locations nationally offering the classes. Owner April Yakaboski dispels the myth that yoga can’t offer a serious workout for the athletic: “Many men have the misconception that yoga is a bunch of pretzel bodies sitting with legs crossed and humming. We do about 50 varied push-ups and core work, crunches, obliques, upper body, lunges and more in our Broga hour.”

And Broga isn’t just for the men, beginning female yogis will appreciate the welcoming atmosphere of the hybrid yoga-fitness class.

Best for: Men, beginners and those turned off by anything too spiritual.