Somewhere in our collective memory lies a New England summer. Clambakes on a pristine beach, cocktails on a veranda and lobster dinners at sunset. Whether these memories were ever real or just fantasies inspired by Brooks Brothers ads and Kennedy family photos, no matter. There is a corner of the Eastern Seaboard where such dreams are alive: The small, shingled community of Watch Hill, Rhode Island, where two legendary seaside Gilded Age resorts (Weekapaug Inn and Ocean House) have been renovated into highly-regarded luxury hotels.

Lately Rhode Island has been the site of a long-overdue foodie revival and for good reason. The Ocean State straddles a happy confluence of fresh seafood, boutique farms and the culinary traditions of a mélange of Italian, Portuguese and authentic New England. But with the Ocean House resort recently earning the state’s first five-star Fodor’s rating, the locale is garnering a reputation as a true luxury resort destination. 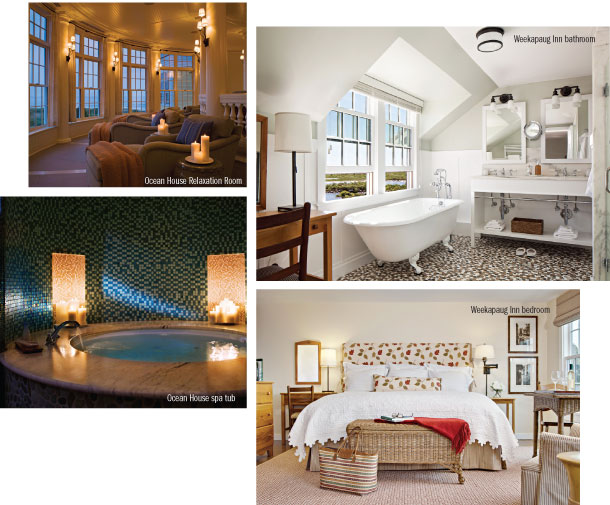 For Long Islanders, a taste of that storied grace by the sea is a short jaunt away by car, train or ferry. No amount of money can buy you entrée into the hazy, smoky doors of yesteryear’s privilege, but it will get you an all-access pass for the weekend. Taking the train to Westerly from Penn was a fitting way to start my journey to the historic hotel duo. Something about seeing the scenery flash by from the café car beffited the quaint scene I would be stepping into.

At the Weekapaug Inn, that unplugging from the freneticism of modern life was exactly what the owners had in mind when they fastidiously renovated the 114-year-old hotel last year. There’s no tv in the elegantly chic beach rooms (though you can request one). This is a hotel that saw generations of pre-media fun: The upstairs of the original Inn was notorious for coed children’s sleeping quarters. While parents relaxed on the main floor and danced in the large great room, the kids were free to get into summer shenanigans.

The tranquility of the Rhode Island vibe encouraged me to mellow out. After all, I wasn’t really anywhere in particular. Two hours from Boston, two hours from New York, I figured I might as well try a fizzy St-Germain and Champagne cocktail and soak in the expansive bathroom’s claw-foot tub. As I took in the pond and dune views out the window, the interplay of sky and water colors became my viewing screen. Sunset was a major event and cloud watching topped my to-do list.

In case I forgot what people used to do before movies, the Inn features a game room to encourage guests to mingle by the fireplace and activities like stargazing or bird watching with the hotel’s resident naturalist. For inspiration, I perused the original hotel logs that document a century of summer visitors, including Eleanor Roosevelt, and imagined what they did.

The anachronisms are present in the details: This is a hotel where the windows truly open and I imagined contenting myself with little old-fashioned pleasures: Riding a bike to explore the meandering sand spits, hunting for pebbles on the resort’s private beach or viewing the unpolluted night sky from the hotel telescope after dinner.

I didn’t quite relinquish my iPhone. I’d rather Instagram photos of my delicious s’mores bread pudding dessert at the hotel’s The Restaurant (which is known for farm-to-table cuisine and homemade pasta), but I started to feel the indignities of modern life dissipate. I enjoyed the complimentary room service breakfast without the blare of background noise. For a panicked second I wondered how I would dress for the weather without seeing the morning news, but then I took a deep breath and looked out the window.

My next stop, the Ocean House with its five-star rated OH! Spa, was just the thing to remind me to stop and smell the lavender bath salts, without tweeting about it first. Originally built in 1868, a recent $150 million reconstruction revivified the Victorian property, one of the last survivors of the old New England great hotel era. Watch Hill is rich in atmosphere and history and well, rich. After all, this is the kind of place where dressing for dinner is a ritual that hasn’t been cast aside in favor of casual living and convenience. Maybe our grandparents knew something after all about celebrating the everyday. Or at least, every vacation day.

The lovely beach beckoned, but instead I took advantage of all 12,000 square feet of the spa. I enjoyed a “deep relaxation” massage before exploring the facilities, including a saltwater lap pool and steam showers. Finally, I padded down the hall to the Relaxation Room, where the name struck me as a serious directive, so I settled onto one of the chaises in front of floor-to-ceiling ocean views.

I’m sure the wives of the Industrial Age barons had their own vanity rituals, perhaps seaside calisthenics in Victorian costume, but instead I stopped by the hotel gym to sneak in a quick run. And then another bath was a must, this time in a deep soaking tub in my tastefully posh room.

Food is a focus here and I was happy to organize my weekend around meals. Ocean House offers classes with their on-site “food forager,” who holds forth on the proper way to shuck an oyster or serve a cheese plate. Another scheduled activity had me tasting Cognac with the bartender in the red leather-decorated club room. I read the summer event calendar longingly: Clambakes on the beach, boat ride brunches, bonfires. I vowed to come back in the summer, the fall and even the winter.

The hotel’s restaurant Seasons is fittingly devoted to seasonal cuisine. For dinner I chose an artfully presented poached black bass from the rotating menu. Greens and meats are listed with their local farm of origin with a precision that would impress even the denizens of Portlandia. Culinary creativity is a common denominator and I tasted a cocktail accented with tarragon and rather than an overly-precious stretch, it was an instant classic, kind of like my Rhode Island weekend. It was hard to discern where the past ended and the present began and I wondered if there really was a difference at all.