Matt Harvey’s debut came on a late July weekday night. The Mets dropped six straight at home, making it 12 losses in their previous 13 games. So when they hit the road to face Arizona, with their promising young right-hander on the hill, even the most ardent fan could be excused for missing it.

Harvey’s first major league pitch, a 93 mile-per-hour heater, whistled over the outside corner—called strike one. He came back with a curveball that put unsuspecting Gerardo Parra behind 0-and-2, wasted a fastball high and then threw a slider that started over the plate before diving toward Parra’s feet. The veteran didn’t have a chance.

The strikeout was an eye-opener and nerves soon gave way to the beginning of a terrific night, a terrific 2012 rookie season and perhaps a terrific career in Flushing. The 24-year-old, Mystic, CT native has justifiably gained Mets fans’ attention and praise, especially after last year’s run and the season-ending injury to ace Johan Santana in the 2013 preseason. His shoulders also carry the hopes of a team whose championship drought is closing in on 30 years. “I think everybody wants to be the ace of a staff and that’s my goal,” Harvey said. “I want to be one of the best, and leading the staff is kind of a start to it. I’m striving to do that.” 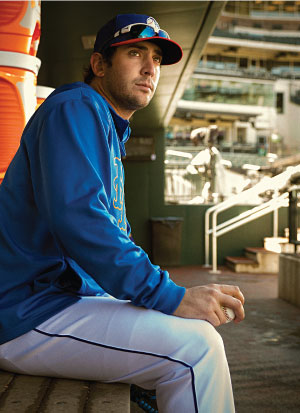 He’s always wanted to do just that, growing up on the shores of the Long Island Sound, except back then he rooted for the Yankees. As a young, budding hurler, he studied how pitchers handled themselves and the opposition, whether it was one of the local squads or catching a west coast game on tv before bed.

He was drafted in the third round out of Fitch High School and went to pitch for the University of North Carolina. He won 22 games over three seasons as a Tar Heel before the Mets selected him seventh overall in 2010. While some pitchers, even the highly thought of, highly paid draftees, take some time to get through their team’s minor league systems, Harvey blitzed through St. Lucie, Binghamton and Buffalo in a year-and-a-half. When Dillon Gee was sidelined with a blood clot in his right shoulder, the Mets called up Harvey, who posted a 7-5 record and 3.68 ERA in the minors.

On that steamy Arizona night, Harvey dominated over 5 1/3 innings, giving up no runs and striking out 11 while also recording two hits at the plate—a proud day for the son of a hitting coach. The Mets ended their slide with a 3-1 triumph. “I’m a big competitor, no matter what the situation is,” Harvey said. “My main goal is to win the game. I really didn’t feel like it was any other baseball game. It was a little bit bigger stage and the hitters were obviously a little bit better, but I tried to stick to my approach.”

His second-half performance masked a modest 3-5 record. Harvey surrendered three or fewer runs in every start but one, seemingly thriving against intra-division clubs late in the season. He dominated Philadelphia twice and struck out 10 Nationals over five innings in his second-to-last start. Earlier this season Harvey picked up where he left off. He fired seven innings of one-hit ball in the season’s second game against San Diego. The following week he went on to shut down Philly over seven innings.

It’s to the point where pundits are likening his start to that of a fireballer nearly 30 years ago: Doc Gooden, who won the National League Rookie of the Year and Cy Young Award. The 2013 Mets were picked to finish in the middle of the pack in the NL East.

Still, fans will bide their time, waiting for right-handers Zack Wheeler and Noah Syndergaard, as well as catcher Travis D’Arnaud, to mature. They’re the other kids who fans hope become household names in Queens and beyond.

Harvey isn’t so skeptical. While he’s part of their future, he’s not looking too far into the crystal ball. “If I’m thinking about the future, I’m not going to be completely focused on what’s at hand,” he said. “For me, it’s not about the future; it’s about right now.”

The book on Harvey is that he has a golden arm, pitchability and the mental makeup to handle New York and lead a pitching staff. However, he isn’t a finished product, which is why he’s leaned on pitching coach Dan Warthen, Santana and other veterans on the staff. “Right now I’m just working on throwing everything for a strike,” Harvey said. “I don’t want to get in the routine of having to get everybody out with the fastball. I want to be able to throw a 2-1 curveball for a strike, to command my slider and my changeup and really be able to throw any pitch at any time. That’s something that all pitchers try to work on.”

Harvey’s out to validate last season’s second half and prove he isn’t just any other pitcher. His goal is to make this year’s late July games must see tv, even if it’s late on a weeknight.

On The Farm
By draft and by trade, the Mets have built a strong stable of talent in their minor league system. They aren’t quite ready for the bright lights yet, but it won’t be long.

Zack Wheeler
| Right-handed pitcher |
Wheeler’s potential is undeniable. He was the big fish in the deal that sent Carlos Beltran to San Francisco and Mets fans are dreaming of a 1-2 punch with Harvey and Wheeler. Command has been an issue for Wheeler, but he features a mid- to high-90s fastball and strong secondary pitches.

Noah Syndergaard
| Right-handed pitcher |
Texas has a way of producing big, strong pitchers and Syndergaard most certainly qualifies as that. He was one of the prizes in the RA Dickey trade to Toronto and the Mets are hoping he’s a cornerstone of their rotation for years to come. Syndergaard is still at least a year away, but like his home state, he features mid-90s heat and room for growth.

Rafael Montero
| Right-handed pitcher |
While Harvey, Wheeler and Syndergaard draw the majority of hype, Montero has dominated everywhere he’s been. He earned the Mets minor league pitcher of the year award in 2012 going 11-5. His arm isn’t quite like any of the other three, but he has his share of upside.

Travis D’Arnaud
| Catcher |
John Buck’s arrival as part of the Dickey trade to Toronto probably delayed calling D’Arnaud up to the bigs. He already thrived in a season of minor league ball, batting .333 with 16 homers and 52 RBI. Originally a prospect for the Phillies, D’Arnaud has the distinction of being involved in trades for two Cy Young Award winners—Dickey and Roy Halladay.