So many problems, so little time. In a world under constant assault by its most notorious inhabitants, there are scars and gushing wounds at every turn. The assailant is man, and he, she and every other living, breathing, procreating thing may soon fade away, the victims of runaway greed and self-centeredness.

When you have a lot, it’s easy to forget those who have less. And in a world where money equals power, those without money are surely without power. They desperately need an advocate, someone among the power elite with both resources and a conscience—someone who is willing to carry a torch on their behalf.

Enter Sir Richard Branson. His Virgin brand is comprised of more than 360 companies and he personifies mega-success in the world of business. But at 58 years old, he is now changing his thrust and trying to leave the planet in better shape for those who follow. He is becoming less focused on the business of making money and more concerned about the business of using money to save lives—perhaps every life on the planet. And he is using the human and financial resources of his massive business empire to that end.

“[The problem] is enormous,” Branson says, adding that he is partly to blame. “I’ve got four or five different airlines. And, therefore, I’ve got the responsibility to do something about it.”

To help resolve the crisis he unwittingly contributed to, Branson has launched Virgin Unite, a not-for-profit charitable foundation that mobilizes the Virgin Group’s staff and customers into a veritable army of volunteers and fundraisers to assist a network of grassroots charities. In particular, emphasis is placed on economic development. Working in a well-oiled partnership with more than a dozen charitable organizations around the world, Virgin Unite has also established an online donation center and monies are pouring in.

The goal, Branson says, is to make a “sustainable difference on both the global and local levels” on important social and environmental issues. All of the operating costs are underwritten by Branson and the fundraising efforts of his numerous Virgin enterprises. As a result, all of the money that is collected goes to fund the causes Virgin Unite champions.

Not all problems have solutions, of course, and there are some scientists who suggest “earth in the balance” that former Vice-President Al Gore first wrote about a decade-and-a-half ago may already have tipped too far into the danger zone to be fixed by man’s Johnny-come-lately efforts. Still, Branson feels it’s worth a try.

Scientist, author and Branson friend, Dr. James Lovelock, believes the only hope is to be found in effective technologies that reduce carbon in the atmosphere. To that end, Branson announced The Virgin Earth Challenge in early 2007. Its lofty goal: To save the Earth. Branson and Virgin are offering a $25 million first prize for any person (or organization) who comes up with a plausible way to reduce carbon in our atmosphere, and help reverse global warming and the accompanying rise in sea level, all without causing any harmful environmental side effects.

“We’ve got Cambridge University going through all the submissions,” he says, trying to determine which ideas are viable and which are not. “We’re just trying to make sure we don’t miss any that have the answer.” 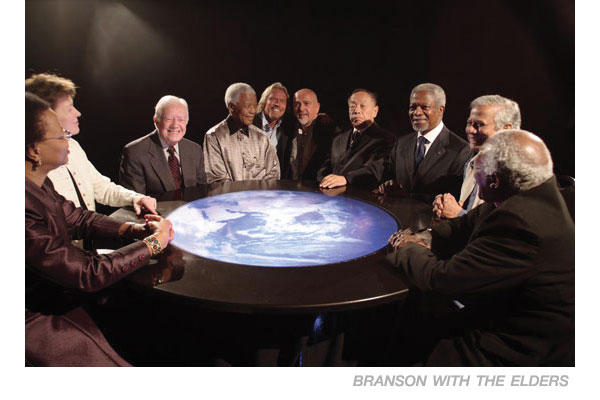 He believes that Gore’s book and film An Inconvenient Truth have done more to get people thinking about global warming than anything else has. “When the U.N. comes out with their terrifying statistics, they’ll be read about in the serious papers and maybe even catch the headlines,” Branson says. “But An Inconvenient Truth has been seen by school kids right through to their grandparents, and that keeps people thinking about it, and giving it the prioritized attention that global warming and the environment deserve.”

Mr. Gore has been criticized by some for scientific inaccuracies, but Branson counters that Mr. Gore has been committed to the environment “ever since he was a student…so he’s not a sudden convert. He’s been speaking with the same voice throughout his life.” As for the mistakes critics have pointed to: “If you look closely you’ll discover it’s basically extreme Republicans who’ve gone over every word with a fine-tooth comb. You’re obviously going to find [some] mistakes,” Branson notes, but he quickly adds, “The thrust is absolutely correct.”

With hundreds of companies under his control, Branson is accustomed to juggling more than one project at a time. He’s taking the same approach to saving the Earth. Not only is he trying to keep the planet suitable for life, he’s also trying to keep people alive and well, and living in a peaceful world. Hence, The Elders.

“[Musician and friend] Peter Gabriel and I worked on this idea for some time,” Branson explains. ”It’s based on what happens in Africa, where villagers look up to their elders for advice to resolve conflicts. The world needs people they can look up to, who have high moral authority.”

Branson and Gabriel reasoned that the archetypal elder of our time is former South African President Nelson Mandela. “Peter and I asked Mr. Mandela and his wife, Graca Machel, if they would be the Founding Elders, and they agreed.” Then Mandela chose the 12 people he felt were most respected in the world to tackle some of its major problems.

It took about ten years, but in the summer of 2007, Nelson Mandela used the occasion of his 89th birthday to announce the formation of The Elders in South Africa’s capital city of Johannesburg. “We are going to look at areas where we can stop conflicts before they happen,” Branson says, “and also try and stop [ongoing] conflicts.”

“The Elders have such stature in the world that they can see anybody,” Branson reasons. The Darfur region of the Sudan was one of the first issues they tackled. “They have all spent time [there],” he says, noting that there has been some progress in settling the civil war that has heaped so much death and hardship on the region.

Then there are many health initiatives in Africa, which Branson is very proud “to coordinate the efforts of 60,000 organizations…and help them establish the best practices for fighting diseases like AIDS, TB and Malaria.”

Of all of his many accomplishments, however, tycoon and philanthropist Richard Branson hopes The Elders will be the most successful and enduring. “In this day and age,” he argues, “there should never be a need for war.

“I truly hope that The Elders will live on for centuries. And that maybe [they] can educate the world to realize that conflicts should not be resolved by arms, they should be resolved by negotiation.”
People are bright and intelligent enough to sort out our conflicts and differences peacefully, Branson feels. “It really is the only way. The fate of our future could very well depend on it.”