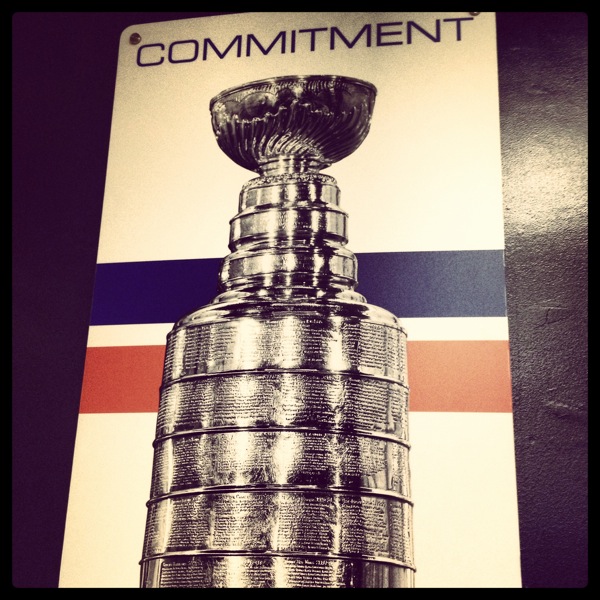 In the Islanders locker room at Nassau Veterans Memorial Coliseum there’s a photo of the Stanley Cup with an orange and blue stripe fittingly placed behind it for aesthetic value; the word commitment written on top.

There was a time in the 1980s when the NHL could have just painted the Cup orange and blue and no one would have batted an eye. It belonged in Uniondale and became a staple to the post-season adventures of the Islanders.

“It’s about commitment, it’s about focus and it’s about playing the way we need to play,” Islanders coach Jack Capuano said after a practice two weeks before the regular season ended.

It’s commitment that kept the Islanders in the playoff hunt for the entire last month of this shortened 2013 season and eventually a bid as the eighth seed in the Eastern Conference. The Islanders again, for the first time since 2006-2007, are playing for the Stanley Cup.

Of course, it’s much easier said than done. As the eighth seed, the Isles got the unlucky draw of playing top-seed Pittsburgh and were pounded in a 5-0 loss to open the series in Game 1 on Wednesday night.

With Game 2 on the horizon Friday and Penguins captain Sydney Crosby expected to make a return to the lineup after suffering yet another injury this year, there is a chance the Islanders head back to the Coliseum with an 0-2 deficit.

Even if the plug is pulled on the House that Bill Torrey Built after next season, prior to the originally estimated 2015-16 season, the Islanders have begun the resurrection process. They’re a playoff contender and that’s music to Islanders fans ears.

“The last couple of years we haven’t had the chance to play these meaningful games down the stretch,” said Islanders forward Matt Moulson. “It means a lot to be a part of that, to get these fans the wins and have a team compete for the playoffs. They’ve stuck behind us; we’d like to give them something to cheer about.”

Players noticed how energetic and enthusiastic the fans were down the stretch. Against the Rangers, versus the Panthers, when the Flyers came to town, it didn’t matter the opponent, the walls of the Coliseum were a springboard of cheers and jeers only known to a contending franchise.

“It’s important to try and have a playoff team every year,” said star center and assistant captain John Tavares. “It’s what makes the game so special. We have a great fan base and great support. They’ve been here for some tough years recently. We want to give them something to cheer about.”

Tavares, as mature as a young player can be, always says the right things. He’s the David Wright of New York hockey. He speaks of how proud the Long Island community is of its hockey team, how gratifying it would be to finish the Isles’ stay in Uniondale “the right way,” and always hammers home the purpose of tradition and heritage in the franchise.

“There have been a lot of special moments here and great things have happened in this building,” he said. “It pushes us to want to represent the Islanders well, play in the playoffs and hopefully win a Stanley Cup.”