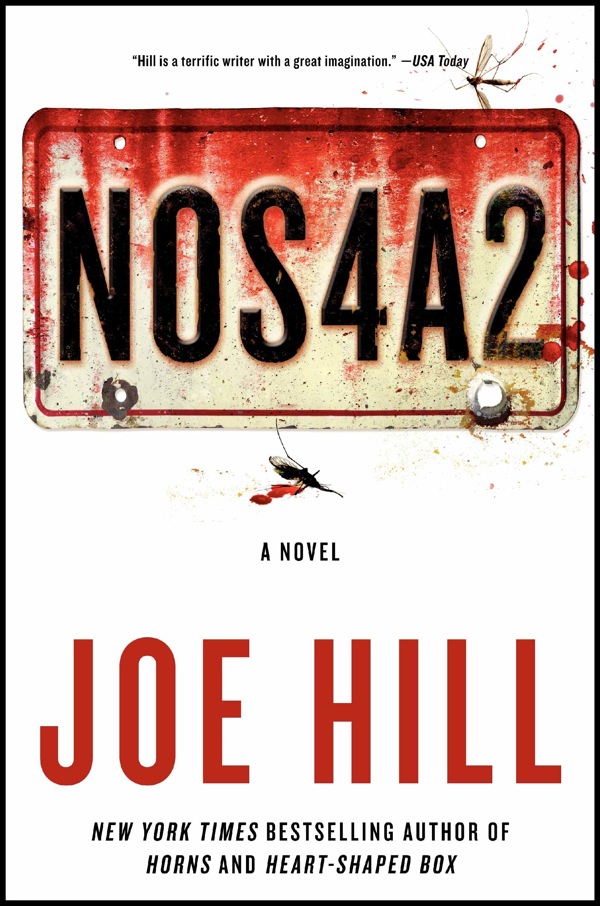 The Christmas tree is long gone.

It shed its last needle on the curb more than four months ago, looking sad without baubles on branches or gifts around its trunk. It’s probably mulch now, and that’s okay: the baubles are in a box in the garage, the gifts half-used or half-forgotten already, and you’re thinking summertime, not Yuletide.

But what if it was Christmas every day? In Christmasland it is, and in the new novel “NOS4A2” by Joe Hill, the holiday’s a scream.

For her eighth birthday, Victoria McQueen got exactly what she wanted: a Raleigh Tuff Burner mountain bike. For a kid whose parents fought a lot, the bike meant freedom and escape that summer, and a different kind of adventure: accidentally, Victoria found a bridge didn’t really exist, that followed her whenever she went across it and took her where she needed to be, when she needed to be there. But since the bridge wasn’t real, Vic figured her memories of it weren’t, either. It was like a dream: touchable, but not quite.

Charles Talent Manx loved children. He loved them so much that he tried to protect them from their parents because Manx knew that tattooed women and preoccupied fathers meant trouble. So he enticed children into his 1938 Rolls Royce Wraith, promising that they’d live with him at Christmasland, where there were gifts every morning and candy every night. No child could resist Christmasland.

And no child came out of it the same.

Vic McQueen knew this because she once escaped Christmasland by a hair. She was just seventeen then, had learned about Manx and found something that disturbed her deeply. Her visit to Christmasland was a big mistake, yet it ultimately led to good things in her life: a man she loved and a son she loved even more.

But because she’d escaped (and her magic was a threat), Manx wanted to kill Vic. He would do anything to get her. He’d even take her son. And so, Victoria McQueen went back to the bridge that didn’t exist.

Well, then. Let me just start by saying that you’re in for something good when you jump out of your skin on page 5 and you’ve got 688 pages left to read.

The funny thing is that “NOS4A2” is a novel that’s basically about good and evil, but it’s not the characters that make it so. Yes, author Joe Hill created a vile creature that’ll make you wince and a heroine who’s reluctantly heroic, but what really makes this book unsettling is that we never know where Hill hides the horror. We’re prepared for blood-and-guts, not for things dangerously innocent.

Add a few inside-jokes for readers, an ending that goes past the last page (keep reading!), and can’t-be-coincidental nods to both Hill’s parents and you’ve got an absolutely squirmy novel that’s better than anything Santa ever brought you. If that sounds like your kinda book, then “NOS4A2” is a ho-ho-whole lotta creepiness.