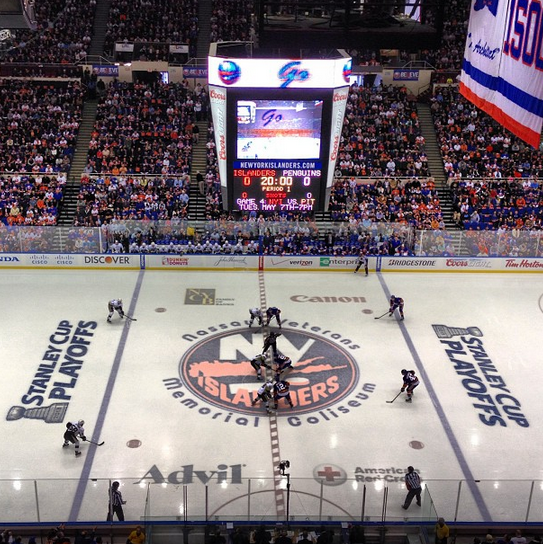 The first 10 minutes of Game 3 of the Eastern Conference quarterfinals at Nassau Veterans Memorial Coliseum were electric. It’s as if the Coliseum was hibernating, waiting to be unleashed for a playoff appearance. In terms of emotional output, the 41-year old building hasn’t aged a bit since its last post-season bid in 2007, or the spattering of appearances in the three decades prior.

The stadium scoreboard read “16,170 strong” and “rock this barn” at various times throughout the Sunday afternoon showdown between the Islanders and Pittsburgh. With the series tied 1-1 after the Islanders’ invigorating Game 2 victory in the Steel City, fans brought ample support and packed the old barn in droves.

The joint was buzzing after the Islanders opened with a 2-0 lead thanks to goals by Matt Moulson and Casey Cizikas, but eventually the Penguins became the Penguins again and spent the next period and a half capitalizing on small gains and taking a 4-2 lead into the third stanza.

Then Frans Nielsen found an open Kyle Okposo in transition on a short-handed opportunity. He erupted down ice and beat Penguins goalie Marc-Andre Fleury on a breakaway goal at the 5:31 mark of the third. The old barn was alive again.

Like a strategic move from the fans playbook, the Coliseum Faithful poured it on thick with their chants of “FLUERY,” using their Long Island charm to get inside the goalie’s psyche. Even during television timeouts, while the ice girls were clearing the cold shavings off the playing surface, fans still managed to focus on Fleury. There’s nothing like playoff hockey on Long Island when emotions are ripe.

Still trailing 4-3, John Tavares used his sniper scope to nail a shot past one defender on a narrow angle to beat Fleury and send the Coliseum into a frenzy at 9:12 of the third. “MVP” chants rang through.

Eventually the game went to overtime and the Islanders faltered on yet another penalty kill, allowing the Penguins to win on the error of special teams. Pittsburgh scored three power play goals in the game.

The crowd was noticeable for both teams. Before the contest Penguins coach Dan Bylsma warned his team that the building would be much different than the regular season. During his post-game press conference there were some minor microphone volume issues. It was very loud when he initially spoke.

“Whoa, excuse me,” he said. “That was like the building tonight.”

No Islanders player had ever experienced a playoff game on Hempstead Turnpike.

“People here are some of the most passionate hockey people I’ve ever seen,” said Tavares. “They have a lot of pride and love the tradition of the New York Islanders. We fed off that and we’re excited for that coming up in Game 4.”

Besides the usual adulation for Tavares, perhaps no one has been lauded as much in recent weeks than Okposo, who has proven to score, pass, defend and fight as well as anyone in the league right now.

“I haven’t heard the building that loud since I’ve been here in the last five years,” he said. “There is a lot of energy in this building. We appreciate the fan support. They were our seventh man.”

The seventh man has helped a ton over the years. The Islanders are 77-39 all-time at home during the playoffs and have outscored opponents, 453-325.

In years past, you wouldn’t shutter if the Islanders seemed down and out after losing an overtime playoff game at home to the top-seed. This year feels different. The players and coaches say all the right things, because they’re feeling and acting like a group of players with perspectives far beyond their years.

“The sun is going to come up tomorrow,” said Islanders coach Jack Capuano. “It takes four to win the series. We’ll get some rest and recovery and watch a little video. We’ll battle back. At this stage if you want to be a world champion, you’re going to go through ups and downs in adversity that you’re going to face, so I don’t worry about our hockey team.”

“We’re down 2-1 in the series, but we’re right in it,” he said. “We’ve proved to ourselves we can play with them and we can take it to them.”