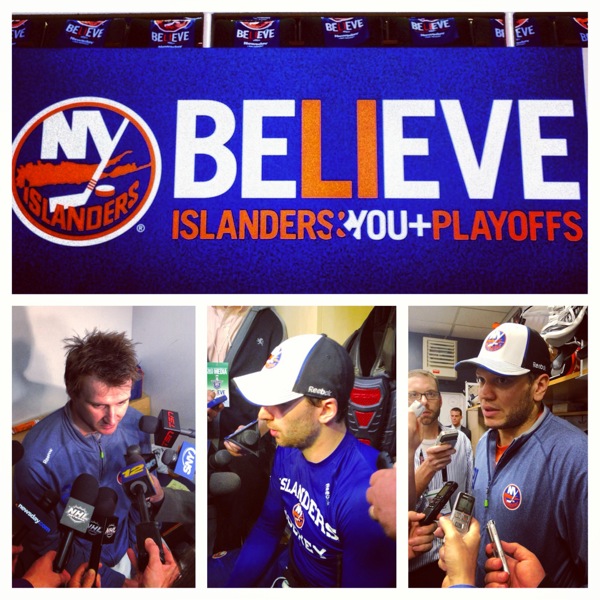 Somewhere between taunts of “Princess Crosby” and “Fleury,” the Coliseum faithful bellowed “MVP” again during the Eastern Conference Quarterfinals.

John Tavares came through with his most clutch career goal yet at 9:49 of the third period of Game 4 to put the Islanders ahead for good over the Penguins, sending 16,170 fans into a frenzy.

Tavares faked twice past a defender, shot once on Marc-Andre Fleury, grabbed his own rebound, and buried a shot that he said is one of the shining moments in his career.

“It’s right up there, that’s for sure,” he said. “I’ve had a great four years and I’m just trying to stay focused on the moment.”

Pumping both fists and howling at the crowd as the goal horn sounded, Tavares was certainly feeling the adulation. It marked the first time the Islanders won a home playoff game since 2002.

The crowd noise and atmosphere continues to be a difference maker. As the Islanders match the Penguins stride for stride, so does the Coliseum walls, bouncing off-the-chart fan volume back onto the ice in a spirited cycle of pandemonium.

“It’s an old building, but this place gets rocking,” said Tavares. “These people are passionate, that’s for sure. Got some great sports fans in New York, especially on Long Island and they care about their Islanders.”

The “MVP” calls should be strong during Game 6 when the Islanders return from Pittsburgh, win or lose. Finishing as one of the top scorers in the NHL during the regular season, Tavares has increasingly been called “elite” by players and coaches both in orange and blue and of the opposition.

His goal to take the lead in the third period has to be considered one of the most clutch post-season goals in Islanders’ modern history. Considering they only made the playoffs a handful of times since the turn of the century, it’s an obvious historic sentiment.

“Johnny’s been our MVP, the league MVP all year,” said Islanders forward Matt Martin. “He’s so talented. He’s out late in practice working on things he needs to work on and that’s what makes him one of the elite.”

“Your best players have to be the best and that’s what Johnny was tonight,” added Islanders coach Jack Capuano.

Quotable … John Tavares on the Isles’ success: “We obviously started doing some good things and just kept building. We started to find the way we needed to play. We got contributions offensive and defensively from everybody down our lineup. We see the success and I think that strives you to want to keep getting better and pushing yourselves. When you see that we can be successful that way, it only makes us better. It comes from what we’ve done over the last six or seven weeks getting into the playoffs. You put so much effort to get here there was no doubt we wanted to make the most of this opportunity. We believe in this room. We have a lot of character and a lot of guys who are stepping up for us.“