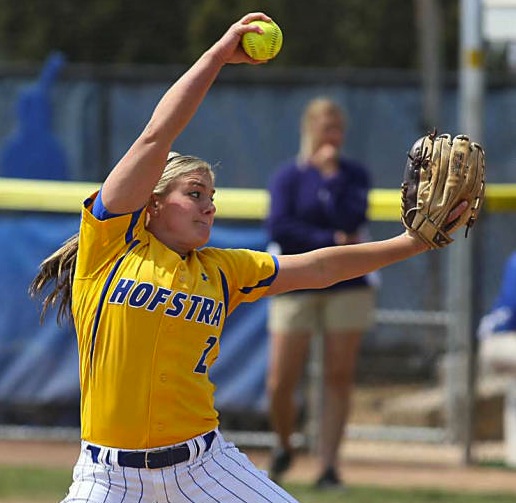 Whether she throws a record sixth perfect game or not, Olivia Galati is the greatest athlete in Hofstra University sports history.

Galati, who hails from West Babylon, N.Y., and played at St. John the Baptist High School, threw her fifth career perfect game in an 8-0 victory over James Madison in the Colonial Athletic Association (CAA) semifinals Thursday.
Galati and the Pride advance to the CAA finals on Friday at noon.

Aside from her five perfect games, she has thrown 12 career no-hitters, 20 shutouts this season and her scoreless inning streak is now at 36 1/3.

According to Hofstra, the five career perfect games are now tied with Jen Mineau of Fordham for first all-time in NCAA history and her 20 shutouts and 370 strikeouts both lead all of NCAA Division I softball this season. Her 36 wins also lead the nation. The perfect game was also the first in CAA Softball Championship history.

In Hofstra’s long and proud history, there are only a handful of athletes who could be mentioned in the same conversation as Galati. No single athlete in their respective sport has achieved as much individual success. You could argue that Doug Shanahan did since he was named the inaugural Tewaaraton Award winner, as the top Division I men’s lacrosse player in the country, all while also staring as a defensive back on the football in the fall.

You could argue that players like Speedy Claxton, Norman Richardson, Charles Jenkins, Wayne Chrebet or Marques Colston are all worthy of being in the same breathe as Galati. None of them were nearly perfect in their collegiate careers and almost all of them grew in success beyond the boundaries of Hempstead Turnpike.

Considering softball has limited professional elevation, what Galati is achieving at this level now needs to be seriously looked as the greatest individual sporting achievement in Hofstra history.

Just wait until she gets perfect game No. 6 sometime in the NCAA Tournament. ESPN will call. SportsCenter sounds nice. An appearance in the College World Series will be outstanding. And the eventual jersey retirement and Hofstra Hall of Fame induction are inevitable.