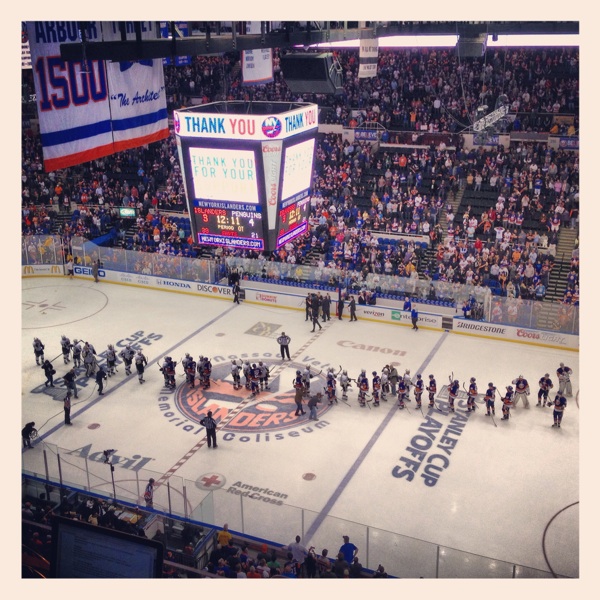 The score read Penguins 4, Islanders 3, and the Islanders were officially eliminated from the playoffs, but the crowd said otherwise.

In a fitting tribute to how far the Islanders have come as an organization in a short amount of time, fans in attendance after the team lost Game 6 in the first round of the Stanley Cup playoffs cheered as if the team actually won.

The “Lets Go Islanders” chants at the end were as loud as they were around 7:05 p.m. when the opening face-off took place.

Like they did on fan appreciation night, players skated around the ice and raised their sticks to the stands. The Coliseum faithful applauded the work ethic and resurgence of this franchise. The perception has officially begun to change.

Hip-hop and hockey normally don’t mix, but the Islanders entrance song during the post-season was apropos for the surge and journey the franchise took in 2013 towards a playoff run.

Given an insurmountable task as the eighth seed in the Eastern Conference to challenge the top-seeded Pittsburgh Penguins seemed liked a one-sided series to anybody but the Islanders and their fans.

Prior to the shortened 2013 season most media didn’t give the Islanders a chance, but they managed to stay hot for all of April, only losing one game in regulation, and keeping fans at the edge of their seats as the team went up and down the standings and eventually clinched.

In Game 6, the Islanders were the better team. They had more scoring opportunities, hit more and played with a rush that is necessary in the playoffs. It just wasn’t enough.

“You can learn a lot about what it takes to be in the playoffs,” said Islanders star John Tavares, who opened the game’s scoring in the first period. “Hopefully we all understand it’s going to take even more to win a series. It’s tough to take it all in right now. It’s just disappointing. It’s a great group of guys; a character locker room and you can see there’s something coming here.”

“We took huge strides as an organization and not many people gave us a chance to get where we got,” he said. “We got to this point because of our leadership, our character and the guys we have in that room and they put it on the line every game we played.”

For those keeping track, the Islanders are scheduled to move out of the Nassau Coliseum after next season and start playing in Brooklyn at the Barclays Center in 2015. Politics, zoning and real estate news aside, the franchise appears headed for Brooklyn no matter what. For the core of young players on this team, they should feel honored and lucky they’ve experienced an adrenaline filled playoff atmosphere in the old barn. It doesn’t get much louder than that.

“Our fan base is loud, motivated us and provided us with a lot of energy,” said Matt Martin, who infused that energy with his massive hits throughout every playoff game. “They were great through the end of the regular season and the playoffs. It’s exciting playing in a building like this, a lot of fun. In my opinion this is probably the loudest building in the league now.”

It always has been, it just took some gritty young kids to wipe away the settled dust and cobwebs.

The team’s off-season task list should be set in stone. General manager Garth Snow will assess the contracts of unrestricted free agent captain Mark Streit and goaltender Evgeni Nabokov. With this playoff run, his team’s image has surely changed, meaning more free agent talent will be interested in wearing the orange and blue.

“Anybody who watched the games saw the crowd and the atmosphere here in the building,” Capuano said. “We have some good players and we can attract some players. They should realize we have a good young core of guys, we have some good veterans and I’m sure we opened some eye from people around the league.”