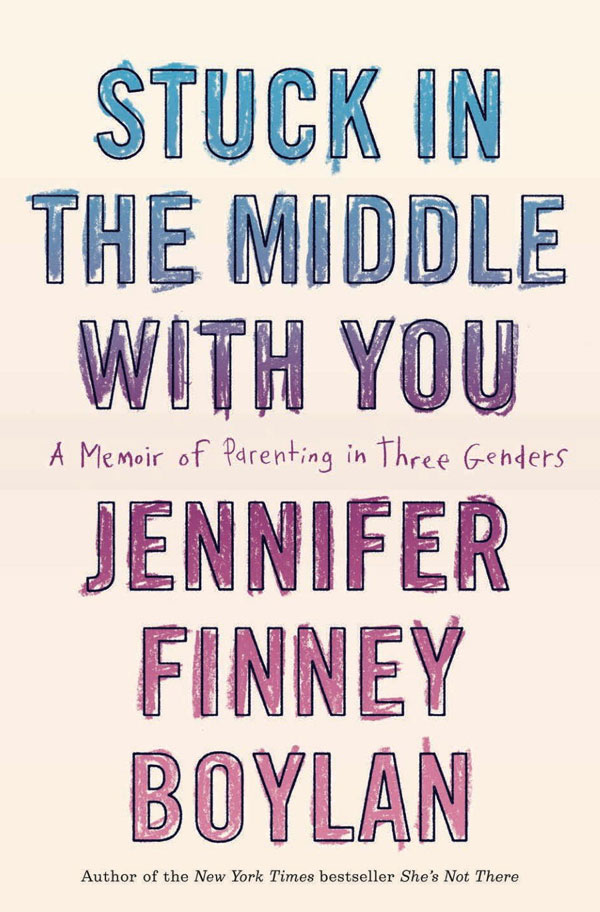 When you were younger, you wanted nothing to do with parenthood.

Life was a party then and having a family was the farthest thing from your mind. Kids changed people and who wants that? Being a parent was something that happened to somebody else.

Once upon a time, Jennifer Finney Boylan thought that, too. But then she became a father. And then she became a woman and in her new memoir, “Stuck in the Middle with You” she writes about finding love, discovering life’s sweet spot, and being a mommy and a daddy.

Well over twenty-five years ago, James Boylan fell in love at first sight.

He remembered seeing Deirdre’s blue eyes from the audience as she performed onstage. He knew he had to ask her out, that he wanted to be her boyfriend. After she finally said yes to a date, it wasn’t long before she said yes to marriage and yes to a family. They welcomed son Zach first, and Sean a few years later.

And then James Boylan told his wife something that he’d been struggling with for his entire life: deep inside, he was really a woman. He could no longer tolerate life in hiding. After six years of being a father, James needed to live as Jennifer.

So how does a woman teach her son about being a man? Would the boys be teased, ostracized, or ashamed? Would they feel as though they lost a parent?

“What kind of men would my children become,” says Boylan, “… having been raised by a father who became a woman?”

As it turns out, Boylan shouldn’t have worried. Her eldest became an activist and works for justice. Her youngest is a fine musician. Their lives weren’t much different from that of their friends, and everyone generally “forgot that there was anything extraordinary about our family.”

Today, Boylan is still married to her wife of a quarter-century. It’s as “nontraditional” a union as you can imagine but then again, “traditional” families are no longer the norm anyhow. And besides, says Deirdre, “No matter what else you say about my husband, she’s an amazing woman.”

And though parenting memoirs replicate like rabbits these days, “Stuck in the Middle with You” is a pretty amazing book.

With her slightly-askew humor and a grateful sense of awe for her family’s relative ease in her transition, author Jennifer Finney Boylan writes from the heart on the subjects of being father and mother, son and daughter. Those four roles were obviously played out by the same person, but it’s interesting to note how Boylan sees herself differently (and similarly) in each of them, pre- and post-transition. I also enjoyed her observations on connections between past and present, which nicely accompany interviews with friends and colleagues about family, children, and being a child.

Readers looking for scandal won’t find it here, but if you want something that’ll bring you to the brink of tears again and again, this is your book. Wanting “Stuck in the Middle with You” should be apparent.