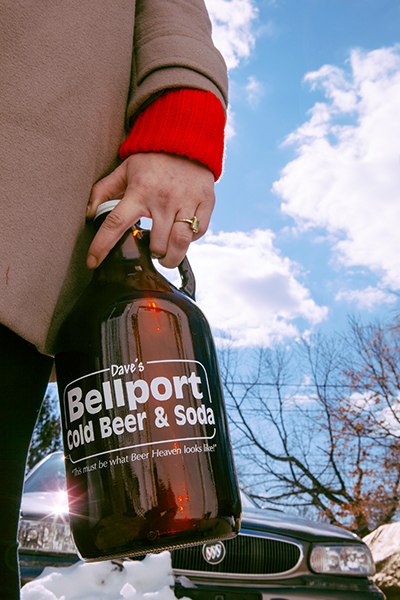 I discovered the severed remains of eight A&S mannequins in an abandoned bank vault, individually wrapped in vintage He-Man and the Masters of the Universe twin bed sheets. After three hours of intense Faron Young-themed Zumba, we—

David Schultzer, owner of Bellport Cold Beer & Soda, acquired the store, previously Station Beverage, in 1997. He started cellaring beer in 2003 and has accumulated 100+ kegs and bottles, not including vintages, or different years, of the same liquid.

“My day was infinitely better when I started to sell good beer and talked with people who enjoyed learning about it,” says Schultzer. “We could have a 45-minute conversation without discussing sports and women’s undergarments. The next phase was keeping stuff to see how the taste changed over a period of time.”

Though aging beer “isn’t the best business model,” says Schultzer, he enjoys preserving items for customers “who don’t constantly hunt for bottles and may have missed out on a lot of cool stuff.” He started the event for Long Island Craft Beer Week’s inaugural year in 2011.

“It’s just something different. We can always have a regular tasting or event, but this a special one.”