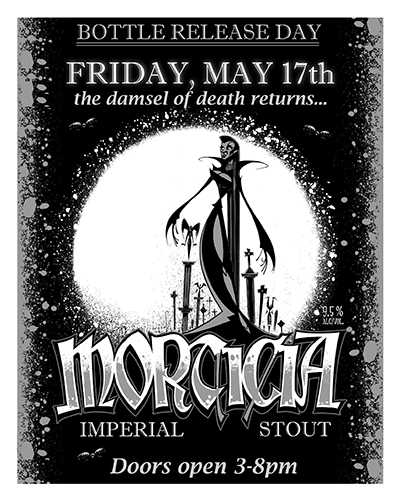 The latter, a raven-colored 9.50% ABV imperial stout, was placed in 1,111 bottles and released at the Oceanside-based brewery on May 17 amid cobwebs, coffins, and other humorous macabre paraphernalia. Though Morticia Imperial Stout debuted at Barrier Brewing Company’s first location, 3595 Lawson Boulevard, in 2011 (the brewery moved to 3001 New Street A2 in 2012), the beer has not appeared since. The latest batch possesses an identical recipe, but was also bottle-conditioned with maple syrup.

“The beer was a little too hoppy, so we brewed another batch and blended them,” says Evan Klein, co-owner of Barrier Brewing Company. “I was really pleased once it was bottled with the addition of syrup.”