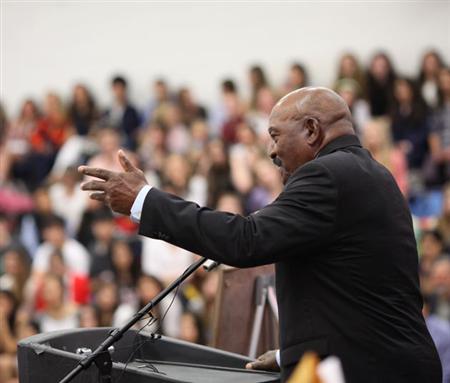 Of the thousands and thousands of athletes to grow up and play high school sports on Long Island, none are more famous or popular than Jim Brown.

Growing up in Manhasset and gaining worldwide fame as a star in the NFL and on the big screen in his post-playing days, Brown returned to his alma mater in late April to receive his “Hometown Hall of Fames” plaque.

“This school formed my life, gave me my foundation and taught me to never give up,” said Brown.

On hand at the ceremony was Pro Football Hall of Fame Enterprises President and CEO George Veras.

“The plaque presented to Manhasset High School today in honor of Jim Brown makes this school an official extension of the Pro Football Hall of Fame in Canton, Ohio,” said Veras.

Brown, who won 13 varsity letters in five sports at Manhasset, starred in lacrosse and football at Syracuse. He was the first player selected in the 1957 NFL Draft by the Cleveland Browns and led the league in rushing yards for nine straight seasons before retiring on his own terms. He was inducted to the Pro Football Hall of Fame in 1971.