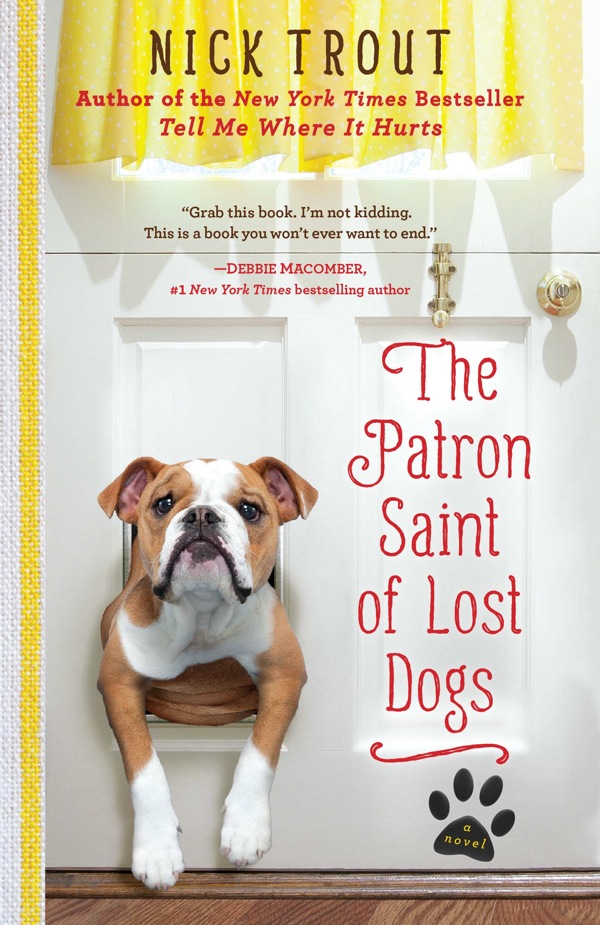 The package was wrapped so nicely.

The paper was festive, the colors zesty with frou-frou ribbon and a shiny bow on top. Surely, if it was possible for someone to make a career out of wrapping gifts, it was such a person who wrapped this one.

Too bad it was a gift you never wanted.

Yes, we’ve all had them: odd presents, awkward presents, thought-that-counts things. And in the new book “The Patron Saint of Lost Dogs” by Nick Trout, this unwanted gift was a big one…

If his life hadn’t fallen apart back in South Carolina , veterinary pathologist Dr. Cyrus Mills would never have returned to Eden Falls, Vermont.

There was nothing in Vermont for him anymore, really. His mother was dead. His father had only recently taken his last breath, although Bill Cobb had been dead to Cyrus for fifteen years. And with no family there and only bad memories, Cyrus couldn’t see any reason to return.

But there was no reason to stay in Charleston , either: Cyrus’ medical license had been recently suspended in a not-quite-resolved scandal and he was near-penniless. So when he learned that he’d inherited his father’s veterinary practice, Cyrus knew where he could get the money to clear his name.

But he was wrong.

The Bedside Manor for Sick Animals was very sick itself. As hard-hearted as Cobb was to his son, he was a beloved doctor but a poor bill-collector, and a softie for his patients and their owners. Many Eden Falls residents owed Bedside Manor money. Vendors had cancelled contracts. Equipment was outdated and supplies were low. The clinic needed emergency treatment.

All Cyrus wanted was to sell it off, but he learned that it wouldn’t be easy, especially since many people, including the clinic’s few employees, relied on Bedside Manor in many ways. He hated what the business represented—an absent, distant, uncaring father – but he wasn’t just going to give it away.

So you say you’re in the mood for something light, maybe a little romantic with a pinch of mystery. You want fiction, but some authenticity would be welcome. And that’s why you want “The Patron Saint of Lost Dogs.”

It’s no accident that realism lies in the pages of this debut novel: author Nick Trout is also a veterinarian, so the knowledge of his esoteric-fact-loving main character is legitimate as well as entertaining. I loved the geekiness of Trout’s Cyrus Mills, in fact, and I loved the Bedford-Falls-like neighbors and clients he had – which is not to diminish the roles of the various pets, all equal cast members in this sweetly gentle book.

This is the kind of novel you can hand to your grandmother, loan to your teen, share with your friends, and recommend to your book group. It’s Cute with a capital “C,” and you should read it. For anyone who loves a pet and a good novel, “The Patron Saint of Lost Dogs” is the total package.