» The Victim
Sure to put a chill in the summer air is The Victim, by respected Italian-born playwright Mario Fratti. It’s a plot-twist-a-minute chiller by the prolific Mr. Fratti, whose biggest U.S. claim to fame is helping adapt Fellini’s film, 8 ½, into the Broadway musical Nine. Frederic DeFeis, who founded Arena Players 63 years ago, stages The Victim (July 12-Aug. 4) at the company’s new-ish home at the Vanderbilt House in Centerport.

» RFK
Political drama? In summertime? That’s almost a revolutionary act. Still, those who long for a time in America when elected office was ever-so-slightly less cynical should warm to RFK, Jack Holmes’ bioplay that ran off-Broadway in 2005. In his rave review of the show’s off-Broadway debut, NY Theatre Wire critic Martin Denton wrote, “the structure and simplicity of the piece are masterful…there’s always plenty of time for ideas—which are plentiful and important, to sink in.” RFK runs June 8-30 at Broadhollow’s Studio in Lindenhurst.

» The Cripple of Inishmaan
It’s comedy with a cringe. Arguably the best play by Beauty Queen of Leenane author Martin McDonagh, The Cripple of Inishmaan tells of a poor, oft-abused young man whose big dream is to snag a role in a documentary being filmed in a nearby village. Stephen Hamilton stages this homegrown Guild Hall production, through June 9, in East Hampton.

» How the Other Half Loves
Alan Ayckbourn is another playwright who specializes in showing people at their most embarrassing worst while in social situations. He’s also a genius at adding puzzle-like structures to his plays, such as when he tracks groups of people in different locations simultaneously. You’ll find that in his first Broadway success, How the Other Half Loves, which is being revived by the Hampton Theater Company in Quogue, through June 9. Diana Marbury directs this look at two couples who drag a third into their dinner parties—and marital discords. 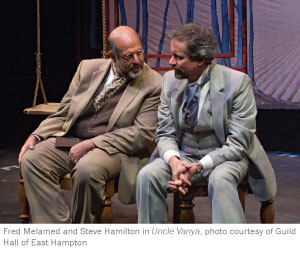 » South Pacific
One of only eight musicals to win the Pulitzer Prize and considered by some to be Rodgers and Hammerstein’s finest hour, South Pacific looks at love versus intolerance during wartime. Winner of the 1949 Best Musical Tony and featuring such tunes as “Younger than Springtime” and “I’m Gonna Wash that Man Right Outta My Hair,” South Pacific, staged by Igor Goldin, washes into the John W. Engeman Theater through July 14.

» It Happened One Act
While the big theaters busy themselves with musicals and moneymakers, the 13-year-old Minstrel Players is offering its second-annual short-play festival, “It Happened One Act.” Theater owners (and siblings) Ray and Tara Palen received 48 submissions for the fest, which happens July 27-28. The open door policy of the fest typifies the Northport-based family theater made up of minstrels who are wandering, strolling, anchored, on the lamb or otherwise affiliated.

» Born Yesterday
Now in its 34th season as a community theater, Theater Box will liven up summer’s dog days August 2-10 with Dan Bubbeo’s staging of Garson Kanin’s durable look at power politics and not-so-dumb blondes, Born Yesterday. Penned in 1946, the comedy has enjoyed three turns on Broadway, only the first of which was a huge hit, but it keeps on coming. As such, the material remains best known from the 1950 film version, which netted Judy Holliday an Oscar.

» Bloody Bloody Andrew Jackson
Yes, it was a Broadway musical in 2010, but Alex Timbers and Michael Friedman’s Bloody Bloody Andrew Jackson, which comes to the Smithtown Center for the Performing Arts June 1-23, still seems like a brave choice for summertime—especially because the piece portrays the seventh president of the United States as a rough-and-tumble, naïve, sometimes bratty, sometimes brash rock star. And where else can you hear songs with titles like, “Illness as Metaphor,” “Populism, Yea Yea!” and “I’m So that Guy”?

» Comedy
Okay, so it’s not quite Theater with a capital T, but check out the lineup of stand-up comedians at Bay Street this summer: Jim Breuer, Dom Irrera, Paul Reiser, David Brenner and Paula Poundstone. They’re not all appearing at once (hence lineup), making Sag Harbor’s main stage the best antidote to Hamptons traffic weekend after weekend.