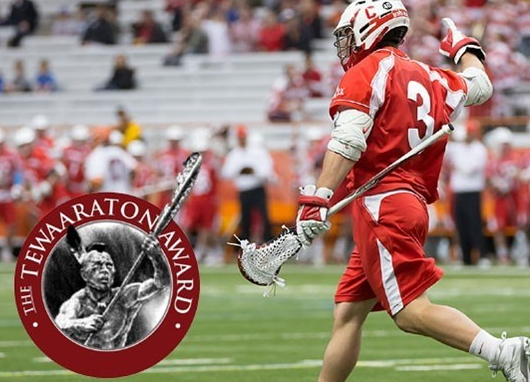 Smithtown’s Rob Pannell and West Babylon’s Alyssa Murray were both named finalists for this year’s men’s and women’s Tewaaraton Trophy, respectively, resented to the top male and female collegiate lacrosse player in the nation.

Pannell, in his fifth year at Cornell after suffering an injury that wiped him out last year during his senior season, is a two-time Tewaaraton finalist.

Murray was recently named BIG EAST Attack Player of the Year at Syracuse and leads the Orange in points with 90 this season. This is her first Tewaaraton nomination.

*Owns the longest point-scoring streak in the nation, having registered at least one point in each of his 69 career games, and he has the most career assists of any active player in Division I men’s lacrosse.

*Pannell set the Cornell record for career points (332) and career assists (193) and is third overall in career goals (139). He is the Ivy League’s all-time points leader and ranks second in conference history in career assists.

*Pannell is just the eighth player in the history of Division I men’s lacrosse to amass 300 career points is currently third overall with 332 points.

*Sixth player in school history to record 200 points in her career and ranks fifth on Syracuse’s all-time scoring list with 238 points.

The 13th annual Tewaaraton Award Ceremony will be held May 30 at the Smithsonian Institution’s National Museum of the American Indian in Washington, DC.