The invention and proliferation of the automobile in the first half of the 20th century provided a massive dose of flexibility and possibility that radically changed the American landscape. Movement is freedom and ever since the Model T, the black ribbons and yellow stripes of the great American road have become an ever-winding symbol of our collective expression and rebellion. Car Culture: Art and the Automobile, currently installed at the Heckscher Museum of Art through mid-August, chronicles our fascination with all the scenery and wreckage that constitute our love affair with cars.

This expansive exhibit is a diverse exploration of the revolutionary nature of the automobile and the effect it’s had on America’s artistic perspective. Here the automobile becomes subject, object, talisman, sex object and time machine all at once. Through Car Culture we come to see the automobile for what it really is: Our moving monolith, our salvation, our self-actualization.

Car Culture roams many winding roads and deep curves, gathering influence and ephemera along the way, featuring gelatin prints, photography, oil and canvas and metallic sculpture from a wide range of artists. Some works turn the lens on the car itself; its form, its sense of space and movement, its deconstruction (both literal and figurative), and its magic as poetry in motion. Others are a manifestation of the car’s biggest gift, freedom and perpetual motion. In its best moments, Car Culture connects us to the great American adventure and stirs our wanderlust, especially while we’re standing still.

These black and white meditations evoke the perfect American melancholy of Bogdanovich’s The Last Picture Show, an affirmation that art is found both in our sad, static spaces and when we fly down one-lane roads at breakneck speed. In a workable juxtaposition, these works feel “old,” but they speak loudly to the timeless American ethos of desperate youth, of yearning to “get out.” In seeing the America we’re desperate to leave behind, we simply cannot stand to stand still. 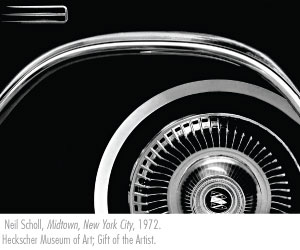 Like our Ford-inspired freedom, disposability has also become a core part of the American ethos. So have traffic, smog and pollution. Neill Slaughter’s oil on canvas, Confluence, depicts a vertiginous view of modern engineering madness, leaving us helpless in the clutches of the pretzel logic that drives our highways, on-ramps and merges. John Salt’s Desert Wreck, Walker Evans’ Joe’s Auto Graveyard, Pennsylvania, and Joseph Szabo’s The Last Trip are all stunning in their narcotic depiction of cars in decay. It’s a wonderful commentary on the trip toward our ephemeral American destiny. The car might die, but dreams never do. In the end, we ask ourselves, “Does the road go on forever?”

Many works in Car Culture invite us to hope so. Arnold Odermatt’s Oberdorf is a monochromatic moment on the open road, a simple straightaway that says “Go… and keep going.” Stephen Shore’s U.S. 97, South of Klamath Falls Oregon, July 21, 1973 is a breathless big sky depiction, its yellow fields and rusty cattle fencing is all Stephen Stills and John Perry Barlow, a bucolic daydream of every road trip ever made. Edward Burtynsky’s Oil Fields #22 captures the mise en scene of casual, clandestine disappearance, that quintessential black ribbon of road undulating into the cool, green distance.

For all its grandeur and scope, the most compelling piece in Car Culture might be Jonathan Brand’s Spark Plug 4. It’s a look at the lives of a cell, the mitochondria of the grand mission, standing naked and alone. Isolated, it fits in the palm of your hand. Put in its proper place and it will take you as far as the gravel will go.

Car Culture: Art and the Automobile is on view through August 11 at the Heckscher Museum of Art in Huntington. For more information call (631) 351-3250 or visit heckscher.org.