Jeff Beck is regarded by most critics and guitar-gods as the greatest living guitarist. When asked a few years ago who he thought is the best guitarist he said, without hesitation, “John McLaughlin.”

McLaughlin was born in England and began his career on the London blues scene that spawned most of the great British rock acts of the 1960s including The Rolling Stones, Fleetwood Mac and The Yardbirds. Unlike his contemporaries, McLaughlin shunned the pop and rock world and in 1968 joined forces with American jazz drummer Tony Williams to form the fusion group Lifetime. But it was when he joined Miles Davis on the groundbreaking 1969 album In A Silent Way that his life, and the world of jazz and rock, would change dramatically. The album marked the beginning of Davis’ “electric” period and a time when McLaughlin would become his frequent collaborator. It was followed by Bitches Brew in 1970 when the pair were joined by countless greats, like Chick Corea, to create the era’s defining jazz-fusion album and impact both rock and jazz immeasurably. 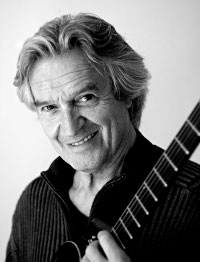 From his work with Miles, McLaughlin formed his own seminal jazz-fusion group, The Mahavishnu Orchestra, in 1971 (and again in 1984). The guitarist went on to release solo and group albums in both acoustic and electric settings, including the landmark Love Devotion Surrender with Carlos Santana in 1973. And in 1975 he formed Shakti, a group melding Indian music with jazz, making him a founder of world music long before the term was ever coined.

If McLaughlin wanted to, he could have easily pursued a career as a rock guitar god or chased pop stardom. Instead, he has been on a musical quest to explore the possibilities of guitar improvisation through jazz and Indian music. Parallel to this musical search, McLaughlin has been a spiritual seeker, exploring the philosophies of the Theosophical Society, practicing yoga and learning about Zen Buddhism through Indian spiritual Master Sri Chinmoy.

Meeting and talking with McLaughlin is a joy. Aside from his musical knowledge and passion, he is a warm, gracious and curious soul with no pop or rock star pretensions. From his home in Monte Carlo, the jazz guitar legend spoke about his extensive career.

Long Island Pulse: You were a key part of the British blues scene, playing with Alexis Korner, Georgie Fame, Graham Bond and Brian Auger. When did you first start listening to blues?
John McLaughlin: I was exposed to the Mississippi blues players from the age of 12. This was after quite a few years of studying and playing western classical music at the piano. The impact these players had on me and the discovery of “blues” music was nothing short of revolutionary for me. As you know, I ended up in the Miles school of jazz, but I think Miles never left the blues ever. In a way I feel it is an error to limit blues music to the era of the 1940s and 50s. Of course we have today great blues players such as Buddy Guy, B.B. King, Derek Trucks, Joe Bonamassa and many others, but you can hear the real blues also in the music of Miles and Coltrane.

LIP: What do you remember of the musicians you played with who would go on to play in the key rock groups that launched in the ’60s?
JM: Probably the most significant memories are the ones when I played with Georgie Fame—which was real r&b. During this period I ran into Eric Clapton who was already doing great work with John Mayall’s band. I think Eric and Jimi Hendrix made a revolution on the electric guitar, always with a lot of help from Muddy Waters, B.B. King and Buddy Guy. I recall watching an audition of The Rolling Stones in a London club. They were terrible. Out of time and out of tune! But, they were in your face and radical. This was the 1960s, don’t forget. Rock was almost against society, it was definitely looking for new ways of living.

LIP: Why didn’t you stay with blues or head in a rock direction like so many of your contemporaries?
JM: I did stay with the blues, and rock for that matter. Just because I don’t play in the conventional style of blues players does not mean the blues and rock are not in my music. In life and music we have to stay true to ourselves and assume the consequences. This is what I did.

LIP: Why did you choose to move to the United States?
JM: I was invited to join Tony Williams in the fall of 1968 to complete his Lifetime group. He was looking for a guitar player and he heard a jam I’d made…I was already known in the UK, but moving to the US was pivotal in my career. It was through Tony that I met and recorded with Miles. Of course, to be playing with Tony, and included in Miles’ recordings and concerts, gave me a status that I’d only dreamt of previously.

LIP: Your work with Miles Davis changed both rock and jazz.
JM: I had to wait quite a few years before seeing what kind of impact I had on Miles and his music, and also on what is commonly known as fusion music, or jazz-rock. In the beginning I was so excited to be with Tony and Miles, nobody thought about what kind of impact you might have on the future, certainly not me.

LIP: On Bitches Brew there is a song called “John McLaughlin.” When did Miles tell you he wrote a song using your name?
JM: He never told me. Miles never had titles on his music or on pieces…The first time I saw it was when I bought the album.

LIP: How did your work with Miles Davis influence The Mahavishnu Orchestra in the beginning?
JM: The impact and influence of Miles on me personally, and my music in particular cannot be overestimated… it was Miles who told me to form my own band. This was after a gig at Lenny’s on the Turnpike, which was a club outside of Boston. I’ll never forget. There were just the two of us sitting in the band room, and out of the blue he said, “John, it’s time you formed your own band.” When someone like Miles tells you that, you do it. That was the beginning of the first Mahavishnu Orchestra. Of course, all the work I’d done with Miles and Tony Williams was crucial to Mahavishnu. In a way, there was a greater rock influence in this band than what I’d been doing with either Miles or Tony.

LIP: I always felt Shakti was incredibly underrated—so far ahead of their time. Will you record or perform with Shakti again?
JM: I don’t know about underrated, we still have a lot of fans world-wide…though most of our concerts in the past few years have been in Asia or Europe. Tabla maestro Zakir Hussain and me are the remaining original members of the group…we love to play together and they are a very inspiring group of musicians. Jazz and Indian music have much common ground, and they are masterly improvisers.

LIP: Jeff Beck is another British rock guitar legend who has worked in the jazz idiom. Have you had a chance to work much with Beck?
JM: I think it’s safe to say that Jeff has been and remains today, my all-time favorite guitar player. Jeff and I got to know each other in the mid 1970’s when we began touring together, his band and mine. The atmosphere and music was so good, every night we ended up onstage together with both bands rocking…We’ve recorded together and played on and off over the years since then, in fact we played together in a charity concert in Monte Carlo in late 2011.

LIP: Why has the audience for jazz seemed to grow smaller and so few jazz albums are being released by major record labels?
JM: To me the word “jazz” has become very ambiguous. Since the 1960s and 70s jazz has undergone a revolution, but not necessarily a good one. If you open up your Internet radio and find “jazz”, you will find “Cool Jazz,” “Smooth Jazz,” “Funky Jazz” and more. The problem for me with these forms of jazz is that they are not jazz at all. They are full of clichés and are made mainly for “easy listening”—easy listening is not what jazz is about. I grew up with the jazz masters playing with total passion and conviction, a music that you need to listen to, not talk over. We had the same convictions and passions as classical musicians have for their music. Of course there are some great young musicians out there, but the “business” of music has been taken over by big business, for the business of making money, and this makes it really difficult for the young musician trying to make a career. If classical orchestras were formed for making money, you would have no orchestras at all. Jazz, is a marginal music for marginal people, but this does not decrease its value in any way in the world of music and art. This is one of the principal reasons why there are few jazz records, no money to be made, especially in the time of economic crisis. No support, few recordings.

LIP: What is your hope for the future of jazz?
JM: I am eternally optimistic…that jazz will have its renaissance like everything else.

LIP: What kind of music scene is there in Monte Carlo?
JM: Actually very healthy…The Monte Carlo Jazz Festival invites the perennial stars of jazz. There is a jazz cafe at the beach that features live music throughout the summer months. The classical music scene is very healthy, and don’t forget that two of the world’s oldest jazz festivals are 30 minutes away: The Nice jazz festival and the festival of Juan-les-Pins where Miles, Coltrane and many other stars have been featured over the years.

LIP: What do you do when you’re not making music?
JM: I’m a sports fan: That means I also do sports. I bike, hike in the mountains in summer, ski mountains in the winter, swim, play tennis, ping pong or any other sport that’s fun and makes you sweat! And I love to read…

Check out McLaughlin and the 4th Dimension will perform at the Blue Note in Manhattan June 18-20 as part of the Blue Note Jazz Festival.